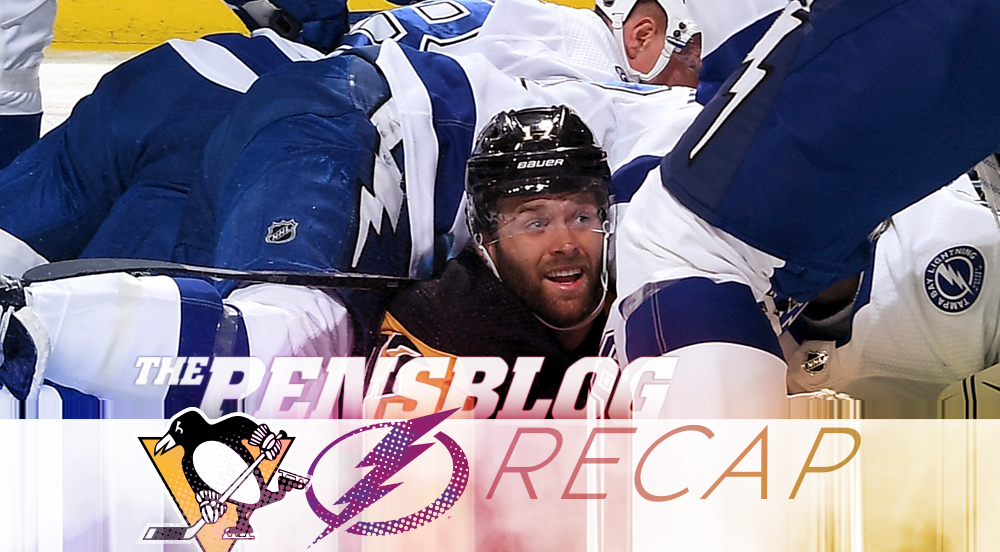 The Penguins and their newly acquired winger Jason Zucker were in the Burgh last night for a rematch with the Lightning. With Zucker in the fold the Penguins lined up as follows:

I'd overpay Zucker too if it meant getting Dominik Simon off Sid's line. Give Sid a guy who can skate and SCORE.

This argument again, if I had a nickel. Not that Flopaponi is anything to get worked up about, but the stats of Simon on Sid’s line don’t lie at this point, and neither do the events of this game.

We were underway and less than three minutes in Jared McCann was rung up for boarding Erik Cernak. I’m not sure who Cernak is, but he was upset about the hit and went after McCann to tell him he was mad. The Penguins were able to kill off the powerplay with relative ease and we went to 5v5 for the next five minutes. A guy named Yanni Gourde hooked up Jusso Riikola at the 10:51 mark sending the Penguins to the powerplay. The powerplay didn’t waste any time getting to work, Letang sent it to Crosby who fired one on net. The rebound was large and right to the stick of an awaiting Bingo Machino Geno

And the Russian scores… on Miracle on Ice Celebration Night. pic.twitter.com/h3PhoraQBW

With the Penguin’s playing a 1-3-1 powerplay structure, this is the perfect rebound. The puck splits the Tampa diamond and bounces right to Malkin. During their recent powerplay struggles, this is exactly what the doctor ordered. The Penguins were attempting to use their skill and pass their way into open players. With this approach, the Pens went around the Lightning instead of through. Is anyone talking about Crosby’s 21 assists in like 9 games played?

Following the goal, the game went back to 5v5 for basically the remainder of the period. The Penguins would get a second powerplay chance in the final minute that would carry over to the second period. By the time the final horn sounded, the Lightning had 21 scoring chances for at 5v5 while the Penguins only had 9.

Numbers after the 1st period of play ⬇️ pic.twitter.com/I7OQhL9BDC

The Penguins had 1:45 of powerplay time to start the period. The powerplay again looked sharp but couldn’t get anything done. Following that powerplay, Zach Aston-Reese was hit up with an interference penalty sending the Lightning to the powerplay. Unlike the first attempt, the Lightning were a lot more threatening on this powerplay. The puck came to Mikhail Sergachev at the point, and he fired it through a screen of about 90 players to even the game up at 1. I can’t find a gif of the goal, but this was Matt Murray’s view:

Not being able to track a 90 mph moving puck through that traffic is not something I wouldn’t blame any goalie in the league for. I was actually surprised Sergachev took this shot considering the amount of traffic in front of him.

Following the goal Luke Schenn continued his life-long streak of being a piss baby and got in a wrestling match with Malkin. The two went off for equal penalties and we went to 4v4. Partway through that period of play the Penguins had a golden chance but Rust was robbed by the crossbar.

After going back to 5v5 the Lightning really started dictating the play and Matt Murray had to be sharp often. After several minutes of tilting the ice the Lightning were given a third powerplay chance when Brandon Tanev was called for existing or something. The Penguins, and mostly Murray, were sharp killing off this opportunity. We went back to 5v5 for like 70 seconds before Kris Letang was hit up with an unsportsmanlike penalty for barking at the ref. To be fair…

Letang is a little old to still be complaining as much as he does. Keep it in your pants though Pens Chronicles, he is still crucial to this team.

The Penguins killed off the Letang penalty and escaped the period with just the one goal allowed. Other than the crossbar by Rust, the Penguins had no business leaving this period tied.

Numbers after the 2nd ⬇️ pic.twitter.com/qbdK9HRdTX

The Penguins were given an early powerplay chance to start the third when Sergachev interfered with Crosby 44 seconds in. no dice on this powerplay but the Pens did build some momentum from it. It should be noted that after the first period Sullivan switched Hornqvist and Simon on the first line and the difference was obvious.

The Penguins continued building on their momentum but Vasilevsky decided it was a good night to earn his salary. Despite losing two players during the game the Lightning were holding on, mainly thanks to the netminder. With five minutes left Dom Simon busted in on a breakaway and drew a penalty that for some reason resulted in a powerplay and not a penalty shot. Some think this is a blessing, and that’s because a lot of people don’t know that Sidney Crosby himself says Simon has the best hands on the team. Either way, the Pens powerplay stepped up with a chance to put a dagger in but Vasileksy remained large in net.

Following the failed attempt, the Lightning would get a few chances but Murray stood tall and we were heading to overtime.

The Penguins started the 3v3 with Malkin-Rust-Schultz and that trio got some looks but couldn’t get it done. The next set was Crosby-McCann-Letang and again, the trio controlled the zone but just couldn’t get a clean look. Following another change the Malkin unit got trapped on a long shift and the Lightning go their first attempt in the OT. An odd man rush against tired players in overtime is never going to end well, and this one didn’t.