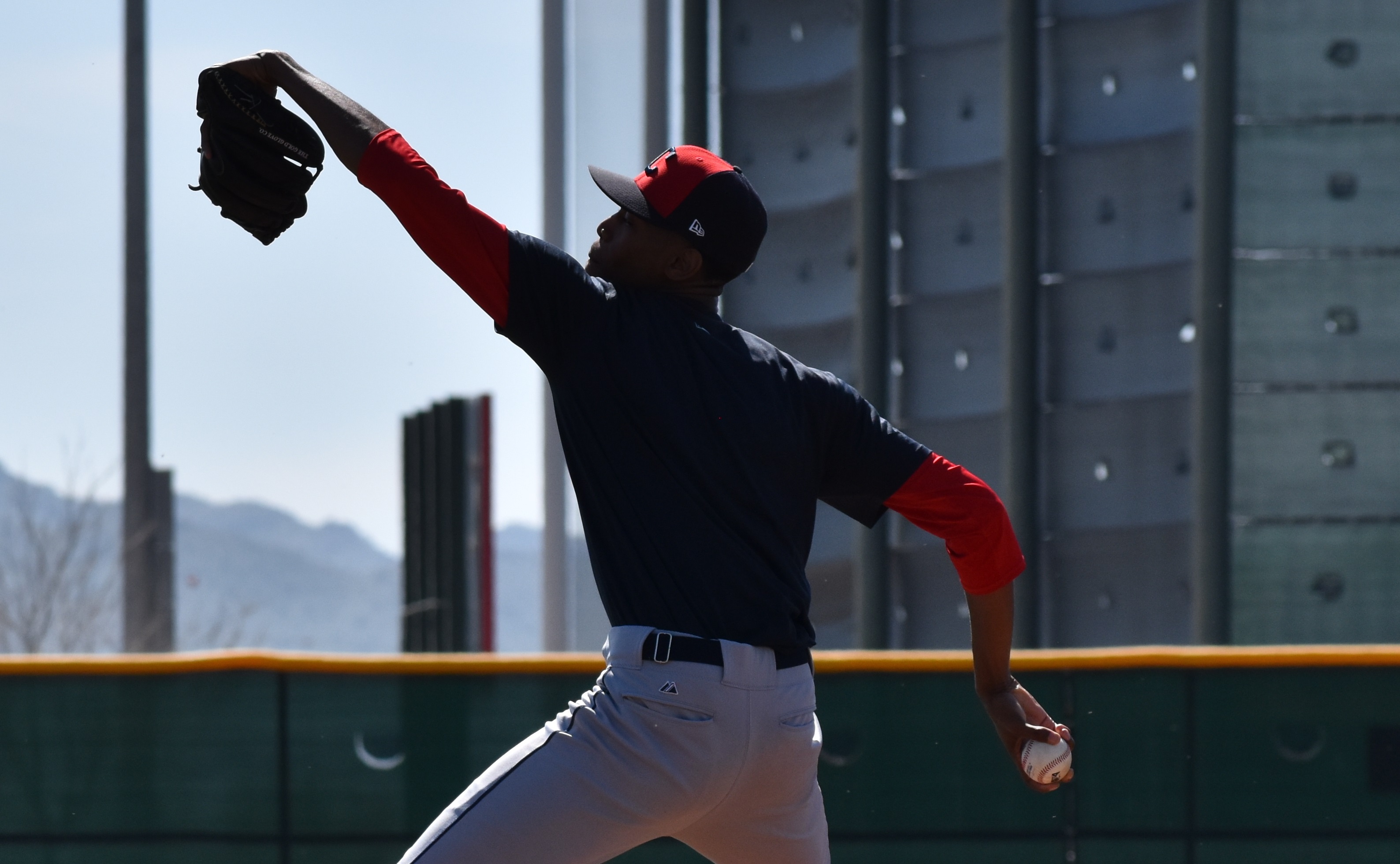 After combing through my selections for rookies most likely to debut for the Indians in each of the last three seasons earlier this week, I have decided to continue on with the tradition, but decrease the amount of picks from ten to five. Because of this, we can look deeper into the five most likely to debut in 2020 and see how they could fit in the plans for the MLB roster.

The rules, as always, are that a player has to have zero days of MLB experience to be considered and we will only be looking at players who ended 2019 in the Indians minor league system. With the drop from ten to five players, forgive me if I miss a depth relief option or September call-up.

Starting out with one of those potential bullpen options, we have a truly electric relief pitcher with closer potential. Since being drafted out of UC Santa Barbara in 2017, Nelson has posted a 13.0 K/9 over 122 innings with a 2.3 BB/9 and 0.6 HR/9. After spending his entire first season in short season A ball, Nelson vaulted through the system in 2019, starting in Lynchburg and ending in Columbus where he had a 2.25 ERA over 12 innings.

Nelson is the least likely among the five athletes postulated today to make the big league squad in 2020 as he is not on the 40 man roster yet and the Indians have a lot of new and old bullpen arms that they will likely want to sort out to start the season without muddying things up any further. However, no team makes it through the season without a relief injury or demotion and, at 23 years old, Nelson is perfectly set to break through right now.

There are two recent changes that could benefit Nelson and expedite his ascension. First is the new rule stating that a pitcher must face at least three batters before they can be removed. While he is a lefty, Nelson was actually better against right handed batters in 2019 with a line of .159/.237/.308 compared to .186/.284/.322 vs lefties. Both of these lines are obviously excellent, but his proficiency against opposite handed hitters makes him a perfect replacement option for Oliver Perez should the current LOOGY not be able to adjust to the new situation.

The second change is less official, but Terry Francona‘s use of Andrew Miller and Brad Hand in closing situations in recent seasons may show that this old dog has learned at least one new trick and isn’t afraid of using unconventional closers when the situation warrants. Adding Nelson to a group that stands to include James Karinchak and Emmanuel Clase could lead to a truly frightening pen.

I have been espousing praise for McKenzie ever since I first saw him in the 2015 Arizona League and continue to do so. He was one of the ten I picked to make his debut last season, but shoulder problems shut him down for the entire 2019 season. He is back throwing again now and I’m going to double down on this bet. Had he been healthy last season, I believe he would have been chosen prior to Aaron Civale or Zach Plesac, although that’s impossible to know now. If he remains healthy this year, he should start in Columbus and be the first available option for the big leagues.

This pick is still a bit of a gamble as he hasn’t pitched in an official game since August 30th, 2018 with the Rubberducks. McKenzie will have to maintain/regain his mid-90’s fastball while keeping the incredible command he had during his 2015-18 seasons. Overall, this lead to a 10.8 K/8, 2.7 BB/9 2.68 ERA over 329 MiLB innings. When he is on, McKenzie has great movement to his pitches and pinpoint control, making him nearly unhittable. While he may not sit in the leagues top 100 prospects anymore and fell from #1 to #7 on our own Indians prospect rankings, he is still a middle of the rotation option with ace potential.

McKenzie was added to the 40 man roster last fall to avoid selection in the rule five draft, giving him a leg up on his non-rostered competition.

McKenzie’s biggest competition for first man up in the rotation is likely Moss. He was also added to the 40 man roster in 2019 after coming from Cincinnati in the three team deal for Bauer and had an excellent debut for Akron and Columbus with four earned runs allowed in 28.2 innings. While Moss struggled a bit for Chattanooga early in 2019, his success late in the season should be considered highly enough that he could be an option in 2020. He will definitely start the year in Columbus, but would be a great option to fill in a gap in the rotation when necessary.

At 25 years old, the Indians can afford to be less patient with Moss than McKenzie (22) as they are already essentially guaranteed to control the lefty through all of his prime seasons. Another bonus with Moss is that, like Nelson, he has reverse split stats meaning that he is significantly better against right handed hitters than lefties.

Jones starts towards second for the Mesa Solar Sox in a 2019 AFL game against the Glendale Desert Dogs. – Joseph Coblitz, BurningRiverBaseball

Each of the first three players listed are pushing their way into the big leagues due to great play, but running into a bit of a wall as far as the big league roster is concerned. Jones is essentially the opposite.

This is not to say that Jones didn’t play well in 2019, but at 21 years old he generally wouldn’t be considered a 2020 MLB option based on his performances so far. However, with Jason Kipnis leaving through free agency and no heir apparent, the Indians near future infield certainly appears to be set with Jones at third, Francisco Lindor at short and Jose Ramirez at second.

There are a couple issues that could bar Jones from a 2020 debut, however. First, he had surgery on his thumb during the 2019 Arizona Fall League season. He should be recovered in time for the 2020 season, but the fact that he didn’t get a full month in fall ball could keep him in Akron to start 2020. Specifically, there are serious questions about his glove work at third and those were not answered positively during his short stint with the Mesa Solar Sox. It would make sense to keep Jones down longer so he can focus on becoming more of a complete player before his MLB debut.

In addition, given his age and gigantic potential, the Indians aren’t likely to play around with Jones unless it’s for a long term starting role. With that in mind, it is much more likely that Mark Mathias or Ernie Clement are promoted to the big leagues first, but since we’re only looking at five players instead of ten, I am trying to focus on those who would be full time players rather than bench options.

A huge portion of the haul brought back from the Nationals in exchange for Gomes, Johnson had an incredible 2019 season in Columbus and his exclusion from the 2019 September Indians roster was a travesty. Leaving him off the roster in 2020 would be an even bigger mistake.

Johnson is the most likely player of the five to make it big this year as he combines the banging at the door element of the first three with the lack of depth element that Jones could take advantage of. The Indians MLB outfield is incredibly thing with only Oscar Mercado slated as a full time starter. Every other option brings either a poor bat, poor defense or both.

Johnson, on the other hand, slugged a career best .507 last year with 19 home runs and 34 doubles while playing top level defense in center and right. He is also on the 40 man roster, giving him an advantage over fellow 2019 Clippers Ka’ai Tom, Connor Marabell and 2019 Rubberduck Mitch Longo who were all invited to MLB camp.

The Indians will likely open the season with a platoon of Jake Bauers and Jordan Luplow in one corner, Mercado in center and Franmil Reyes in the other corner with Greg Allen, Delino DeShields and/or Tyler Naquin on the bench, but that group seems doomed from the start and Johnson is versatile enough to take over any one of those positions.