Recap 57: Relegation of the D 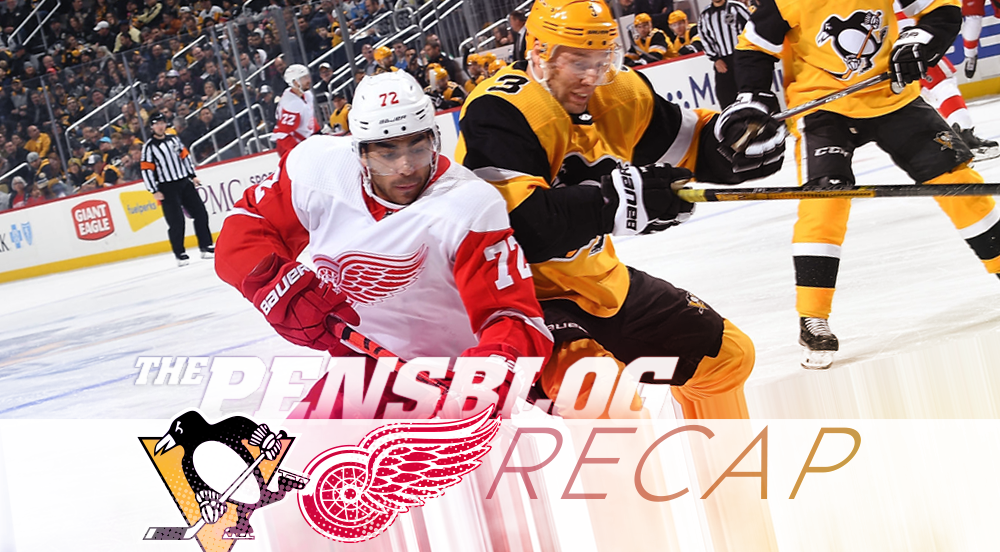 Recap 57: Relegation of the D

The Penguins kicked off Hockey Day in America yesterday with a noon game against the Detroit Redwings. In a day designed to spread awareness of hockey, the league could not have picked a better matchup to show the two extremes of hockey. Detroit serves as a good reminder for all those young people tuning in to hockey day in America of what can go wrong.  It was a David vs Goliath type matchup, but it took place in the real world.

Dominik Kahun has started practicing but is not yet cleared for contact so the Pens didn’t have any injury updates and thus started the same lineup as last game:

Murray gets the nod as Sullivan continues rotating the goalies every other game since the All-Star Break. Sullivan had to choose between Matt Murray ad Tristan Jarry, the Redwings had to pick Jimmy Howard over Jonathan Bernier.

A few extra sips of coffee and we were underway. The Redwings were pumped up to start this game while the Penguins looked like they would rather be in an unemployment line in Detroit. Having played the day before, the Wings had some jump to their step which they used to get some early looks on goal. Not even six minutes in the Pens had a defensive breakdown, Jack Johnson surprisingly got turned around in his own zone, the Wings made some slick passes and quickly went up 1-0.

Pretty give-and-go goal by Filppula with Bertuzzi to give the #RedWings the lead over the #LetsGoPens. #LGRW pic.twitter.com/WubHYPsSPT

People immediately jumped on Kris Letang for making a turnover as he attempted to clean up a puck from a dangerous area. Can we show why Kris Letang even had to do that in the first place?

Johnson is in okay position here, he is at least looking at the puck carrier.

In less than five feet, Johnson has been caught off guard by the forwards forward progression and he is starting to turn around.

A seemingly simple play has now turned in to an NHL defender defending a forward with a backward poke check at the blue line. That is some Detroit level shit. Some people were surprised about Kris Letang’s stats taking a hit in December. The reason is because Brian Dumoulin doesn’t make this play. Hell, Rob Scuderi doesn’t make this play.

The Redwings did complete a nice give and go to finish this play off. Not much Murray could do here and it was no surprise the Pens were losing early in an afternoon game.

Fortunately, the Penguins aren’t afraid of being down in games. Even more fortunate, with Alex Galchenyuk gone Mike Sullivan finally trusts the 4th line. He put them out for their 3rd shift in the first ten minutes and they got to work. It wasn’t pretty, but it doesn’t have to be. Sam Lafferty and Patric Hornqvist crashed the net, nobody is sure what happened but we know it went in.

The goal was originally awarded to Lafferty and then switched to Hornqvist only to be switched back to Lafferty after the game. It sure looks like Hornqvist touched it, but the fact it changed so quickly after the game makes me think Hornqvist told someone he didn’t touch it. Either way, great pass by Agozzino. Instead of carrying it behind the net he flipped it out short side and it paid off.

The goal woke up the Penguins a bit and they finally started getting some looks on goal, though Detroit was still getting a lot of chances. Finally, after seven minutes of 5v5 the 4th line would draw a penalty when Justin AppleGator interfered with Agozzino sending the Pens to the powerplay. The powerplay set up shop, moved the puck around, it came to Letang and it was time for that Bang Bang.

A LASER FROM KRIS LETANG!

With this tally, Letang ties his career-high of six power-play goals (set in 2013.14).@Letang_58 is second among NHL defenseman for the most power-play goals. pic.twitter.com/mpCEE83dLp

The powerplay is starting to heat up now that the personnel has remained consistent for a few games. Kris Letang continues scoring goals folks, now just 2 away from his career-high 16 which he hit last year. Picture perfect screen by Hornqvist and Rust here, really nothing Howard could do even if he was capable of doing something.

The remaining sixish minutes of the first would play out at 5v5, Detroit kept trying but Murray kept the team ahead. by the time the horn sounded Detroit had 16 scoring chances for at even strength compared to the Penguins 14, but it was the good guys with the 2-1 lead.

Despite having the lead you can bet Sullivan wasn’t too thrilled with the overall performance in the first period. Whatever was said in the lockerroom was heard loud and clear, as the Penguins stepped on the ice int he second they looked a lot more like the Penguins and made Detroit look a lot more like Detroit. Not even three minutes in the 4th line was getting busy. After what looked like an easy clear by the Wings, Hornqvist snuck in and made a nasty stick lift to gain possession. The Swede wasn’t done there, however. He turned on a dime and shot a puck the Jimmy Howard is still looking for.

Howard never saw this puck despite staring right at it. Here is a frame by frame breakdown of Howard not moving. I’ve circled the puck to make it easier to track.

The goal sparked the Penguins and they just turned up the heat. After 5 minutes of domination, the top line got down to work. After a nifty keep in by Zucker and Simon Crosby showed his patience and cycled around the perimeter. He handed the puck to Pettersson who sent it back to Sid. Crosby was waiting and just blasted one, and you know Sid knows that it doesn’t count unless you go bardown.

Sidney Crosby is dialed in folks. With the way he is playing and 25 games remaining, this SOB may hit 25 goals. This play was a product of the entire first line, Simon made the initial play to keep the puck in the zone and did a give and go with Zucker. All three members factored into the goa and you just hate to see the Penguins with a top line that is clicking.

Following the goal, the Penguins continued dominating. According to the stats the Redwings had 13 chances on goal in the period, but it felt like 1. Not everything was peaches for the Pens as Zach Aston-Reese left the game with an injury. The replacement dilemma wasn’t one Sullivan faced as he wisely slotted Hornqvist into ZARs position. Two minutes after the Crosby goal that decision paid off.

Branden Tanev is 6′ 0″ and 180 pounds while Madison Bowey is 6′ 2″ and 202 pounds and Tanev just plows through him like he’s cardboard Orpik. you wanna talk about determination? This is the grit right here. Also, great finish by Hornqvist. At the time of the goal, the first goal was credited to Hornqvist as well so the thought was this was a hattrick. it was not, but it still counted.

The Penguins would not score in the remaining 6 minutes, but it wouldn’t matter because the Redwings were completely disengaged. How does Jeff Blashill still have a job? My assumption is it’s because he wisely hired Dan Bylsma as his assistant, so a midseason coaching change wouldn’t be an improvement. At the end of the frame, it was 5-1 Pens after they put up 21 scoring chances for while only allowing 13 against.

It is believed that the Redwings requested to forfeit the third period but because it was Hockey Day in America the league didn’t allow it. The Penguins wanted to focus on playing defense with a third period lead without giving up a goal. This game served as perfect practice. Despite trailing the Redwings only managed 9 scoring chances for and 6 shots in the period. The Penguins masterfully dismantled every attempt the Redwings tried to set up. 15 minutes in the Pens would get their second powerplay but they couldn’t get their 6th goal of the game. Time would click down, and we were all looking like this

The Penguins dominating an opponent they should dominate in an afternoon game? Sign me up.