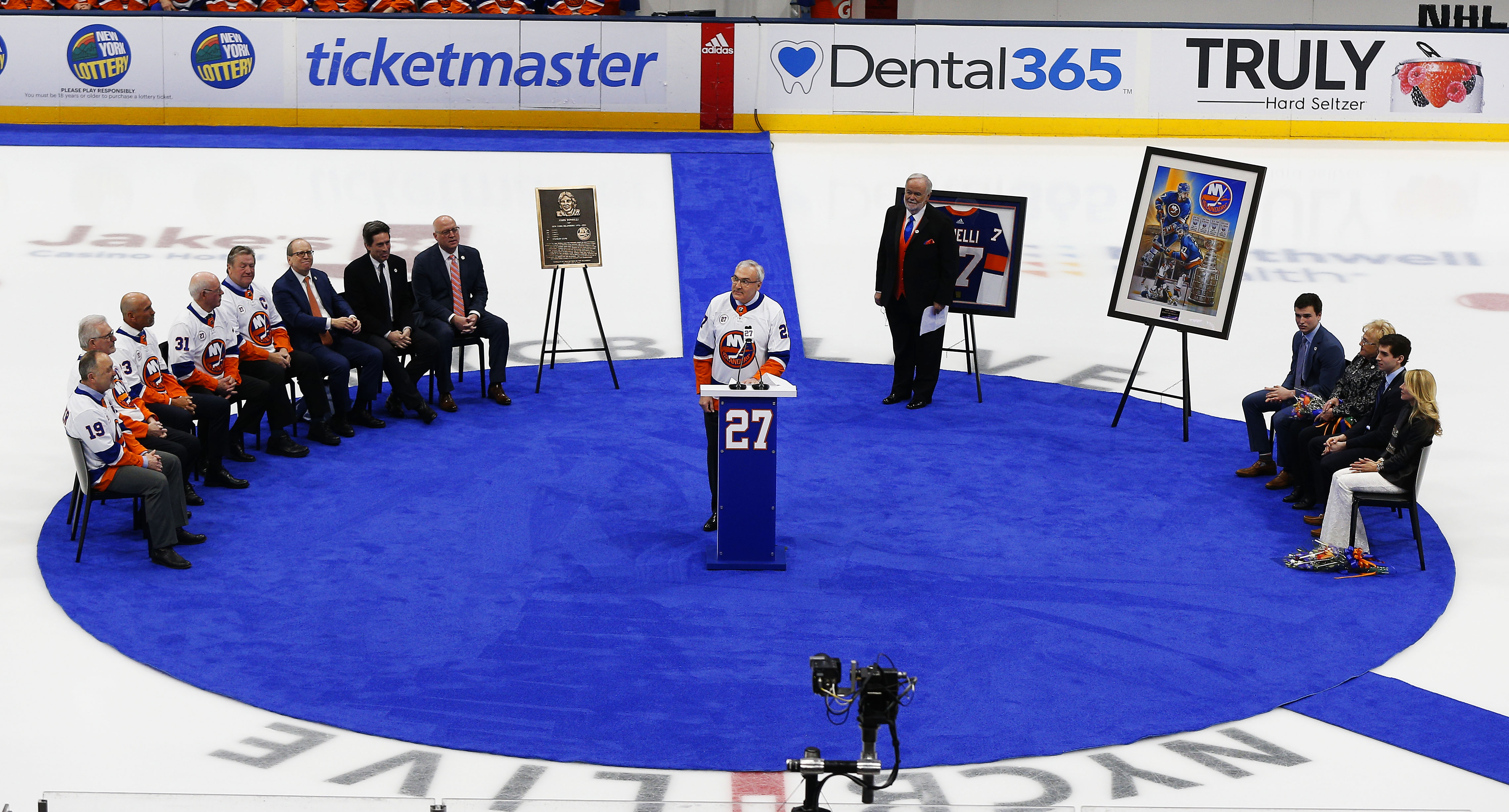 UNIONDALE, N.Y. — The words seemed so simple, yet poetically just as they exited the mouth of Hall of Fame broadcaster Jiggs McDonald at the end of John Tonelli’s banner raising ceremony.

“John Tonelli,  it’s time for you to take your place in the rafters as one of the greatest players to ever play for the New York Islanders,” McDonald exalted. Then, the dramatic music blared from the speakers as Tonelli’s famed No. 27 slowly made it to its rightful place at Nassau Coliseum.

It was the culmination of an honor that was a long time coming for the four-time Stanley Cup champion. Tonelli, in fact, was a key part of the Islanders dynasty era in the early 1980s and helped them win their first Stanley Cup in 1980, setting up Bobby Nystrom for the game-winning goal at 7:11 of overtime in Game 6 against the Philadelphia Flyers.

Tonelli thanking @91Butch during his speech. Butch will have his night very soon as well. #Isles pic.twitter.com/aCGm5hYiw7

So, as Tonelli stood there at center ice on Friday night, it only seemed right.

“Modesty aside,” Tonelli said during his speech. “I could say we were arguably one of the greatest teams in the NHL. … And to this day our enduring thrill is that we played and won for you, the NHL’s greatest fans.”

The comment was perhaps the least modest thing that Tonelli said during his roughly 17-minute speech before the Islanders defeated the Detroit Red Wings on Friday. The emotions easily visible the whole time as he thanked his teammates, the fans, his coaches, his family and friends.

At one point the Islanders legend had to pause for a moment and collect himself as the emotions of the moment began to overtake him. The fans filled the gap with a thunderous chant of “JT.”

Around him, he had Bobby Nystrom, Clark Gillies, Denis Potvin, Bryan Trottier and Billy Smith, all of whom occupy space in the Nassau Coliseum rafters. Mike Bossy was the only one not on hand, but sent a video message for Tonelli.

The moment that had been a long time coming for Tonelli #Isles pic.twitter.com/K0D3W1cJ5W

Islanders owners Scott Malkin and Jon Ledecky flanked Tonelli on the right along with his wife, two sons and mother. From the bench, the entire Islanders team, including the coaches, watched while wearing No. 27 jersey.

“To be standing here at Nassau Coliseum, where it all happened, it is especially fitting,” Tonelli said.

Of course, he always remembered for one play in particular. His pass to Nystrom that won the Islanders their first Stanley Cup, which remains his favorite memory as an Islander.

“We used to practice that play like religion every practice,” Tonelli told reporters early in the day about the play. “We always used to crisscross in the neutral zone. We did that over and over and over again. There are somethings that Al did that made practices longer than they should have been, but there was a reason. At that given time that situation happened.”

Though, after Friday, Tonelli may have a new favorite Islanders memory.

“Never in my wildest dreams. Never did I think this would happen,” Tonelli said. “but as I look back I said ‘all that hard work you put into it you’re being rewarded now. I’m being rewarded because of the great teammates I had and everything they did and the great architect, Bill Torrey.”