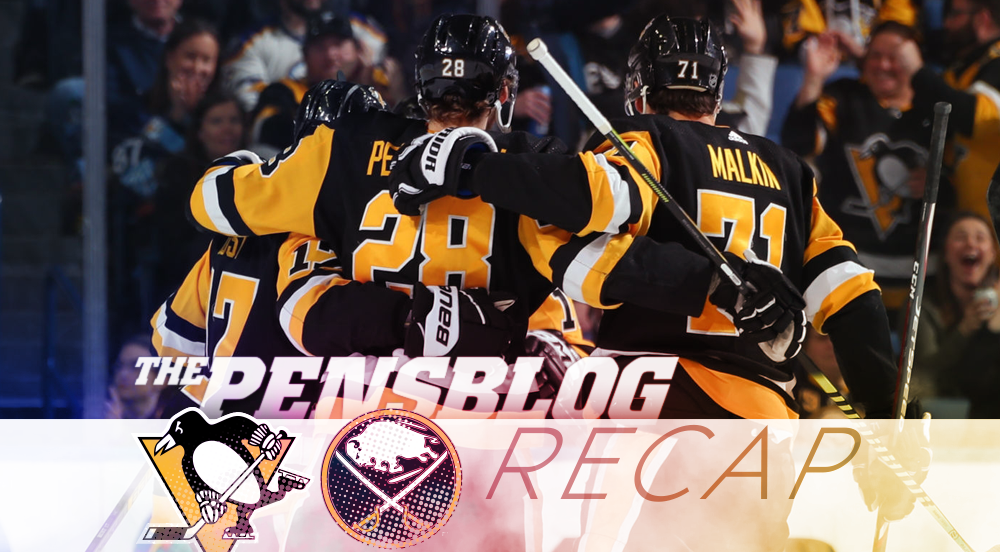 The Penguins were back on the road last night to face off against the Sabres in Buffalo. You may not have recognized the team because they actually had an NHL lineup through and through. Nick Bjugstad returned to action and folks,,, the Pens look like a hockey team.

Maybe it’s not the time to announce it, but this lineup shows the methodology behind the Kahun-Sheary trade. Without that trade, the Penguins are dressing someone with fewer than 100 NHL games in this one. Because of that trade, they have a full roster of NHL experience, no offense to Sam Lafferty.

Sticks down, pucks down and we were ready to go. It didn’t take long for Nick Bjugstad to make his presence felt has he barrelled in on goal and laid an elbow to the head of Buffalo netminder Jonas Brother Johansson. Bjugstad and Johansson collapsed, the puck was just chilling and the Patty Wagon added another one.

Patric Hornqvist has points in eight of his last nine games against the Sabres (6G-6A), which includes three multi-point efforts. His points-per-game average against Buffalo is his highest vs. any one team. pic.twitter.com/GZWwHXPMrd

The Sabres challenged the goal for goaltending interference, the refs went to the replay booth to flip their trusty quarter and it landed on heads so the goal stood. Due to the lost challenge, the Sabres took a delay of game penalty and the Penguins had a chance to go up 2 early but instead, it was the Sabres getting a shorty after Bryan Rust forced a pass at the blue line that resulted in a 80 foot Jacob McCabe breakaway. The Penguins didn’t score on the remainder of their powerplay but were able to shrug off the goal and from the goal and tilted the ice a good bit. After some solid pressure, the second line got to work circling the zone. Bryan Rust sent the puck to the point to the stick of Marcus Pettersson who took one look at goal, saw Marleau sitting in the crease and fired it in. The Swede didn’t need Marleau’s stinkin’ help though.

How Swede it is! @mpettersson16 gets his second of the season and the second Penguins goal of the night. pic.twitter.com/nDRCtboNQH

When the Penguins get on their working it low to high kick they are a much better team and this is a perfect example of that. Rust goes up top, Marleau slides in for the tip, Pettersson gets it in his direction. If you watch the gif closely you will see the two Buffalo defenders in the middle of the ice shift to your right, their left, when Rust passes it to Pettersson. This shift in positioning opens up the lane for Pettersson to use. Chefs kiss. The game settled down for a bit following the goal. Kris Letang took a slashing penalty at 18:29 to put the Pens on the kill for the rest of the period.

A look at the numbers after the 1st ⬇️ pic.twitter.com/WDkqlDVzKh

The Penguins finished the period with 16 shots and dominated the 5v5 play with 21 scoring chances for and just 12 against.

The Sabres wouldn’t cash in on the remaining 30 seconds of their powerplay and we went to a long stretch of 5v5. unlike the first period, the second period was the Buffalo Sabres Show with a guest appearance by Matt Murray. If anything, this period was a good reminder that there isn’t an easy night in the NHL. The Sabres were pouring it on, and we should pour one out for my good friend Jesse Marshall who made the costly mistake of pointing out that Jack Johnson makes poor decisions.

This kind of stuff will ruin you in the playoffs. Johnson gets the puck on his stick, in the middle of a line change, and turns it over. Worst possible area and worst possible moment for it. Then, he gets caught in the NZ and absolutely torched. Murray bails him out big time. pic.twitter.com/GCSz59jebO

Despite Jesse being right, the rest of his night, and probably most of today was spent replying to people criticizing him for not “picking” on other players (like Letang) as much. Rest in Peace Jesse. PS, Jesse does a great job breaking down plays during the game and is worth the Twitter follow if you aren’t following him already. After Murray turned in some of his best work the Sabres gave the Penguins some breathing room when Larsson crashed into Murray and drew a goaltending interference penalty at 12:31. The powerplay got to work, Patric Hornqvist went to the goal and Evgeni Malkin fought like a dog to get him the puck. The rest is status quo.

UPDATED: Patric Hornqvist has points in eight of his last nine games against the Sabres (*7G*-6A), which includes *four* multi-point efforts. His points-per-game average against Buffalo is his highest vs. any one team. pic.twitter.com/VPoQwDZqbR

Hornqvist is closing in on his 9th 20 goal season as he remains Mr. Consistency. This was also Malkins 69th point of the season, you know what to do. Two minutes after the goal the Penguins were given another opportunity with Lawrence Pilut, potentially a lawyer, slashed Patrick Marleau. The Penguins powerplay was on the ice for 33 seconds before Malkin was sent off for what looked like a back and forth but the refs decided there was only one at fault. Following the 4v4 the Sabres had 30 seconds of powerplay time that the Pens killed off. By this time, there were just 3 minutes remaining in the period and those played out scoreless. By the time the buzzer sounded the Penguins had generated just 3 even strength scoring chances compared to the Sabres 13. Matt Murray was the only reason the Pens carried a lead into the intermission.

The numbers through 40 minutes of play ⬇️ pic.twitter.com/8OiKiHkZau

As the third period started the focus was on the Penguins ability to erase the second period and get back to their game. Unfortunately, their efforts were stalled when the Schultz-Johnson pairing got beat less than two minutes in. The Sabres PR team didn’t bother putting up a highlight of the goal so I will paint you a picture. Imagine Jack Johnson is the Incredible Hulk, but instead of only saying “Hulk SMASH” he says “Johnson HIT” and that pretty much helps you understand what goes through his head every play.

Fortunately for Murray, the team responded by putting their foot back on the gas pedal. Five minutes later it was Sidney Crosby driving down the wing. We’ve seen it a million times, but it never gets old. Puck is on his backhand. He has Sheary to the left. He’s going to pass. Nah, he’s going to rifle a backhander in shortside because he is Sidney Fucking Crosby.

This will never get old, and I don’t have the words to describe how difficult this shot is to pull off.

The Crosby backhand gets the best of us.

Teddy Blueger would take a high sticking penalty a minute after the Crosby goal to give the Sabres one last chance but the penalty killers weren’t having it. The rest of the period played out with the Penguins hitting a couple posts and time would click away on another win.