The Pittsburgh Penguins enter their Tuesday night matchup against the New Jersey Devils having won just two of their past 10 games; a 7-3 victory over the Ottawa Senators at home and a 4-2 victory over the Buffalo Sabres on the road.

After a weekend that saw the Penguins lose on back-to-back days at home to Metropolitan division rivals by a combined score of 11-4, there are some legitimate concerns about the team.

Despite general manager Jim Rutherford telling The Athletic’s Josh Yohe that the Penguins are “just fine,” consider the following:

No matter how much Rutherford believes that Sidney Crosby can go out and single-handedly win games for them, it is going to be a disaster for the Penguins if that’s what they have to rely on. There’s way too many good teams in the Eastern conference this season for Crosby to be able to overcome a third pairing of Johnson-Schultz and a bottom six that can’t find the back of the net.

Let’s take a look at each aspect of the Penguins’ game and see where they stand.

We can see that both goaltenders have struggled as of late, especially Murray. There have only been two stretches this season where Murray exceeded expectations, whereas Jarry has exceeded them for a majority of the campaign.

I get the sense that the Penguins want to get Murray rocking and rolling so he can be their guy come game one of the playoffs. Murray has proven he can lead a team to a Stanley Cup. Whether they’re right for it or not, they seem as though they’re more comfortable with him in net.

Something important to keep in mind is that both Murray and Jarry are restricted free agents at the end of this season. If the Penguins go on to win the Stanley Cup with Murray in goal, he is going to command a contract that the Penguins will be sure to regret and it probably won’t take long for that to happen.

However, if the Penguins win the Cup with Jarry in goal, the Penguins might end up trading Murray’s rights and then signing Jarry to a cheaper deal than they would have given to a 3X-Cup champion goaltender in Murray.

Considering the volatility we see in goaltender performance in today’s NHL, it would behoove the Penguins to ride whichever goalie is performing better at that point in time rather than hoping they can rekindle some old magic from Murray that may or may not be there.

Either way, both netminders need to be better down the stretch or it won’t matter how the team in front of them performs.

There was a stretch from early November through early December where the Penguins were the best defensive team in the league at 5v5. After that, the Penguins still hung out around league average or slightly below in terms of expected goals against until February, which was an utter disaster. The following chart represents the Penguins’ ability to limit quality chances against over the course of the season.

The Penguins are trending in the right direction defensively as their five-game rolling average expected goals against is once again below league average.

The returns of defensemen Brian Dumoulin and John Marino have undoubtedly made significant impacts.

Take a look at the following charts that show their impacts on the Penguins’ transition game. Focus on the bottom row of graphs. This is how they stack up when exiting the defensive zone, something the Penguins struggled with mightily while they were out. (Click to enlarge) 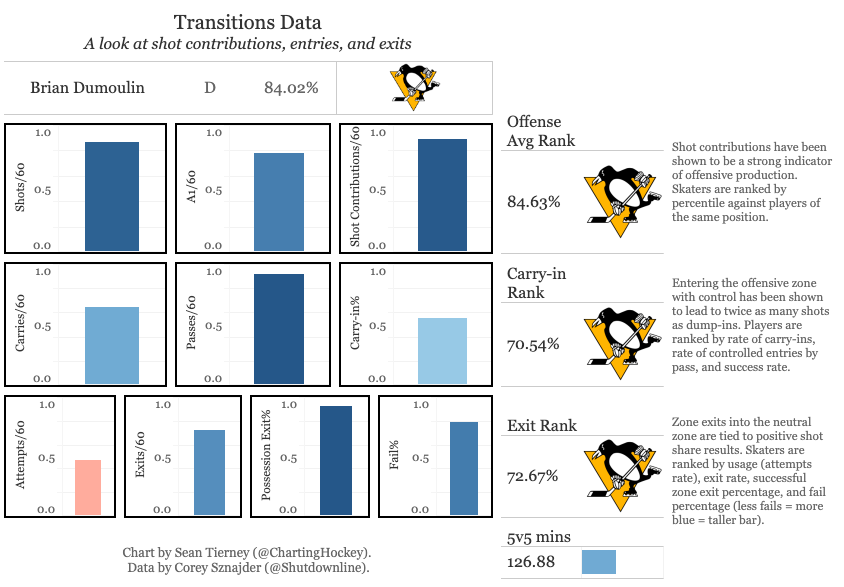 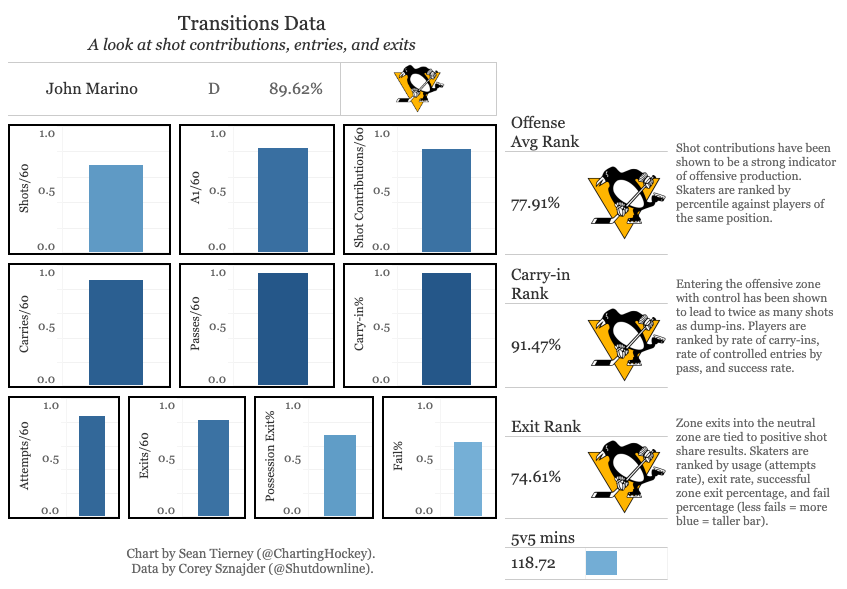 The Penguins have had flashes of offensive excellence at 5v5 this season, but for the most part they have been toward the bottom of the league when it comes to creating quality chances. The chart below shows their five-game rolling average of expected goals per game at 5v5.

Over their past five games the Penguins are expected to score just 1.54 goals per game at 5v5, the lowest total in the NHL.

Although they have dipped below league-average, the Penguins are still shooting 6.9% at 5v5. I’d say that’s right around where they should be considering their lack of an offensive pulse recently.

If you’re looking for a bright spot about the Penguins on offense, I’ve got nothing for you. The following chart shows team shot rates at 5v5 over the past 25 games.

The only teams shooting less than the Penguins over the past 25 games are the Devils, Sabres and Detroit Red Wings.

The Penguins are creating 7.11 expected goals per hour on the powerplay this season and have outperformed that with 7.37 actual goals per hour. However, that rate ranks them 16th in the NHL.

All season long I have been critical of the Penguins’ powerplay and the way it has been structured. Personnel issues aside, there’s absolutely no reason why the powerplay shouldn’t be centered around loading Malkin up for one-timers on the right circle. They have looked extremely dysfunctional as of late. Letting Malkin rip bomb after bomb a-la-Ovechkin would bode well for the Penguins, but assistant coach Mark Recchi, who designs the powerplay, seems insistent on doing everything but that.

The Penguins have a heavy dose of Metropolitan division opponents during the month of March. While it seems unlikely now, the Penguins could find themselves out of the playoff picture come April if they don’t shore up some of their current issues.

On an individual level, I’m not sure that any of the forwards have been “bad.” The thing I’ve noticed the most is that there is no puck support whatsoever. Maybe that has to do with trade deadline acquisitions getting acclimated at the same time as a couple of key defensemen returning from injury. Whatever the case may be, the Penguins are running out of time to figure it out.

If the Penguins go another couple of weeks with poor goaltending and league-worst offensive generation at 5v5, they are going to be in a battle for a playoff spot until the very last game of the season.