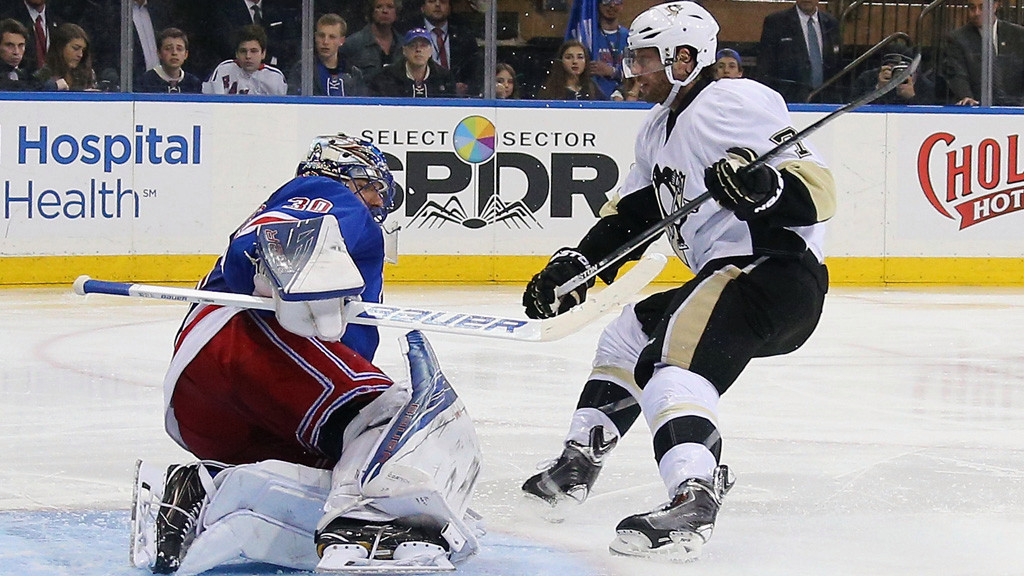 There may not be any better way to start your Stanley Cup Playoff career that outdueling your hero on his home ice in one of the most iconic arenas on Earth.

That’s exactly what Matt Murray did.

A tough SOG given up by Murr but when Nash has full-steam, he’s still an elite goal-scorer despite getting up there in age.

Sixteen saves may not seem like a world-beating number but when your team holds the opponent to just 17? You did your job.

The advantage has now shifted completely to the Penguins. Up 2-1 and a chance to push the Rangers to the brink, on the Rangers ice, then head home and close it out and get some rest.

Not to mention, the Caps are on the verge of sweeping the Flyers and all the rest these Pens can get if that’s how this works? The better. Not counting chickens but we all know how good this Caps team is. If a meeting with them in the second round is on the docket, you better come loaded for bear.

Escaping Broadway with one was the goal. Escaping with two is ideal.

Nothing to it but to do it for Matt Murray. He starts, Fleury’s still on the shelf, Zatkoff backs up.

Other than Murray, same as game two.

McIlrath comes out, McDonagh comes in. Could be a boost for the Rangers getting him back. We’ll see.

The first few minutes of the period were exactly the kind of start the Penguins would want on the road with a rookie goalie starting at the other end.

They owned the puck, fired several shots on net and we saw these rookies we come to love, shine.

None better than Conor Sheary making Derek Stepan look like a traffic cone.

Cole would force a streaking Eric Staal to the corner, as you’re supposed to do as a defenseman. However, once Staal slams on the brakes, Cole catches an edge, opening up Staal to find Jesper Fast sneaking in through the slot. He feeds him, he has an open look but Murr shuts the door.

Good awareness by Geno to swing to the corner and start a breakout rather than clear the rebound blindly out of harm’s way.

You know how every insufferable NHL fan wants to tell you that offense isn’t necessary for a hockey game to be entertaining?

This was their wet dream.

The pace to the period was fast and the goalies and team defense were good.

A Penguins power play would get cut short after Conor Sheary would get his stick up into the face of Dominic Moore. He’d sit for four minutes, the Pens would kill that off.

The Rangers thought they scored but were offside by about a country mile. Mike Sullivan, Rick Tocchet, and Andy Saucier saw this and challenged immediately.

You could tell it was clearly offsides because not even the crowd faked the incredulous “no way!!!” reaction.

Getting out of the first period in which you took a four-minute double minor and had a successful offside challenge in a 0-0 tie is pretty okay, especially on the road.

Right out of the gate, the Pens would go back on the power play as a Kreider would crush Hornqvist from behind and head off for boarding.

It wouldn’t go the way the Pens wanted…

Geno would attempt to stop a Marc Staal clearing attempt and he did but was unable to control the puck. That bounced off of Crosby’s stick right to Klein.

Nash read the play correctly and took off behind Malkin, Klein worked it to Nash, Letang came close to closing the gap but Nash got a clean look at Murray and went far side, post and in.

Shortly after, Daley would be called for roughing. Worthwhile penalty. Zuccarello crashing hard on Murray’s net, gotta protect your goalie.

Pens would kill it.

The bad news: In the Stanley Cup Playoffs a single mistake is magnified. You blink in the staring contest and it could be the difference between a lead in the series or a deficit.

The good news: The Penguins carried play aside from two penalties in the middle frame.

Their resiliency paid off with under a minute left.

With Marc Staal in the box, a methodical Penguins power play went to work.

High to low, get the Rangers PK out of sorts and moving, work the puck to a free man and finish the play.

Unreal awareness by Kessel to see Sid at the side of the net and slide the pass through. Phil has one of the nastiest snapshots of all-time but do not sleep on this man’s playmaking ability. Letang, Malkin, and Crosby don’t run this power play. Phil Kessel does off the half-wall. Everything goes through him.

Win the period, win the game. Pretty simple.
Pens made a change to start the third – Sheary was promoted to Sid’s line, Kunitz down with Malkin.

Remember this offseason when the Pens signed Matt Cullen and you basically shrugged or thought, “do we really need this old guy?” Bet you didn’t think he’d score a pretty consequential goal against his former team in game three.

Similar to baseball when two outfielders don’t communicate who is going to catch a foul ball, Boyle and Yandle have a miscommunication on a loose puck and Cullen pokes it past both.

Comes in on Lundqvist and with an ever-so-slight opening of the face of his blade gets Lundqvist to bite on a possible deke and then slides it five-hole.

It would’ve been easy enough for the Penguins to hold the lead, keep the Rangers at bay and escape with the win.

The Penguins did not do that. They kept the foot on the gas and kept taking the play to the Rangers.

When the Rangers would get time in the Pens’ zone, it would never last long.

The Rangers would add two shots in the final ten minutes of the game which ended with Lundqvist being pulled with 1:30 to go.

Letang would ice this one away, hitting the empty net from center.

Win game four and this series is all but over.