Nearly four months later than expected, the Stanley Cup playoffs are set to begin Saturday with a qualifying round for teams 5-12 from each conference while teams 1-4 will play a round-robin to determine seeding (as if it will matter).

The five-seed Pittsburgh Penguins will be playing a best-of-five series against the Montreal Canadiens, who had the lowest point total of all 24-teams playing in the tournament.

Obviously both teams will be looking to advance in hopes of a Cup, but it’s important to keep in mind that whichever team loses the series will have a 12.5% chance at the first overall pick in this year’s draft, which is tentatively scheduled for October 9-10.

On paper, the Penguins measure up well against the Canadiens. According to Dom Luszczyszyn of The Athletic, the Penguins have the best forward group of any team in the tournament that isn’t the Tampa Bay Lightning.

They boast two of the best players of the post-lockout era in Sidney Crosby and Evgeni Malkin, one of the league’s best wingers in Jake Guentzel, and winger Bryan Rust, who’s coming off a point-per-game season in which he led the Penguins in goals. And then they have two strong wingers, Jason Zucker and Conor Sheary, to round out the top two lines.

They also have one of the best fourth-lines in hockey in Brandon Tanev, Teddy Blueger and Zach Aston-Reese. No line in hockey was better at limiting the offensive generation of their opponents than these three this past season.

Although the Canadiens’ forward depth is nowhere near as talented, their top line of Tomas Tatar, Phillip Danault and Brendan Gallagher was one of the league’s best. With them on the ice at 5v5, the Habs scored 58% of the goals and had an expected goal share of 60%.

The Canadiens have a couple of decent players down their lineup; mainly Max Domi and Nick Suzuki, but there’s nothing that leads me to believe the rest of their forwards have the ability to push them over the edge, or even come close to matching up with the Penguins’ forward group.

On the blueline, the Penguins have two strong pairings bolstered by Kris Letang and rookie John Marino, who was sensational in his own end this season. Their third pairing is susceptible to disaster. That pairing is none-other than the Jack Johnson – Justin Schultz duo that has seen the Penguins hemorrhage high quality shots against while simultaneously stymieing their own offense.

The Canadiens also employ two solid right-handed defensemen in Shea Weber and Jeff Petry. The rest of their blueline isn’t made up of household names, but it certainly isn’t nearly as awful as some Pens fans are making it out to be. Ben Chiarot, Victor Mete and Brett Kulak are all solid options on the backend even if they don’t tip the scale in favor of the Habs. Christian Folin, however, is a replacement-level player.

In goal, the Canadiens are sure to roll with Carey Price. Nobody knows for sure what to expect from this tournament after such a long layoff, but I can declare with full-certainty that Price will not be performing at the MVP-level he did in 2015.

The Penguins have a choice to make between the guy who won them back-to-back Cups and the guy who vastly outplayed him this season. Matt Murray has been one of the most inconsistent goalies in the league since hoisting his second Stanley Cup and is coming off the worst regular season of his career. At one point during the season, Tristan Jarry had all but taken the starting job from Murray and was chosen to play in the NHL All-Star game. As the season faded, so did his performance. By the end of the season in March, both goaltenders were allowing goals at a significantly higher rate than expected.

It appears as though Murray will get the game one nod despite all reports out of camp claiming Jarry has been much sharper. I expect Murray’s leash to be extremely short if he falters.

Now that we’re familiar with the personnel, let’s take a look at how each team fared at 5v5 this season with some help from a beautiful viz from @JFreshHockey (subscribe to his Patreon for more awesome visualizations like this one).

The Canadiens were one of the top teams in the league this season at controlling play as they ranked second in shot attempt share and third in expected goals share. However, they struggled to convert their chances into goals as they ranked just thirteenth in 5v5 goals share. More on this in a second.

The Penguins weren’t quite as strong at driving play, but still finished inside the league’s top ten in expected goals share and actual goals share. There is legitimate reason to believe the Penguins would rank quite a bit higher in play-driving metrics if they hadn’t strapped Jack Johnson to the top d-pairing for a month and a half toward the season’s conclusion.

No team shot the puck more than the Habs this season. Their 64 shot attempts per hour at 5v5 is nearly 10 more than the Penguins. They also created quality offense at a rate that landed them third in expected goals for per hour (2.66), but that only translated to 2.54 actual goals per hour.

Despite a discrepancy in xG models from HockeyViz and Evolving-Hockey, we can see the Canadiens shoot a ton of pucks from the perimeter to try and wreak havoc in front of the net, the most dangerous area of the ice: 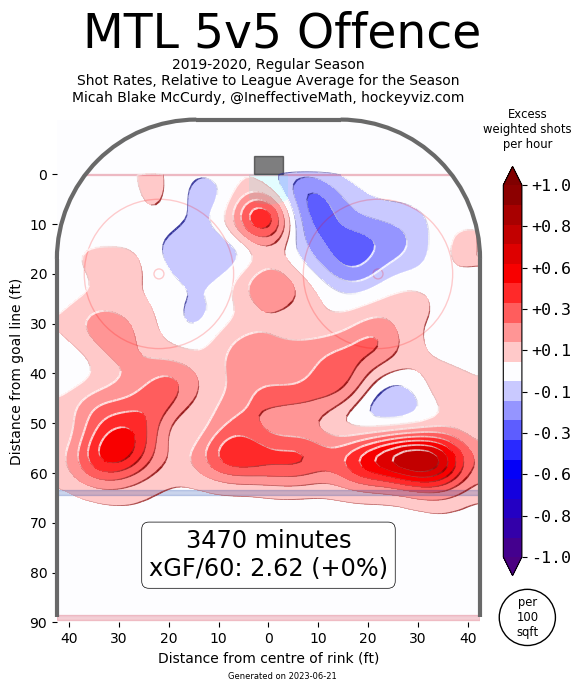 If the Canadiens are generating shots from the most dangerous areas of the ice more than anyone else, why aren’t they converting on more of those chances?

Look no further than the finishing talent of the Canadiens’ forwards. Don’t confuse this with having a good shot. For example, Jared McCann has a good shot, but he’s just an okay finisher. 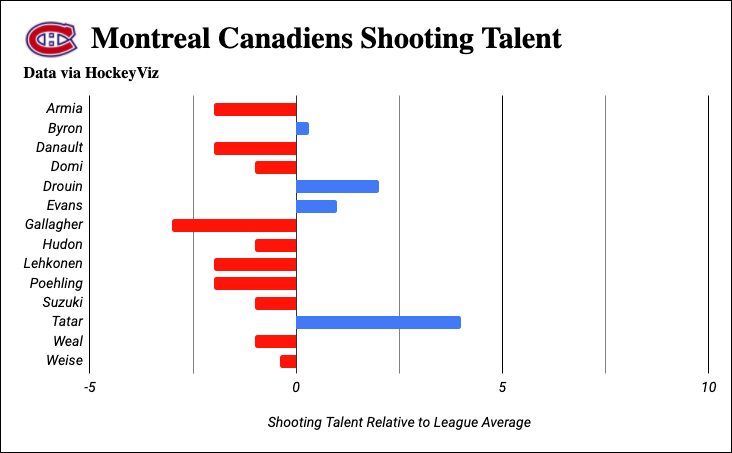 Only four of the Habs’ forwards are above-average finishers, highlighted by Tatar. Although Gallagher is a poor finisher, he generates goals at an elite rate due to the volume of shots he takes. He scored 1.38 goals for every hour he spent on the ice at 5v5, 11th best in the NHL.

The Penguins created just 2.35 expected goals per hour at 5v5, but scored at a rate of 2.71 goals per hour, in large thanks to a group of talented finishers. 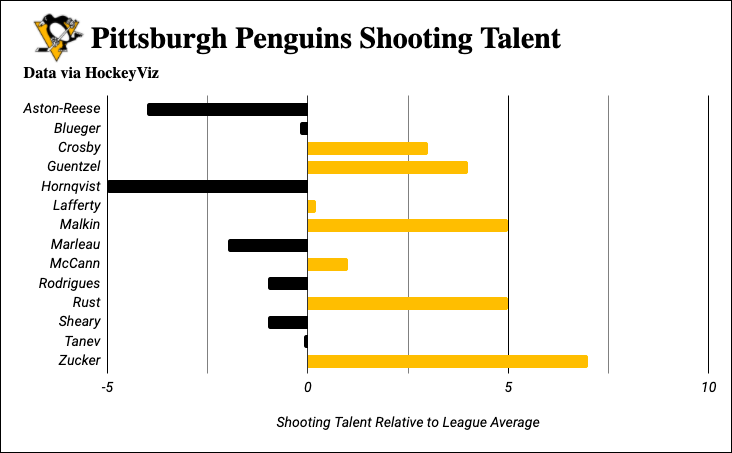 The only member of the Penguins’ top-six who isn’t a strong finisher is Sheary, though I suspect he’ll be just fine playing alongside Crosby and Guentzel.

Patric Hornqvist and Aston-Reese are the Penguins’ most notable poor finishers, but there is more than enough finishing talent at the top of the lineup to make up for it.

Moving on to special teams.

The Penguins struggled throughout the season to have a cohesive powerplay. They only scored 6.5 goals for every hour they spent at 5v4, 16th in the NHL. After their lone exhibition game against the Philadelphia Flyers, it appears that won’t be any different heading into the postseason.

They lack a powerful right-handed shot for one-timers with the man-advantage and it has led to a bunch of horribly designed powerplays. I know they love Hornqvist as a net-front guy, but I think it would behoove them to swap Rust out for him on PP1 and move Guentzel to the net-front. Any setup they go with that doesn’t have Malkin on the right half-wall and Crosby down low is wasting an opportunity.

Montreal does one thing when they get set up on the powerplay: feed Weber one-timers. 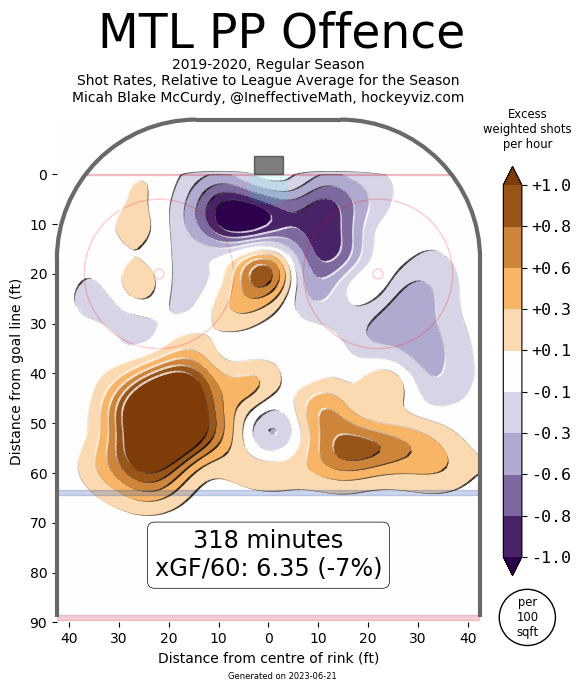 That giant orange blob is where they let Weber hammer one-timer after one-timer to no avail. This is also a recipe for a mediocre powerplay, no matter how booming Weber’s shot is. The Habs ranked 26th in the NHL in 5v4 goals per hour with 5.5.

It’s at least somewhat understandable that this is their approach considering they don’t have any high-end talent to rely on with the man-advantage. With that being said, their strategy clearly doesn’t work.

There’s a stark contrast between the effectiveness of the Penguins’ penalty kill and the Canadiens’ penalty kill. The Penguins were expected to give up just under six goals for every hour they spent at 4v5, 6th in the NHL, versus over seven goals for the Habs (26th).

The Penguins’ kill does a great job of defending the front of the net and forcing the opposition’s powerplay to settle for low-danger shot attempts. I think we can expect plenty of Weber clappers. 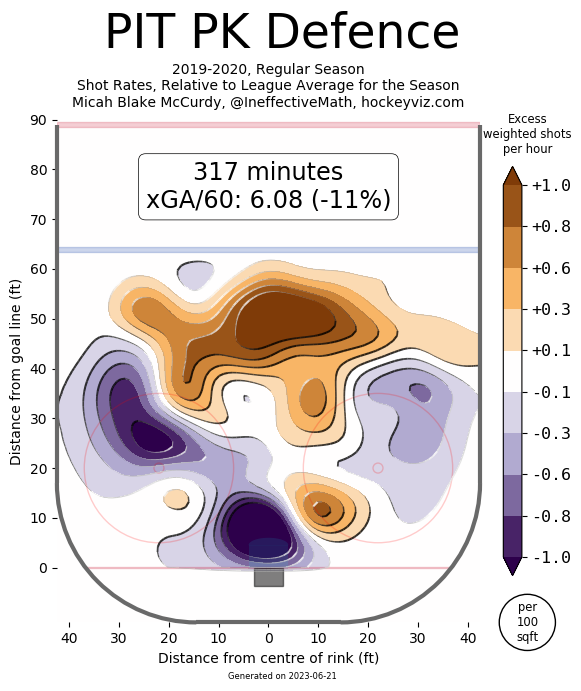 Interestingly, the Canadiens’ kill tends to give up a lot of shots in the same areas that the Penguins’ powerplay generates a lot of shots. This will be something to keep an eye on. 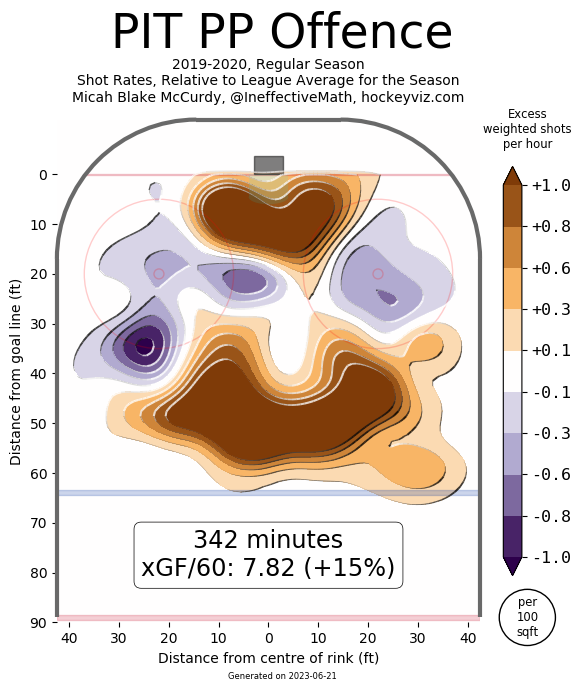 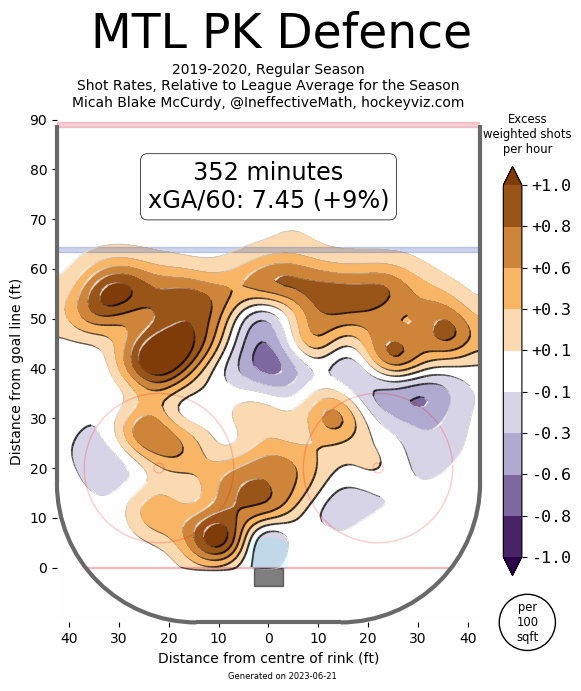 It’s impossible for me, or anyone else for that matter, to definitively tell you who will win a 5-game series after a four-month layoff from the world’s most random sport. Anything can happen, and I suspect we’re in for a bizarre tournament.

With that being said, I believe the Penguins have a decisive edge over the Canadiens and I like their chances of advancing.

The Habs will shoot the puck from all over looking to deflect pucks and bang home some loose change, but their lack of finishing talent, as well as poor special teams makes this Pittsburgh’s series to lose.

Our very own Geoff (@G_Off817) wrote a three-part series breaking down the Penguins’ forwards, d-men and goalies. Check them out:

All data via Evolving-Hockey.com, HockeyViz.com

Remember when we had five aces? Well I think today was the day that the era of the Mets rotation ended. Thank goodness that Jacob deGrom (…)

This episode of Monday Night Raw came back to the Performance Center in Orlando Florida. It was built to continue the buildup for (…)

Sport brings people together from across the world. It can be celebrated by everyone, played by anyone, and overcomes many barriers (…)

The NBA’s reigning MVP Award winner thinks very highly of the player who’s challenging him in his quest to repeat this season. Giannis (…)

UND in the Stanley Cup Playoffs

After one round of play, the Stanley Cup playoffs move on to the quarter-finals. First things first, the Toronto Maples continue their (…)

The ping-pong balls did not go in the Edmonton Oilers’ favor on Monday night. Instead, the New York Rangers won the first overall pick in the (…)

The New York Mets (7-9) have won two in a row but suffered a loss off the field today. Marcus Stroman opted out of the season, dealing a (…)