Your Morning Dump… Where Celtics-Raptors Game 1 is now set for Sunday, 1 p.m. 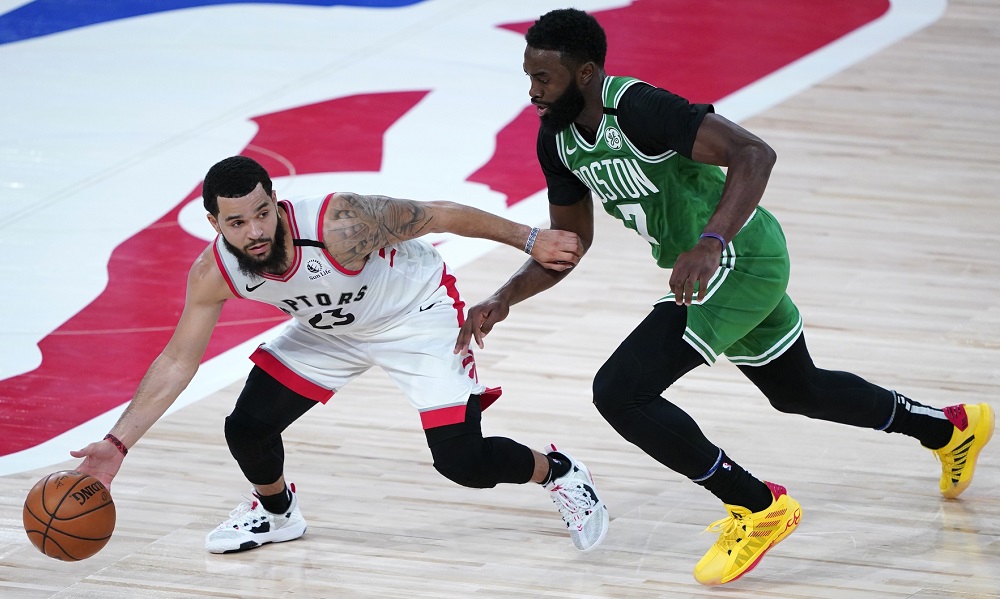 Your Morning Dump… Where Celtics-Raptors Game 1 is now set for Sunday, 1 p.m.

The Boston Celtics and Toronto Raptors will begin their Eastern Conference Semifinal series on Sunday afternoon at 1 PM. The game will be televised on ESPN.

The rest of the series schedule has not been announced, but it’s possible they’ll follow the same every-other-day schedule every other series has been.

The series was supposed to begin on Thursday, but the games were delayed due to player protests over the police shooting of Jacob Blake in Wisconsin. The protests began Wednesday, when the Milwaukee Bucks refused to take the floor, and they continued through Friday.

The Celtics and Raptors both swept their first-round series, so this is shaping up as a must-see confrontation. The Raptors have been in the NBA for 25 seasons, and this is the first time they’ve met the Celtics in the playoffs.

Both squads were heavily involved in initiating the strike that postponed two days of playoff games. From a basketball viewpoint, the group that re-focuses most quickly on the game itself should enjoy an advantage in Game 1, and perhaps the entire series.

On Page 2: They came to an agreement

The NBA and the NBPA released a joint statement Friday detailing when the 2020 playoffs will resume and the actions both sides are taking to promote social justice and voting.

Here are the three initiatives from the official statement that the league and its players are committed to putting in place.

1. The NBA and its players have agreed to immediately establish a social justice coalition, with representatives from players, coaches and governors, that will be focused on a broad range of issues, including increasing access to voting, promoting civic engagement, and advocating for meaningful police and criminal justice reform.

2. In every city where the league franchise owns and controls the arena property, team governors will continue to work with local elections officials to convert the facility into a voting location for the 2020 general election to allow for a safe in-person voting option for communities vulnerable to COVID. If a deadline has passed, team governors will work with local elections officials to find another election-related use for the facility, including but not limited to voter registration and ballot receiving boards.

3. The league will work with the players and our network partners to create and include advertising spots in each NBA playoff game dedicated to promoting greater civic engagement in national and local elections and raising awareness around voter access and opportunity.

The Boston Celtics do not control their arena, so their involvement in the second point remains to be seen. The TD Garden is owned by Delaware North, the owners of the Boston Bruins.

Coming into the Disney World bubble, some NBA players were torn: should they return to their teams, take a chance on overcoming COVID-19, and try to salvage the season? Or should they stay home to continue their campaign for social justice?

As we know, a few had reasons to remain at home, but those who entered the bubble were committed to making it work. And it was working – until there was another police shooting of a Black man, this time in Kenosha, Wisconsin. The players’ focus immediately switched from hoops to humanity, because after George Floyd, after Breonna Taylor, after Sandra Bland and Philando Castille and Tamir Rice and countless others, they were fed up.

Their brief strike got results. They’ll no doubt strive to continue their activism when they return home from the bubble, but this agreement with the NBA is a good start.

Now, if you’re reading this, that probably means you haven’t given up on the league. You haven’t thrown your hands in the air and shouted “I’m never watching them again!” You’re realistic enough to recognize that politics seeps into everything, including sports. There’s no avoiding it.

But for anyone who needs more insight into why the NBA season almost came screeching to a final halt, here are the two best tweets I’ve seen on the subject, one from a Van Gundy and another from a football player. They explain how this hasn’t just been about Jacob Blake.

It would be wrong to think that today’s NBA, WNBA and MLB boycotts were about one shooting in one city. This is frustration and anger that after 400 years of racial oppression there has not been nearly enough change. How much longer will we tolerate this racial oppression?

If you’re still wondering what all the fuss is about… If you don’t understand why everyone is so mad…. if you constantly find yourself defending and justifying all the horrendous acts… if you are against the protest AT ALL…. look no further… YOU are the problem!!!

Globe: After reflection, NBA players believe they can turn ideas to end social injustice into demands if they play on

Boston.com: Do you agree with how athletes, sports leagues reacted to the police shooting of Jacob Blake?

The Athletic: Thompson: They may be game, but burden of change shouldn’t be all on athletes

And, finally… Activist and champion

In his years of playing and coaching, Bill Russell was never one to “shut up and dribble.” He still isn’t. His Twitter profile lists “civil rights activist” before “11x NBA Champ.”

Naturally, Russ had some thoughts about the events of the past week, which he shared in tweets below.

I was honored to attend the #MarchOnWashington along side organizers & civil rights leaders. Today the March is often reduced to Dr. King’s speech but we should also remember it as proof of the power of collective action. The march to true equality is ongoing. #Register & #Vote https://t.co/E5CvsZDJW8

65 years ago today #EmmettTill was Lynched after falsely being accused of flirting with a white woman. Recently Congress tried to pass the Emmett Till Anti-Lynching Act but @RandPaul voted NO. We need change #BlackLivesMatter pic.twitter.com/ORO28jahWi

In 61 I walked out if an exhibition game much like the @nba players did yesterday. I am one of the few people that knows what it felt like to make such an important decision. I am so proud of these young guys. It reminded me of this Pls RT ⁦@MSNBC⁩ ⁦⁦@CNN⁩ ⁦⁦ pic.twitter.com/70VAIFxhtf

I’m moved by all the @NBA players for standing up for what is right. To my man @TheJetOnTNT I would like to say Thank you for what you did to show your support for the players. I am so proud of you. Keep getting in good trouble. @NBAonTNT @ESPNNBA @espn #NBAPlayoffs ✊🏿

Thank you @DocRivers for your words of wisdom and keeping this at the forefront. Proud to see the men in the bubble using their voices to try to enact real change! @NBAonTNT thank you for talking from your heart and trying to educate others by giving your experiences @NBA