Who:  The Baltimore Ravens vs the Indianapolis Colts

When:  1:00 PM Eastern, Sunday, November 8th. TV: CBS. This is a big game, so CBS gives us a good crew with Ian Eagle and Charles Davis. Pittsburgh – Dallas get the Nantz/Romo treatment, which is 100% because it’s a late game. Alright, we all know the NFC East sucks. Dallas has 2 wins, and they’re doomed without Dakota Prescott, but guess what? Including the Pittsburgh game, they’re slated for a national TV appearance SIX times the rest of the season. This is BS. The NFL truly doesn’t understand the fans.

This is the toughest test for the Colts to date. Baltimore is reeling a bit following a tough loss against Pittsburgh, , but they’re very good, and Jackson’s a problem for anyone to defend against. This isn’t going to be easy.

You know what though? Screw Baltimore. For years we heard all this crying about the Colts leaving. You know what? If I could look myself in the eye and truly say I supported the 7-9 1983 Colts as much as I did the 13-1 1968 Colts, I’d probably have a reason to still be a bit upset. If I’m one of those who only say “Unitas” “Berry” “Moore” when I talk about the Colts leaving? I need to STFU, remember all of them were gone 10+ years before the Colts moved, *and* remind myself what Art Modell did to bring me another team was a hell of a lot worse than anything Robert Irsay did.

“BuT wE dIdN’t TaKe ThE bRoWnS hIsToRy WiTh Us”. Yeah, because the NFL told Art Modell no freaking way. I love the history of the NFL so much. In fact, I was so excited writing this article for the Cleveland game that I got all carried away and wrote an extra 600 words about how the addition to the NFL of Paul Brown and his team jumpstarted the NFL towards what we see today, then I remembered no one else cared.

That’s how I feel looking at all-time stats for the Colts and seeing Unitas and Berry in there with Manning and Harrison. I LOVE the history – if you can get your hands on the 1958 NFL Championship Game, do it – but the Baltimore Colts history belongs in its own special place.

Philip Rivers stakes the Colts to an early lead on a 30 yard strike to Marcus Johnson, but the Baltimore defense stiffens and the Colts don’t score again in the first half. The half ends with the Ravens up 10-7, thanks to a 61 yard pick 6 by Marlon Humphrey and a 36 yard FG by Justin Tucker.

It’s going to be a more exciting second half, though.

The Colts strike first on an 8 yard pass from Rivers to Trey Burton, but the good vibes don’t last long, because Devin Duvernay returns the ensuing kickoff 87 yards. Rivers isn’t daunted, however, and punctuates the scoring drive with another TD pass to Burton, this one for 10 yards, and the quarter ends with the Colts up 21-17.

Baltimore sandwiches two TD runs by Lamar Jackson around a 1 yard run by Jonathan Taylor to lead 28-24 with just 2:55 left. Jackson’s second TD is a thing of beauty, as he shakes Phillip Walker out of his cleats.

Knowing Frank Reich’s penchant for running on 2nd and 10, the Ravens move their safeties up, but…it’s a pass! Rivers lofts one down the right sideline to Burton on a deep post route. Burton initially turns the wrong way, but adjusts and makes a spectacular over the shoulder grab for a 42 yard gain to the 14. Nothing’s ever easy, though, and the Colts have to call on Blankenship to hit a 22 yard FG to extend the game.

On the second play of overtime, Rivers hits Johnson with a 50 yarder inside the Ravens’ 20. Two plays later, Burton sneaks open again, and Rivers hits him for a 10 yard touchdown.

Today (Saturday) was a big day. We had IU putting a glorious, overdue hurting on Michigan. Oh yeah, and we had a needed change in the Oval Office.

It’s been a long, crazy day, but two of my favorite social media ladies were happy to take a last minute request to contribute to this literary masterpiece.

Alcohol and/or sleep deprivation may have been a factor. It happens. 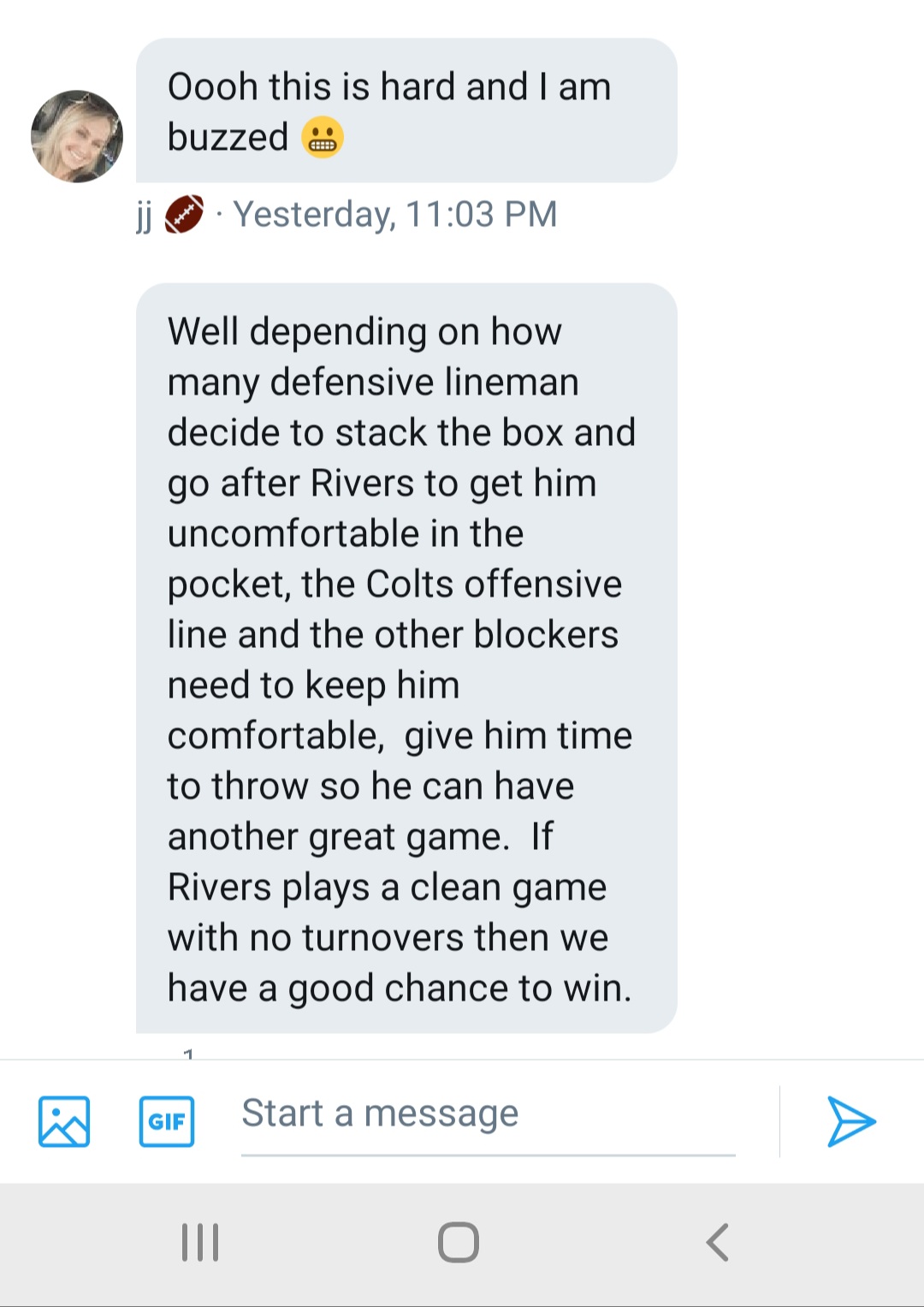 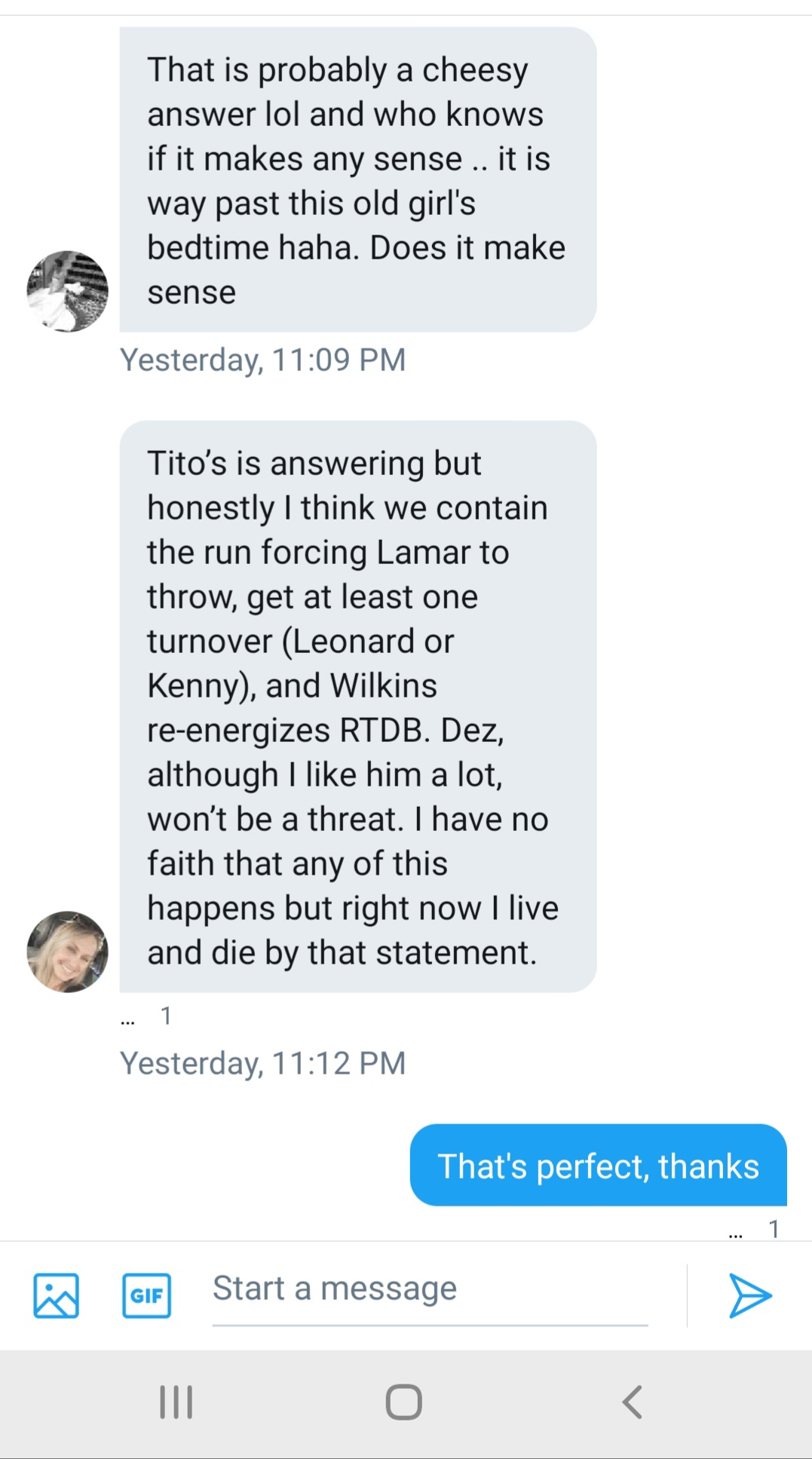 Once again, it’s a lower case “o”, so we’re not talking about the band. One of my offspring predicts the Colts will score more than the other guys because “guinea pigs are cute.” Alright, well, I can’t always control the quality of these answers, but here’s a picture of one of said guinea pigs. 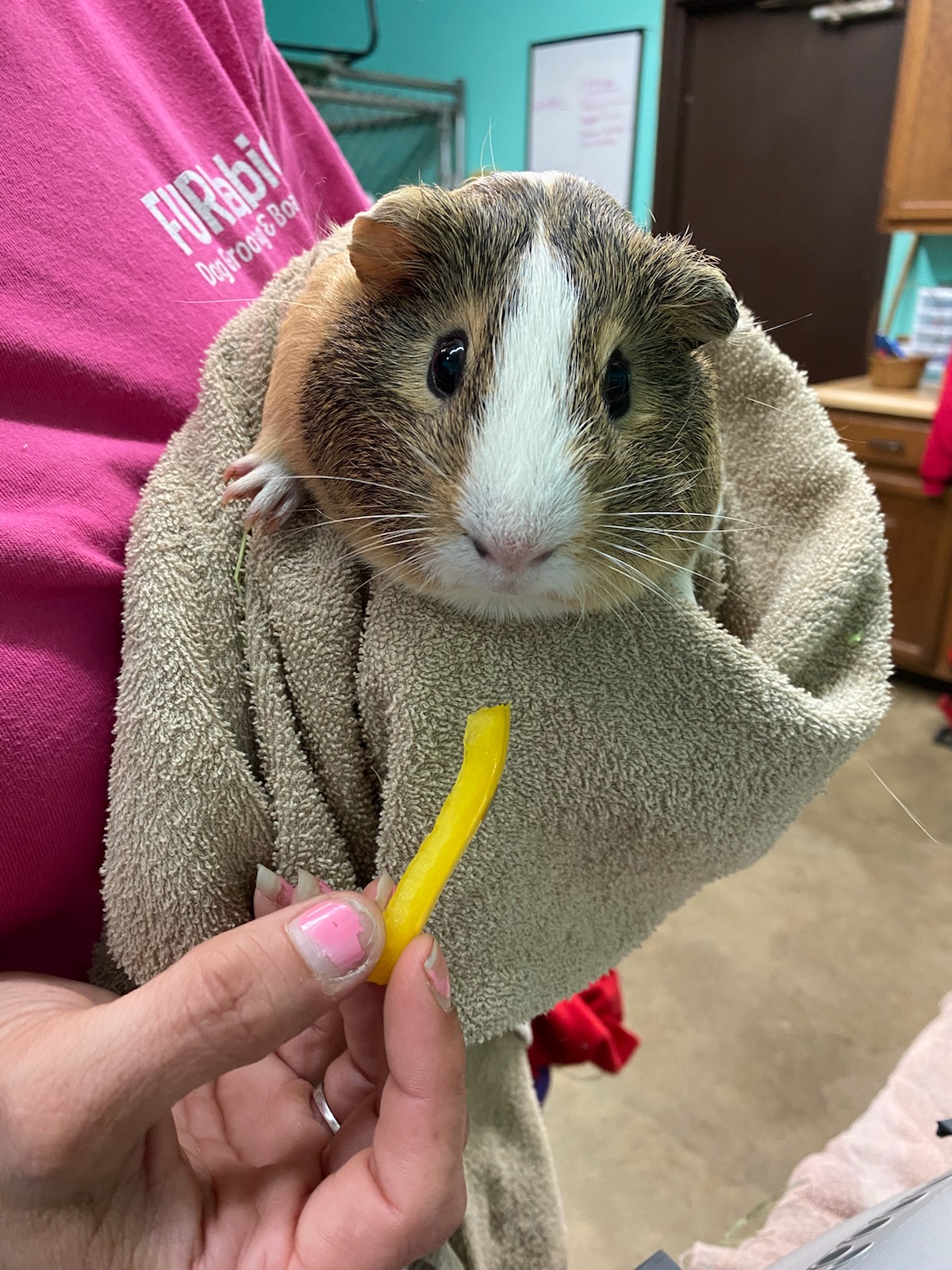 It’s not the same ghost, but it’s to the post.