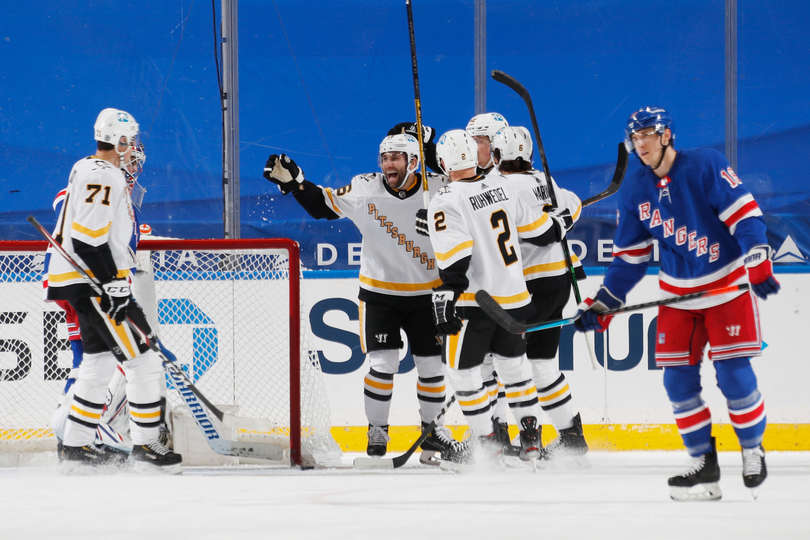 New York Rangers’ goalie Igor Shesterkin stood tall and powered them to a 3-1 victory over the Penguins on Monday night. While it was a strong performance from the Penguins’ top-players as well as their depleted defense-group, it wasn’t enough to snag so much as a point. If anything, this was the hockey gods balancing out one or two of those extra standings points from the Penguins’ shootout victories.

The Penguins were 0-for-6 on the power-play, getting just seven shots on goal.

At some point, you’d think Sidney Crosby would end up anywhere but the left circle on the power-play. After getting a few looks in the bumper position, Crosby once again spent most of the Penguins’ time with the man-advantage at the left circle, which is inarguably his least effective area of the ice. At some point you’d think they would try anything else, but no, it’s as stale as ever.

All situations, the Penguins out-attempted the Rangers 60-46 and had a 26-24 edge in shots. Though scoring chances were nearly dead-even, the Penguins finished with a 3.09-2.0 lead in expected goals, per Evolving Hockey.

Defenseman Kris Letang is designated “day-to-day” and did not play for the Penguins. This resulted in a top-pairing of P.O. Joseph and John Marino. It must be 2024.

Kevin Czuczman drew back into the lineup in Letang’s absence.

Casey DeSmith made his second consecutive start. Tristan Jarry’s -6.9 goals saved above expectation is second worst in the NHL only to former Penguin Matt Murray (-9.8), per Evolving Hockey.

Less than halfway through the game’s opening period, Jason Zucker snuck beneath defenseman K’Andre Miller and made a beautiful move to bury a point shot that had gone wide from Chad Ruhwedel.

Moments before the goal, Evgeni Malkin evaded a hit from defenseman Jacob Trouba to keep the play alive in the offensive zone.

Fight for it + make it count. pic.twitter.com/cNfOGGihkr

Kevin Rooney is starting to drive me crazy. You forget he even exists and then out of nowhere the camera is panning to his extremely unrecognizable face while the Rangers’ god-awful goal horn is blaring. He’s scored both of his two goals this season against the Penguins.

The Penguins’ defense left him wide-open for way too long, as he eventually buried a loose puck to tie the game.

Kreider, from Fox and Panarin.

You love to see it. pic.twitter.com/GgxGIxOuXM

After the Penguins failed to convert on countless power-play opportunities, the Rangers capitalized on a Chris Kreider deflection just ten seconds into their man advantage over halfway through the third period to take the lead.

DeSmith is not at fault whatsoever here, as Marino and Cody Ceci left Kreider wide open, similar to the Rooney goal.

Artemi Panarin struck the empty net with less than a second remaining to boost the Rangers to a 3-1 victory. He had three points on the night (1 G, 2 A), including five shot attempts and 0.46 expected goals, per Natural Stat Trick.

You can see why scouts love Cody Ceci's tools pic.twitter.com/TY3Damyp4C

Originally, the Penguins were headed home for two games against the New Jersey Devils this week, but due to Covid-related issues the games have been postponed. The Penguins will practice in New York tomorrow before flying home. They will be off until Saturday when they return to New York to face the Islanders.