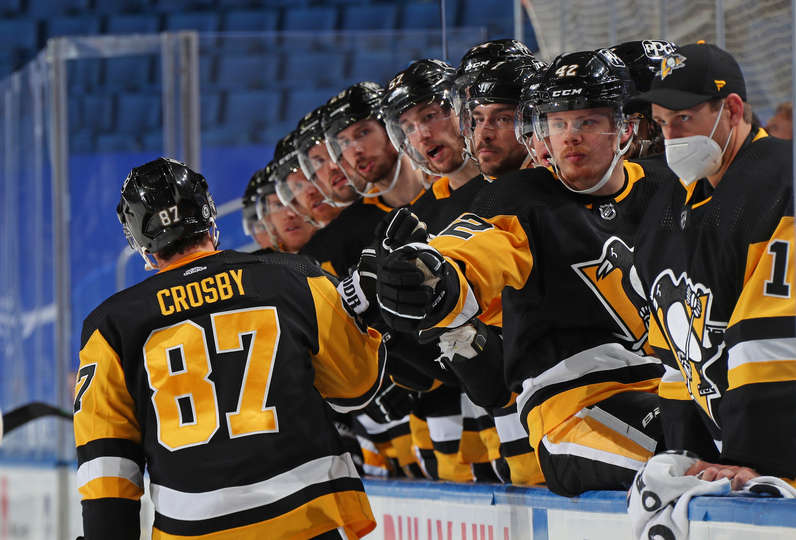 BUFFALO, NY – MARCH 11: Sidney Crosby #87 and his Pittsburgh Penguins teammates celebrate a goal by Jake Guentzel #59 (not pictured) during an NHL game against the Buffalo Sabres on March 11, 2021 at KeyBank Center in Buffalo, New York. (Photo by Bill Wippert/NHLI via Getty Images)

The Penguins have 16 games remaining against the Buffalo Sabres and New Jersey Devils, the basement dwellers of the East division. Right in the thick of the playoff race, they have a giant opportunity to solidify their playoff chances.

The Sabres went without their star captain, Jack Eichel, who is out with a neck injury.

All situations, shot attempts were 46-43 for Pittsburgh, but scoring chances were 19-14 in favor of Buffalo. Evolving Hockey gives the Sabres a slim 1.68-1.55 edge in expected goals.

Chad Ruhwedel is in for John Marino.

Marino missed practice yesterday, but it was dubbed a maintenance day by Mike Sullivan. If he is injured, I wouldn’t expect it to be anything substantial.

Tristan Jarry gets the nod in goal.

Malkin and Kapanen are just ridiculous together pic.twitter.com/13ooyfKoZ1

On-ice shooting percentage regression be damned! Evgeni Malkin and Kasperi Kapanen are en fuego right now as the duo teamed up to get the Penguins on the board for the game’s first goal.

Kapanen made a great read to intercept a D-to-D pass and spring himself for a breakaway. After getting Sabres goalie Jonas Johansson to commit, Kapanen made a slick drop pass to Malkin who buried the puck into a wide-open net.

Thompson’s long reach allowed him to corral the puck away from Crosby as he took it below the goal line. Brian Dumoulin made a mistake by chasing him behind the net, but ultimately Jarry needs to come up with the save.

These are not the three players the Penguins want to see pop up on the scoresheet for Buffalo.

I am extremely critical of Brandon Tanev but I absolutely love him, especially when he’s doing this.

Credit to him for the backhand shot as he realized a defender was about to seal him off. Props to Teddy Blueger as well, who made a great breakout pass to set him free. Their line with Zach Aston-Reese is outscoring opponents 6-0 at 5v5 this season.

Letang steps up because he has Rust supporting on the backcheck and have the numbers, but then everyone just kind of stopped, expecting the pass not to make it to Olofsson. pic.twitter.com/NG8ZHP7bVX

Geoff sums this one up perfectly. Tie game.

This was Olofsson’s eighth goal of the season but his first at 5v5.

Guentzel with an absolute dart pic.twitter.com/YAbwg8Dwi4

The Penguins took the lead back minutes later on a snipe from Jake Guentzel on the powerplay.

Guentzel picked his spot on the far side after Crosby set him up from behind the net. Solid puck movement from the top unit on this one.

Angello gets his first goal of the season and the second of his career. pic.twitter.com/qeyHhvFs0y

The Penguins padded their lead on a blistering wrister from Anthony Angello for his first goal of the season, and the second of his career (15th game).

This game was his best showing in the NHL thus far. More on him in a minute.

Jarry trying to score from the Finger Lakes pic.twitter.com/34An1rhfFF

Tristan Jarry’s attempt to score on the empty net went wide, but Bryan Rust was there to clean it up and seal the deal.

That’s Jarry’s third assist of the season, who now has more points than Sabres winger Jeff Skinner. How’s that for $9 million a season?