Hockey After Dark Night #4: "From goat to GOAT" Edition

Hockey After Dark Night #4: "From goat to GOAT" Edition

Game 2 between the Pittsburgh Penguins and the New York Islanders went down on Tuesday night, and fans were treated to a real pressure cooker.

When the final horn sounded, Pittsburgh had eked out a 2-1 win, tying the series at one game apiece.

The Penguin’s start was perfect: they came out with a clear “shoot first” mentality, and their efforts were awarded early, with Bryan Rust scoring the easiest playoff goal since Max Talbot’s 2009 eephus against the Hurricanes.

This is a dramatic retelling of Bryan Rust’s goal.

Rust picked up a loose puck near the blue line, skated wide, and flung a harmless shot toward Semyon Varlamov, who was starting in net after being inactive in Game 1 (lower-body injury).

Varlamov completely whiffed on Rust’s lollipop, and the goal stunned everyone in the building.

The Penguins kept the ice tilted, and following a nifty pass from Jared McCann from behind the net, Jeff Carter waited out Varlamov and slid a shot past the Islander netminder to give Pittsburgh a 2-0 lead.

The Pens had an opportunity to stretch that lead to 3-0 in the second period when New York’s “Oliver Wahlstrom took a penalty.”

The resulting power-play was brutal, with the Penguins struggling in all three zones of the ice.  Zone entries were either bungled outright at the blue line, or possession was wasted with careless passes.

Fortunately, Pittsburgh was gifted another power-play opportunity when “Oliver Wahlstrom took a penalty.”

…perhaps even worst than the first.

Everything was terrible: no speed through center ice, no puck retrieval on dump-ins, no support.  To call the Penguins’ power-play “listless” would be polite.

After the penalty kill, and after “Oliver Wahlstrom took a penalty” for the third time (coincidental, in this instance), the Isles narrowed the Penguins’ lead when Josh Bailey simultaneously undressed Jeff Carter and Mike Matheson before whipping a (probably deflected) backhand past Jarry.

Pittsburgh carried the 2-1 advantage into the third, and just when it appeared that the Penguins had managed to go the entire game without conceding a man-advantage to the Islanders, Bryan Rust had himself a brain fart.

I write this with a measure of respect: Bryan Rust’s very obvious penalty for grabbing the puck in midair, turning his hand, and trying to throw it down the ice while trying to protect a one goal lead in a must-win game, is the absolute low point of Rust’s career to this point.

It’s not often that you can readily point to a moment where a player hit rock bottom, so I’m more fascinated than critical.

For instance, Steve Smith carelessly bounced in a puck off of Grant Fuhr, to effectively end the Oilers’ Gretzky Dynasty:

Patrick Stefan missed an empty net, and to add salt into the wound, the Edmonton Oilers raced down the ice to tie the game with 2.5 seconds left:

And then, there was the time that the entire Chicago Blackhawks’ team just decided to completely ignore the best player in the league when trying to take Game 1 of the Stanley Cup Finals into overtime:

In immediate retrospect, this killed Chicago’s winning streak and effectively handed the Stanley Cup to the Penguins

Rust’s gaffe, had the Islanders scored, would have occupied a place in hockey infamy.

Fortunately for Rust, Tristan Jarry and the Penguins’ penalty-kill bailed him out, allowing for Pittsburgh to escape with the win.

Jarry stopped 37 of 38 shots, and demonstrated much more patience in net.  Jarry was able to stand tall on several scoring chances when it was clear that the Islanders were targeting him high.  He had a little trouble with puck control and surrendered two or three bad rebounds, but he was able to recover with his athleticism.  All in all, Jarry was tremendous.

The two teams will meet again on Thursday night, with the Islanders now holding home-ice advantage in what is now a Best-of-Five series.

Lightning Captain Steven Stamkos scored his first goal of the playoffs, and Tampa Bay flipped the home ice advantage script on its head with its 3-1 win and 2-0 series lead.

The drama that had permeated Game 1 was largely gone in this contest.  Florida dumped Sergei Bob in net after only one game, opting instead to go with Chris Driedger.

Sorry Driedger, but Krieger is where my mind immediately goes.

Driedger wasn’t the reason why the Panthers lost: that distinction would go to the Panthers being able to string together possessions coupled with a strong bounce-back game from probable Vezina Trophy winner Andrei Vasilevskiy.

Oh, and they lost because of Keith Yandle.

I’d post a link to Yandle’s horrific giveaway that turned into an empty-netter, but I’m pretty sure the comments contain threats constituting federal crimes, so imagine the Bettis Fumble having a love-child with Carlton Bank’s last-second desperation heave.

Tampa Bay has never lost when leading a series 2-0, but much stranger things have happened in Florida.

The Las Vegas Golden Knights are the Arizona Cardinals of the NHL, and as such, the Golden Knights should be the defacto Western Conference rooting interest of every Penguins fan.

In a very related story, Marc-Andre Fleury was once again spectacular in goal for the Golden Knights, and Fleury now holds a sub-1.00 GAA in the playoffs following Las Vegas’s 3-1 victory over the upstart Minnesota Wild.

Fleury current sports a .969 save percentage to go along with his 0.98 GAA.  Perhaps even more importantly for the Golden Knights, they managed to solve Cam Talbot, with Alex Tuch finding the back of the net twice in the win. 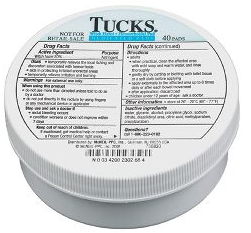 Sometimes, you have to take the easy layup.

The series will shift to Minnesota on Thursday night.  The Golden Knights will hope that their Captain, Max Pacioretty, will be able to return from an undisclosed injury.

The Capitals will travel to Boston to face the Bruins in the third game of their evenly matched series.  Games 1 and 2 both required overtime to settle things, and that level of exertion bodes well for the Penguins should they advance to the second round of the NHL playoffs.

Craig Anderson will once again man the net for the Capitals and will be tasked with keeping Washington afloat.

The Predators are facing an uphill climb against the deeper, more talented Hurricanes.  Nashville is clearly playing with house money with no real expectations of success, so playing loose and aggressive is their best hope.

Edmonton Oilers versus the Winnepeg Jets (this will be Game 1)

Let’s not kid ourselves, this game and series are basically an extension of “McDavid Watch™,” where the NHL audience watches solely to see what the presumptive Hart Trophy Winner does next.

Edmonton is top heavy offensively, but when your singular offensive weapon is a Tsar Bomb, you’re going to be okay.

“I think you’re headed for a breakdown, so be careful not to show it…”

Yeah, well, too late for that.  The Avalanche are too fast, too skilled, too good for St. Louis, who are destined to leave this series singing the (ahem) “Blues.” 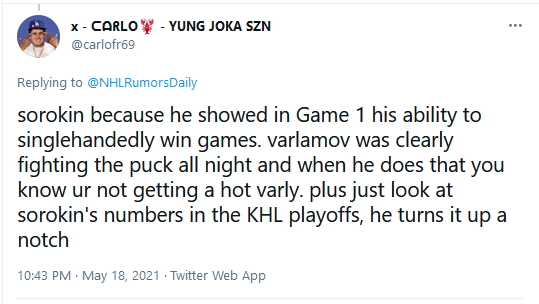