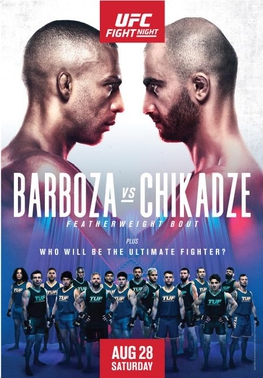 Sabatini comes out of one of the fastest rising camps in the game in Daniel Gracie Jiu Jitsu (also known as Renzo Gracie Philly). It seems like all of the guys coming out of that camp have a similar style – incredible wrestlers who have paired it with suffocating jiu jitsu. Sean Brady has made his way into the welterweight top 15 with it, now Sabatini is replicating it at featherweight. He controlled Tristan Connelly for nearly the entire fight in his debut, and that isn’t easy to do. Expect him to look to do the same in this fight – only add more submission attempts.

In a sense, Sabatini hasn’t really been overlooked too much. He comes into a fight with Jamall Emmers as only a slight underdog at +166 (Odds by FanDuel). That tells you something about how the bookmakers see him given that Emmers went the distance in a split decision with headliner Giga Chikadze. However, if we are to say the hype is still not big enough for Sabatini, it’s because his style typically doesn’t produce big highlights. It may not be here either, but like his teammates, it’s hard to stop.

Jamall Emmers is a guy who is used to having a wrestling advantage on everyone he fights. So far he’s fought Giga Chikadze and Vince Cachero, neither particularly known for their strong wrestling skills. Although he has scored takedowns at a decent clip, his ability to keep opponents down is not stellar. He averages just under a minute of top control time per takedown. Pair that with Sabatini, who gained nearly 10 mins of control time with only one takedown, and you can clearly see who holds a positional advantage. I expect the wrestling to lean heavily in Sabatini’s favor here and be the difference-maker in this fight.