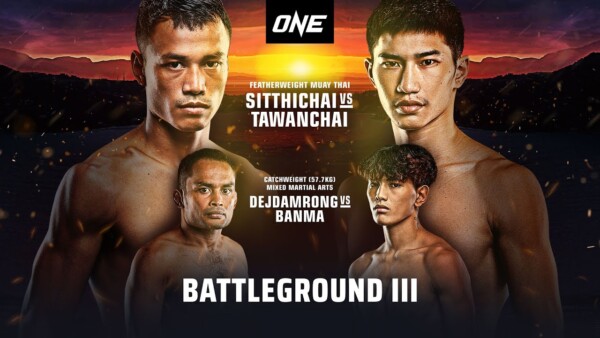 ONE Championship wraps up its ‘Battleground’ series this Friday, August 27th with the aptly named ‘Battleground III’. The series was pre-recorded at the Singapore Indoor Stadium on July 30th, meanwhile, the results have been shrouded in secrecy as always.

Former Glory and Lumpinee Stadium champion Sittichai was unsuccessful in his ONE debut, falling by decision to another countryman in Superbon Banchamek back in July 2020. The 29-year-old will be keen to add the ONE title to his already well-stocked trophy cabinet, and a win over Tawanchai would certainly catapult him up the rankings.

He will have his hands full however against Tawanchai, a 22-year-old phenom who made an impressive debut at ONE: Dangal in May, knocking out Irishman Sean Clancy with a head kick. A win over Sittichai would certainly put the former Thailand champion right in the mix for the title held by long-time champion Phetmorakot Petchyindee Academy.

In the co-main event, inaugural ONE Strawweight Champion Dejdamrong Sor Amnuaysirichoke (11-6) is back in action, taking on rising Chinese star Banma Duoji (13-1).

Thai star Dejdamrong is looking to rebound from a split decision loss to Hexi Getu back in October. The long-time ONE staple is 5-6 since losing his title way to Yoshitaka Naito back in 2015, and at 42-years-old, will likely need to kick off one more title run this Friday against Duoji.

Duoji is back in action for the first time in two years, his last appearance being the only blemish on his record so far, a decision loss to Andrey Marchenko under the Kunlun Fight banner in his native China. The 22-year-old will certainly hold the advantage in terms of youth and is presented with a huge opportunity to announce himself to the ONE faithful, up against a combat sports legend.

Elsewhere on the card, the final entrant into the ONE Women’s Atomweight Grand Prix will be decided, as Bi Nguyen (6-6) and Jenelyn Olsim (4-2) do battle for a place in the last alternate bout opposite American, Grace Cleveland.

Nguyen is riding high off the back of her upset win over Indian star and grand prix contestant, Ritu Phogat in May. Olsim also comes into the bout with some momentum, following a submission win in her last outing, against Maira Mazar at ONE: Fists Of Fury III in March.

‘The Dragon Leg’ is a training partner of Burmese superstar Aung La Nsang and has had all of his professional fights under the ONE banner, the last of which was back in February when Paul Lumihi submitted due to strikes at ONE: Unbreakable III.

Long-time Road FC veteran Jong, for his part, was unsuccessful in his ONE debut in November, a decision loss to Geje Eustaquio. The bout followed two wins on the ONE: Warrior Series, a proving ground for up-and-coming talent.