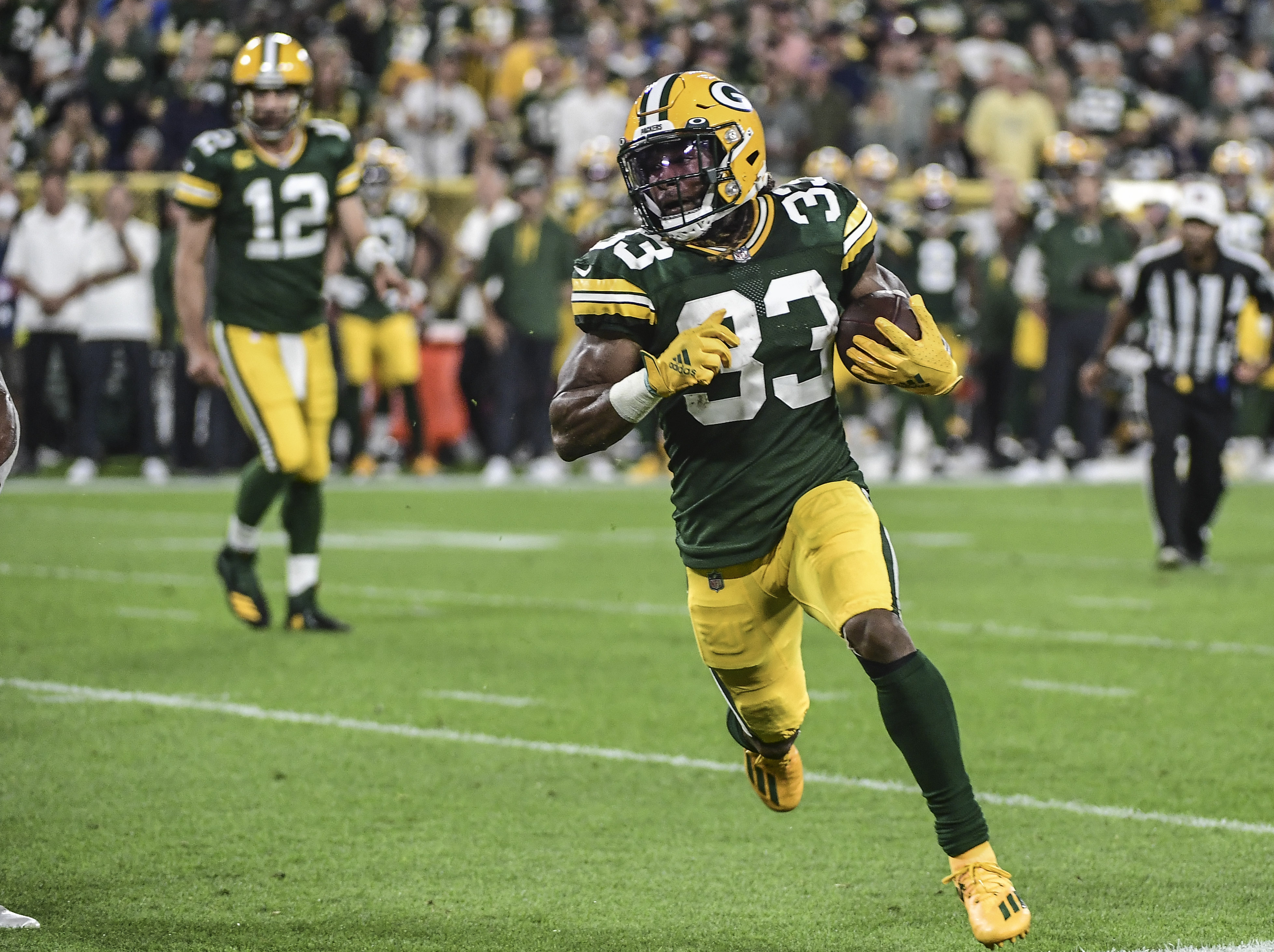 The Green Bay Packers got back on track with a 35-17 win over the Detroit Lions at Lambeau Field Monday night. Aaron Rodgers threw four touchdown passes and Aaron Jones ran for a touchdown and caught three TD passes.

The win evened the Packers record on the season at 1-1 and placed them in a tie with the Chicago Bears for first place in the NFC North.

Here are 10 things we learned from the Packers 35-17 win over the Lions:

The Packers virtually ignored Jones in Week 1 but he was a focal point of the offense against Detroit. Jones scored four touchdowns in this contest, one on the ground and three as a receiver. It was the second four touchdown game of Jones’ NFL career.

Jones finished with 115 total yards which included 67 yards on the ground and 48 more as a receiver. The Lions were never able to figure out how to slow Jones down and the result was a 35-point game for the offense.

Packers head coach Matt LaFleur admitted his play calling wasn’t great against the Saints but he certainly corrected that against Detroit.

After running the ball only 15 times in Week 1 (and seven of those in garbage time) the Packers three running backs totaled 24 attempts this week and all of them mattered. The Packers gained a respectable 96 yards on the ground (99 if you don’t count three plays by Jordan Love in victory formation) but were effective at sticking with the running game and mixing up their play calls.

The offense was also patient. In the first half, the Lions tried to do what the Saints did the previous week and take away the deep pass with a deep zone coverage. The Packers countered with effective short passes and runs and used pre-snap motion and schemed some receivers open on several plays.

The Packers scored 35 points and had a solid overall offensive performance.

Kevin King continued to struggle. The Lions came out and attacked King early with their first two pass plays going to receivers covered by the veteran corner. The second one was a 46-yard bomb to Quintez Cephus that set up Detroit’s first touchdown of the game.

King was beaten too often and although he was credited with one pass break-up, his first half performance was not good.

The Packers must figure out what to do with the second cornerback spot because King continues to give up too many big plays.

Aaron Rodgers looked like himself again and that is great news for the Packers and their fans. For the game, the reigning league MVP completed 22-of-27 passes for 255 yards and four touchdowns without throwing an interception.

His touchdown pass to tight end Robert Tonyan was a pinpoint pass with a small window between two defenders and yet Rodgers put the ball exactly where it had to be and the result was six points.

He also found Davante Adams on a beautiful 50-yard pass downfield on a key third-down situation that gave the offense rolling in the second half.

After going just 1-for-10 on third down conversions in Week 1, the Packers bounced back with a 5-for-9 performance this week and held the ball for 33:25.

Best of all, Rodgers seemed to having fun out there again. Several times he had a large smile on his face and that is a great sign for Packers fans as well.

The Packers defense struggled to get pressure on Jared Goff, especially in the first half and as a result, Goff looked like an elite quarterback early on. He finished the half by completing 13-of-16 for 137 yards and two touchdowns.

The Packers didn’t come close to sacking the quarterback in the first half and as a result, Goff just picked the defense apart. In fact, if it weren’t for a series of penalties on the Lions second drive, the Lions would have scored on all four of their first half possessions.

In the second half, once the Packers took the lead, they were able to generate a little bit of pressure with six quarterback hits total in the game including one by Jonathan Garvin that led to the interception by De’Vondre Campbell.

If the Packers defense doesn’t get more pressure on opposing quarterbacks, they’re going to be in for some difficult games especially when they start to face some of the league’s better quarterbacks.

Davante Adams was once again a huge part of the Green Bay passing attack. The Pro Bowl receiver finished the game with eight catches (on nine targets) for 121 yards including the 50-yard bomb that helped the offense gain momentum in the second half.

Adams did a good job at running with the ball after the catch and juked a few defenders on his way to picking up some key yardage.

When he and Rodgers are on the same page, they are very tough to stop and this game was no exception.

The Packers special team unit showed some spark in this game although there is still more work to be done.

The highlights included a 41-yard kickoff return by Kylin Hill that included a hurdle of the kicker at the end of the play and Mason Crosby hitting on all five extra points. Punter Corey Bojorquez averaged 46.7-yards per kick and placed two of his three punts inside the Lions 20.

Unfortunately, the kick return coverage unit allowed a 33-yard run back by Godwin Igwebuike that gave Detroit great field position. So, while far from perfect, the special teams unit was much better than it was in Week 1 and showed signs of progress.

While the Packers defense improved in the second half, holding Detroit to just 147 yards after halftime, the rain that fell certainly helped stop the Lions.

Goff patted the wet ball on a pass play and lost a fumble. He bungled another snap from scrimmage and generally had some trouble with the football after the rain started.

Detroit also committed some ill-timed penalties that disrupted some drives.

The defense did make some adjustments in the second half and the Packers took advantage of the mistakes the Lions made, but Joe Barry’s defense is still a work in progress.

First round draft pick Eric Stokes still made a few rookie mistakes, but he had a good overall game and was credited with a pair of pass breakups which led the team.

Stokes will struggle at times, but he has potential and the time for him to take snaps away from King appears to be approaching.

Linebacker De’Vondre Campbell was all over the field for the Packers. The free agent acquisition finished the game with a team-leading 13 total tackles, broke up a pass and recorded the Packers first interception of the season.

Campbell had a few iffy moments as well, especially in the first half, but he was in the middle of the action all game long and overall gave the Packers better play at ILB than they’ve had in recent years.