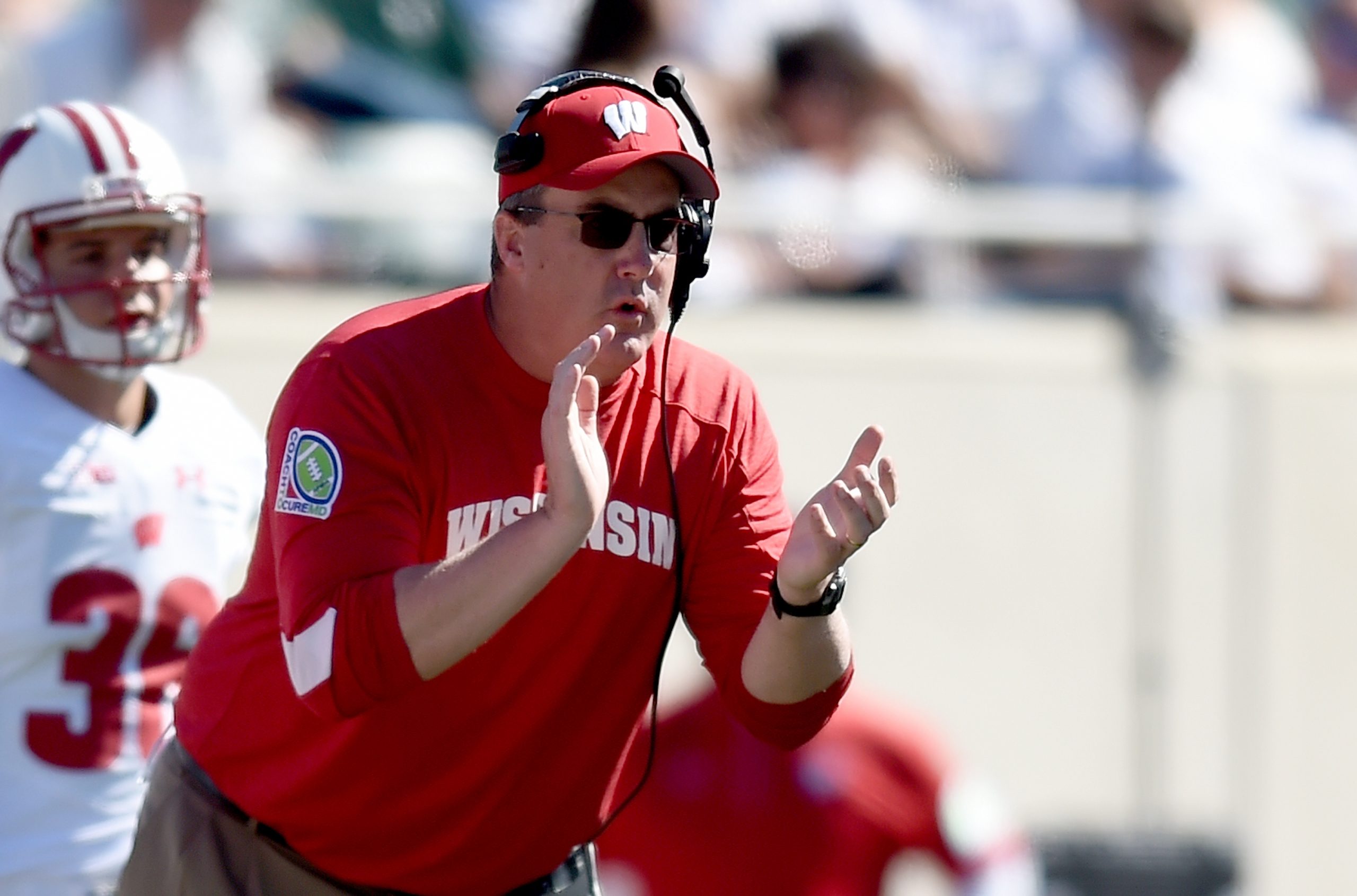 What has been long reported as contract negotiations now appears to be a done deal, as Badgers defensive coordinator Justin Wilcox is off to Cal to become its head coach on a 5-year deal according to further reporting.

That means UW will be in a position to find its third defensive coordinator in as many years. Not exactly ideal, but is this happening at a good time for the program? Perhaps it is (and more on that later).

We know that this defense is going to be a 3-4 defense going forward. If Paul Chyrst wanted to switch back to the 4-3 look, last season would’ve been the time to make that move. So, the pool of coaches narrows down a bit with that knowledge.

Who exactly would we be looking at if we were in Chryst’s shoes?

Insiders may have an advantage, but few younger coaches in the world of college football have been as impressive as Chinander. He’s got a Big Ten pedigree, having been an offensive lineman at the University of Iowa in the early 2000’s and at the age of 37 certainly has a youthful edge to him.

This past season, Chinander moved along with Scott Frost from Oregon to UCF as the new defensive coordinator. All that happened was a remarkable turnaround from a team that went 1-11 in 2015 to 6-6 this past season. A big part of that change was a defense that made a huge step forward.

UCF finished this past season 10th nationally in defensive efficiency, while going from giving up 37.7 points to 24.6 points per game this past season. That was good enough for third in the AAC and 41st nationally.

Overall, this is an incredibly quick turnaround and the best days may be ahead for the Knights defense. It also may be attractive to get someone with ties to bigger recruiting areas like California and Florida as well.

Maybe the raw numbers don’t impress given where Wisconsin has been, but consider the quick turnaround of a miserable defensive record. Chinander is also an outside linebacker specialist, and Wisconsin has a great group of linebackers overall.

Chinander’s biggest strike against him? He’s got limited experience as an actual defensive coordinator. His only experience leading a defense came last season. But, of course, as we’ve shown, that was one heck of a defensive performance as well.

Will Chryst look to someone outside the Badgers sphere who is so young and overall inexperienced as a leader of the defensive coaching staff?

Those inside the program believe this is the big name to watch in the search for a new defensive coordinator. In just one year on the job, Chryst and Co. have been blown away by Leonhard’s transition from NFL player to the college coaching ranks.

Players have raved about his ability to translate his knowledge of the game to his players on the field, and few coaches on this staff have the respect and admiration of the players like Leonhard does. He also gets the concepts that make this style of defense work, having played in the 3-4 defense for big parts of his career in the NFL.

Sure, it may be a bit of a gamble to go with a coach who has literally been in the profession for one year, there’s just those coaches you know are destined for greatness. Do you wait because of convention or jump because of talent?

Given Wisconsin’s seemingly revolving door at defensive coordinator as of late, getting a dedicated Badger in position to lead the defense may be a very tempting situation. Stability seems to be the name of the game for the coaching staff under Chryst and that would be achieved with this move.

How many times can one get passed over for a job and still stay in the same spot? Many believed Chryst was down to an internal-external final two between Tibesar and Justin Wilcox this past season. Obviously Wilcox got the job and went on to do great things.

Will Chryst look internally at the guy he passed over last season once again this offseason? It could be a possibility, especially if Chryst doesn’t believe that Leonhard is quite ready for the jump to a coordinator job this early in his career. Don’t be surprised to see Chryst make this decision with the future of the Badgers defensive coaching staff in mind.

Tibesar has experience as a defensive coordinator, leading Purdue’s defense in 2012 (Yes, that will actually be put on his resume). Despite the poor reputation of Purdue football, the numbers would suggest one of the better Purdue defenses in a long time. That 2012 defense led the Big Ten in interceptions, forced fumbles and takeaways.

He also has the advantage of being one of the best coaches on the staff, plugging in player after player at outside linebacker and not seeing production levels drop one bit.

This could be the safe hire, but also the smartest one of the bunch.

Wisconsin needs to cast a wide net to look for its next defensive coordinator and making a swift move is only wise if that person is an internal candidate. However, if the Badgers are going to cast a wide net, one name that should be on the list to contact is Appalachian State DC Nate Woody.

He’s got a good pedigree in the 3-4 defense and is versed in coaching inside and outside linebackers at lower levels of the game. But, it is Woody’s work over the last four seasons as App State’s DC that should attract Chryst’s attention.

App State have transitioned nicely from the FCS to the FBS level, and a large part of that has been its stifling defense. After a rough transition in 2014, where the Mountaineers finished 81st in defensive efficiency according to Football Outsiders, this team has shot up to 11th in 2015 and 20th this past season.

Additionally, Woody is engrained in the recruiting of players in North and South Carolina. Wisconsin has always had an interest in players out of those states, but only has dipped in there thanks to the connections of running back coach John Settle.

There’s a lot to like about the 56-year-old coach, but the question is if Woody would have the interest in uprooting his life at that age at a shot for a job like Wisconsin. Ultimately that may be the factor that eliminates him from contention. Still, it would be worth a phone call.

If youth isn’t going to be served, why not look at one of the most well-traveled and well-respected defensive coordinators in the country? Koenning should be a name familiar to some in the Badgers fanbase, as he was the artchitect of a huge Illinois defensive turnaround in 2011, it just wasn’t enough to save Ron Zook’s job in Champaign.

Oh, and did we forget to mention he was the man behind the Troy defense that muted Wisconsin’s offense in 2015? Remember that 28-3 game? I sure do, and I remember it for not allowing Wisconsin much room on third downs (3-10) or to go completely off considering how much the Troy offense was stifled on the day.

Wisconsin may have put up 401 total yards on the day, but no running back went over the 100-yard mark. It also hit a few big individual plays to score two of its four touchdowns in a pretty plodding effort.

That said, Koenning has consistently put up some of the best defenses in the country no matter where he is. Currently, Koenning is heading in to his third season at Troy, but has also had stops at Clemson and Kansas State in addition to Illinois.

While he has been a bit of a journeyman, it could be exactly what is needed should Chryst be looking to groom Leonhard for the job in the near future. Koennig’s Trojans defense finished this past season 21st in the country in defensive efficiency according to Football Outsiders, while also being one of the most proficient at turning opponents over as well.

This could be the best marriage possible between experience and being able to transition in to a younger coach relatively soon. However, would Koenning jump at another Power 5 offer this late in his career? Either way, it is worth a phone call. 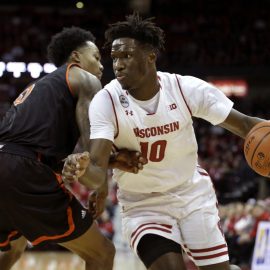