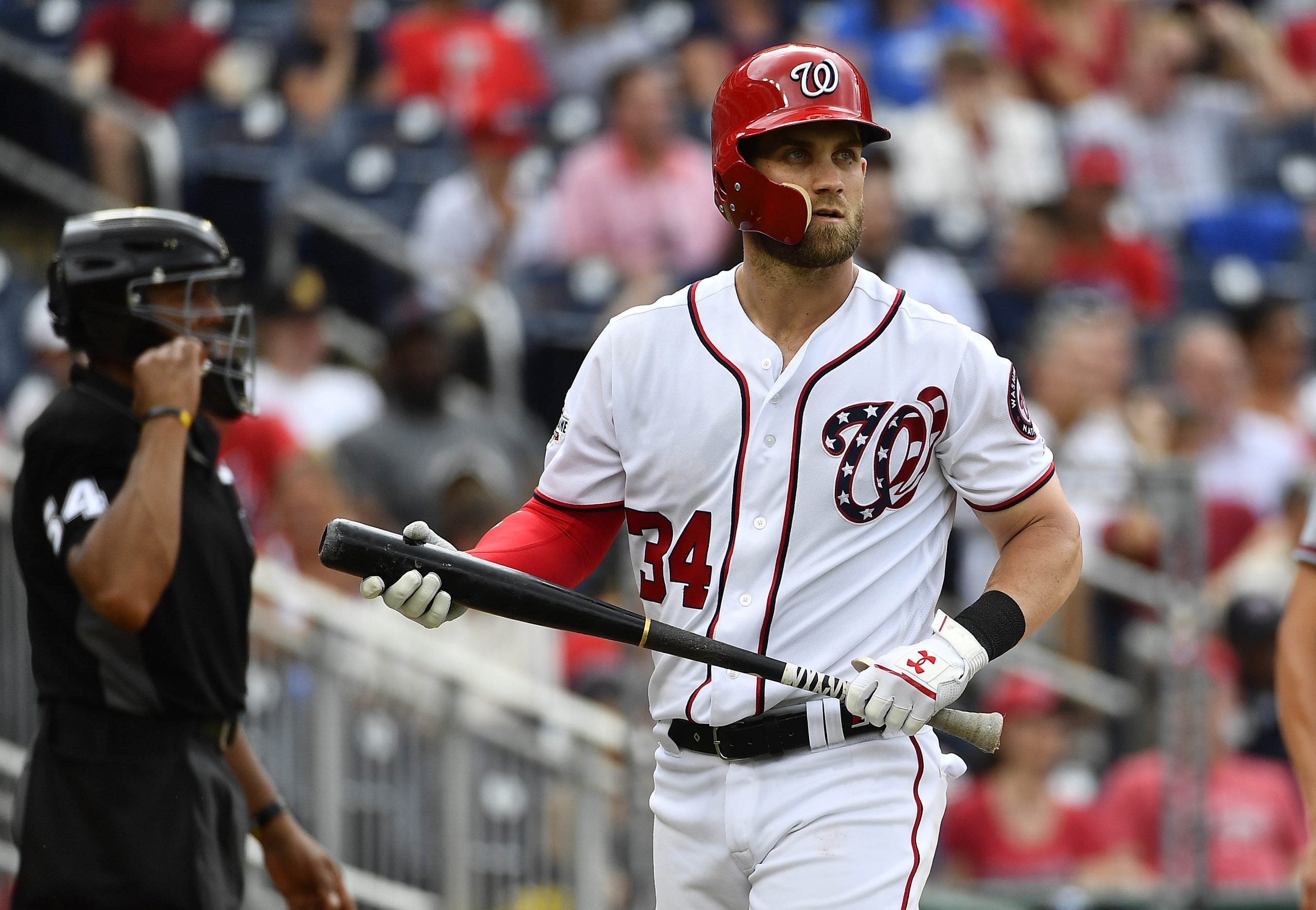 Harper will turn 26 in October and is expected to become the highest paid player in Major League history. The richest contract in MLB history (in terms of total money) belongs to Giancarlo Stanton. The Yankees’ outfielder (then with the Marlins) signed a 13-year, $325 million extension with Miami prior to the 2015 season. Stanton is the only player in MLB history to receive a contract of more than $300 million. He is one of eleven players to sign a deal of at least $200 million.

Prior to the 2018 season, it was thought (if not assumed) by most people around baseball that Harper would receive a contract approaching $400 million this off-season. It’s still likely Harper will surpass Stanton’s record contract, but I would caution any team before signing the 2015 National League MVP to such a lucrative deal.

Here’s an example of statistics from a few players this season. One of these players is Harper, while the other two are also upcoming free agents. These statistics are entering play Saturday.

Player 2 is the aforementioned, Manny Machado.

Player 3 is the aforementioned, Bryce Harper.

I’m obviously not saying any club should sign Markakis to a $400 million contract. In all honesty, he’ll be lucky to get a multi-year deal this offseason due to his age (35). One year doesn’t—nor should it—mean everything in regards to signing players to long term contracts. However, Markakis is having just as good a season as Harper is—if not better in certain respects.

Like Harper, Machado is also expected to sign a lucrative contract following the 2018 season. The Dodgers’ infielder just turned 26 on July 6 and has proven to be just as much of a productive force at the plate as Harper in recent years.

(The home run and RBI averages through out the column are based on Baseball Reference’s per 162-game season calculations).

Below are the statistics of three other upcoming free agents. I believe (based on recent trends) that a General Manager could sign these players to contracts for less average annual value then it would take to sign Harper or Machado. The following statistics are averages from the last three seasons.

Adams will turn 30-years old at the end of the month. He signed a one-year, $four million contract with the Nationals in December. He’ll likely sign a multi-year deal following 2018. I project he will sign a two-year, $20 million deal—so an average value of $10 million per year.

Moustakas signed a one-year, $6.5 million deal with the Royals prior to the 2018 season. He initially turned down a qualifying offer of more than $16 million for 2018. Moustakas was hoping to earn more in free agency, but misjudged the market. He has a $15 million mutual option on his deal for 2019, though the Brewers—who acquired the 29-year old third baseman in late July—are unlikely to pick it up. I project him to sign a three-year, $35 million contract this off-season, which would equate to an average annual value of $11.7 million per year.

McCutchen has the pedigree of a superstar player—NL MVP, five-time All-Star, four-time Silver Slugger and a one-time Gold Glove winner. However, his production—while still good—has gone down in recent years. He’ll turn 32 in October. I project him signing a contract roughly around the four-year, $50 million range. That would be an average annual value of $12.5 million.

Based on my projections, a team would pay roughly $105 million to fill three positions (as opposed to at least $300 million) to fill one. The combined average annual values for the contracts listed above is approximately $34.2 million per year.

You could even sign some underrated starting pitchers to boost your rotation for the upcoming season. Here are some pitchers that I’m projecting will make less than $ten million in average annual value for the 2019 season and beyond. The following statistics for each player are from 2018.

As of now, I project Eovaldi to get about $eight million next season.

I project Sanchez to get $five million next season.

It’s possible a team could sign four of the six players mentioned for about the same price of a Harper or Machado (based on average annual value).

I’m not saying any of those players are at the levels of Harper or Machado. I’m saying teams should value signing consistent players on short term deals over signing one amazing player to a long term contract. There’s only one player in the game I would consider giving more than $300 million to—Mike Trout.

Harper and Machado are great, but their not at Trout’s level. Trout aside, one amazing player is not worth four good-to-great ones.