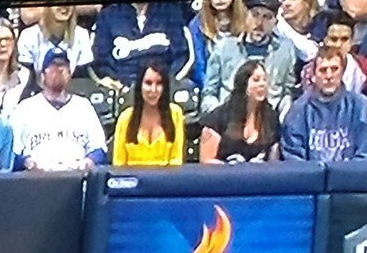 MLB fans who haven’t watched many Brewers games this season very much enjoyed seeing a familiar face who attends nearly every game at Miller Park.

Front Row Amy, arguably the team’s biggest cheerleader, turned plenty of heads, and a number of casual fans were wondering exactly who she is. First off, here are some shots of her at Game 1 of the NL Division Series on Thursday.

@FrontRowAmy is on my TV. I’m a cardinals fan, but this post season I’m rooting for the Brew Crew. Would love an NL Central team to win the WS. pic.twitter.com/qV8wUBDfVJ

UPDATE: She was also spotted at Game 2, because of course she was.

Front Row Amy next to a random guy wearing a throw back John Elway #BrewersvsRockies pic.twitter.com/eBAU1ubjfO

Pictured: John Elway in Milwaukee for the NLDS, seated next to Front Row Amy pic.twitter.com/a6pP789pOE

Here are some more photos of her.

The @Brewers are back in the #Postseason, so it’s time to follow @FrontRowAmy once again. They’ll, I mean she’ll be there, front and center at all Milwaukee home games. I think you’ll notice. pic.twitter.com/UumjVU9PLD

Guys, that is @FrontRowAmy behind the plate at the Brewers game. pic.twitter.com/RYa8x5xql2

She’s a big fan, apparently. And while we can’t confirm or deny that she was the reason the Rockies were shut out through eight innings, she sure seems to be distracting.