Connecting The Oilers And Flames Via Trade 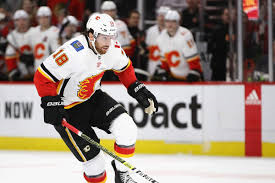 The dogs days of summer are here for hockey fans. For fans of the Edmonton Oilers, these days will drag on even longer than normal. Why? The team has failed to make any kind of improvements in the first summer of Ken Holland’s tenure. To this point, the off-season has been a massive disappointment.

With the news of Micheal Ferland signing in Vancouver and Ryan Dzingel in Carolina, the Oil are quickly running out of options. If Holland wants to add a 20-goal scorer, which he claims he does, he’s likely going to have to do it via trade.

Could an unlikely trade partner fill the hole for the Oil? Dustin Nielson of TSN 1260 dropped a little hint on his show Thursday morning. Twitter user @akaRCN relayed the message.

Bob Stauffer of 630 CHED added a little bit of gasoline to the fire on Thursday when he tweeted out a question regarding Flames RFA Sam Bennett.

What would a deal between the two rivals look like? The Flames have some appealing assets, while the Oilers have some cap space to help alleviate the pressures facing the Flames currently. Put the rivalry aside for a moment, a trade makes some sense between these two.

They’ve only connected on a trade twice this decade. The first, at the 2010 trade deadline, saw veteran Steve Staios head south while Aaron Johnson came to Edmonton. Ladislav Smid was moved to Calgary early in the 2013-14 season in a deal that sent Laurent Brossoit to Edmonton.

The name that sticks out to me on this list is James Neal. Neal had a nightmare first season in Calgary, but the Oilers were interested in him during the 2017-18 season and the club showed interest earlier this summer. Neal is a candidate for a rebound season, and could fill the 20-goal scorer hole. Neal has problems with his game, but he can shoot the puck and has made a career as a goal scorer.

He could fit in Edmonton, possible playing as McDavid’s left winger with Leon Draisaitl shifting back to right wing.

Michael Frolik also makes some sense for Edmonton. He scored 16 goals in 65 games a season ago and has consistently been a middle-six forward throughout his career. A left winger, Frolik would instantly fit inside Edmonton’s top-six as a responsible player capable of chipping in 15-20 goals.

I can’t help but think he’d be a really good fit on a line with Ryan Nugent-Hopkins. Frolik was nearly dealt to the Wild at the deadline, and would welcome a change. Frolik carries a cap hit of $4,300,000, and will be a free agent next July.

RFA Sam Bennett is an interesting case. The fourth overall pick in 2014, Bennett hasn’t lived up to the billing. That said, he’s established himself as an NHL’er and has settled in nicely as a middle-six forward. The 23-year-old scored 13 goals a season ago and has the ability to play center. His 53.5% Corsi For at five-on-five is encouraging, and his 98.1 PDO indicates he was even a little unlucky in 2018-19.

Could Bennett be a top-six forward in Edmonton? Would he fit as the club’s third line center? There are plenty of roles for Bennett with the Oilers, and I’d imagine they have some serious interest in him.

TJ Brodie, should the Oil flip Kris Russell, makes sense as an option as well. The Flames are open to dealing the veteran defender.

Both the Oilers and Flames have undesirable contracts on their hands. Could the sides swap bad deals, with Neal heading to Edmonton and Lucic to Calgary? I’d think that swap favors the Oil, as Neal is a better bet to rebound offensively in 2019-20.

A deal I floated on Twitter was Neal and Bennett for Lucic and Puljujarvi, with other pieces being added from the Edmonton side. Depending on the additional pieces from Edmonton, and there would be some, that deal could strengthen the Oil’s lineup in a big way.

The most likely scenario? The Flames are trying to clear salary and Frolik is on the market. He fits Edmonton’s need for a middle-six forward, and wouldn’t require a long-term investment.

If these two organizations can put their rivalry aside, there is a deal to be made that would help both sides.