Cowboys, Bears fans get into epic fight in stadium after game (Video) 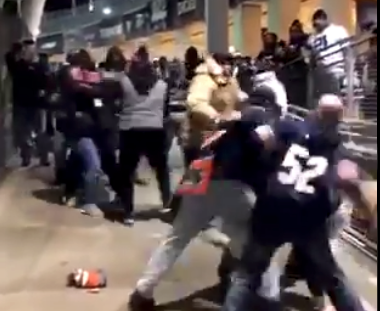 The Dallas Cowboys and Chicago Bears have two of the most passionate fanbases in the NFL, and that was on display after Thursday’s game came to a close.

A primetime, night matchup often results in plenty of time for fans to get some drinks in them and root on their team, but sometimes, it’s taken a bit too far. Fans have been known to puff their chests out a bit, with words turning into actions, unfortunately, and that’s exactly what took place after Thursday’s game ended.

Cowboys fans saw their team lose their fourth game out of the past five contests, and they were not happy about it. As such, they took out their anger on Bears fans, with an epic fight breaking out on the concourse of Soldier Field after the final whistle sounded. Fans of both teams traded punches, as you can see in the video clip below.

Bears kicking the shit out the of Cowboys on the field and in the parking lot (via IG/blakeheisman) pic.twitter.com/EmLTfQcoFw