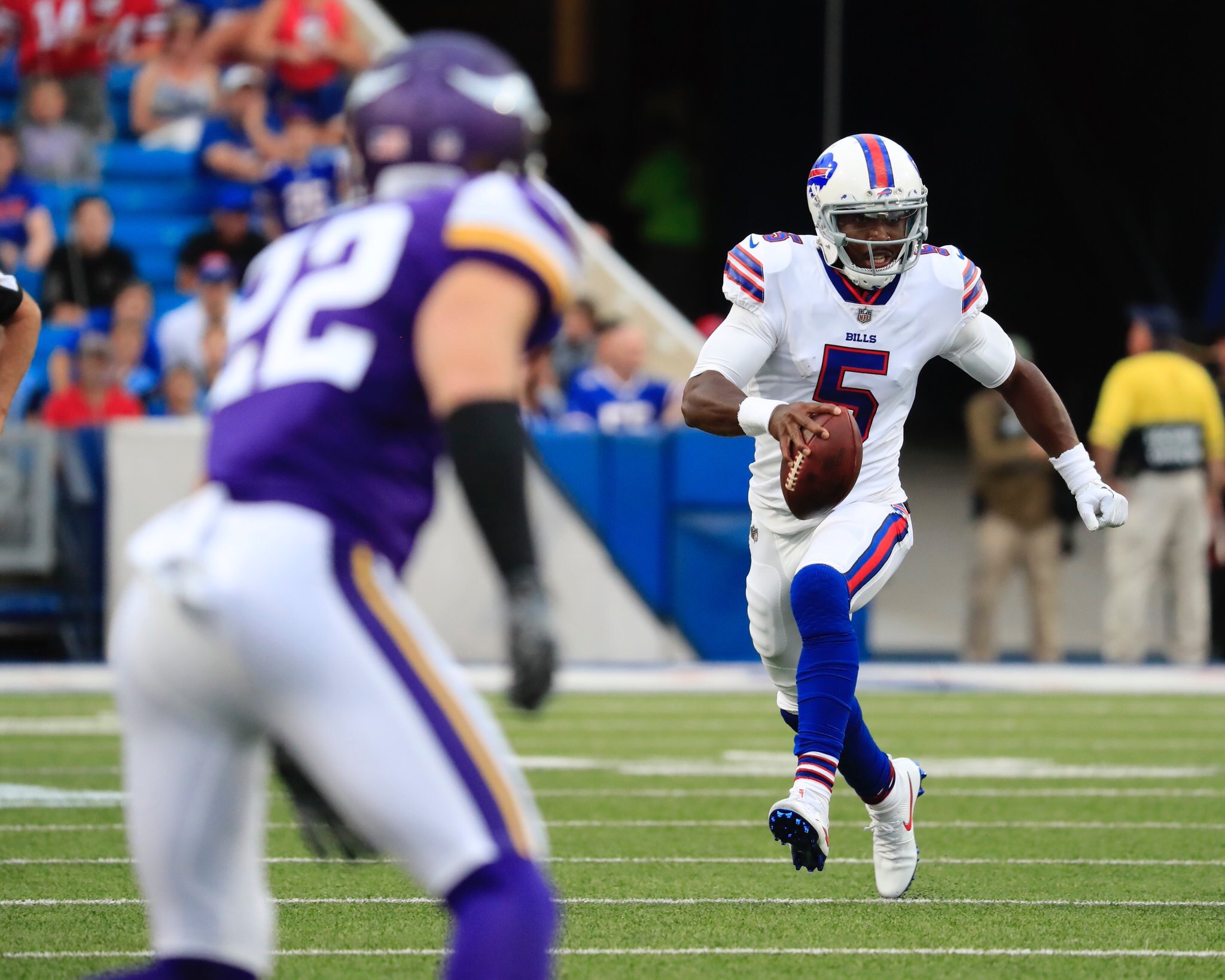 Preseason is a scam. Don’t read into anything. It’s all bullshit. Don’t get too high or too low. Just pray your team gets out healthy. It is fake just like the takes from this piece. Hell, I’m not even gonna edit this piece. If you feel any other way I give you this

1) Sammy Watkins looked good. Kind of surprising how much they got him involved in the first quarter (4 catches for 39 yards) He looked crisp on his route running and looked to be 100%. Obviously this is a huge year for him and the passing game will only go as far as he’ll take them.

4) Liked some of Jonathan Williams runs tonight and what he did in pass blocking situations. I’ve maintained that I feel worrying about TD Mike leaving is a moot point as I feel a RB drafted in the mid-rounds -like Williams- should benefit.

5) XFL, CFL, preseason or regular season, I can say that TJ Yates sucks. If the Bills go to him any time this year, they are truly fucked. And yeah, I didn’t need tonight’s shit storm to come to that 🔥 take.  This is why I didn’t want to trade Cardale Jones because I’d rather have two unknowns with Petterman and him with potential than someone who I know sucks.

6) I’m usually guarded when it comes to hearing about how a camp body looks really good in practice. #FreeEddieYarbrough has been making the waves on Bills media Twitter and we saw first hand why that’s been the case. The guy rocking the Duke Preston, Howard Ballard, Del Reid, and Jonas Jennings’ old jersey number had himself a nice game. He was in on a sack and pancaked Case Keenum (Another shitty backup QB). It’s only one game, but he’s looking like a nice find so far.

7) Penalties!!! But, hey, its preseason and the first flawless preseason game not filled with yellow flags will be the first one these eyes have ever seen.

8) As an expat in Queens, I always forget how awful Buffalo commercials are. Also, One Buffalo owns a lot of the commercials in that market

9) Aside from Boldin signing and all the blow job “McDermott is tough and detailed guy” platitudes, the biggest talking point has been what to make of Reggie Ragland status on team. There are the two camps of “He’s essentially a rookie and he’s coming back from the ACL injury” and the “He doesn’t fit. Should we trade him?” I’m more inclined to go with the first part. I dunno, I don’t think a 2nd round pick at ILB in a 3-4 who had the type of career he had in the SEC, would have this sort of issue transitioning to MLB in a 4-3 cause he’s stupid. I just think he’s a rookie and he’s coming back from an ACL. Also, you aren’t going to jettison arguably your most talented LB when basically your LB core are set to be FAs next year. It stinks it has been a slow process, but we are still only one preseason game in. I’d wanna give it another month before we chalk him up to being just a depth guy for the season. And If he doesn’t start, I wouldn’t panic for his career. Again, serious ACL injury and being a rookie aren’t bullshit excuses as to why he’s been slow to progress.

10) Nathan Peterman looked good on his first drive that culminated into a TD. He accounted for 66 yards in total offense (44 passing yards/22 rushing yards) on a 13-play drive and was 6 of 8. His touch on his throw to Stevie Johnson (#13 will always be Stevie) was really pretty. He didn’t finish strong though on his final drives, but at least he was better than Yates.

11) Read my beginning intro again about this piece.