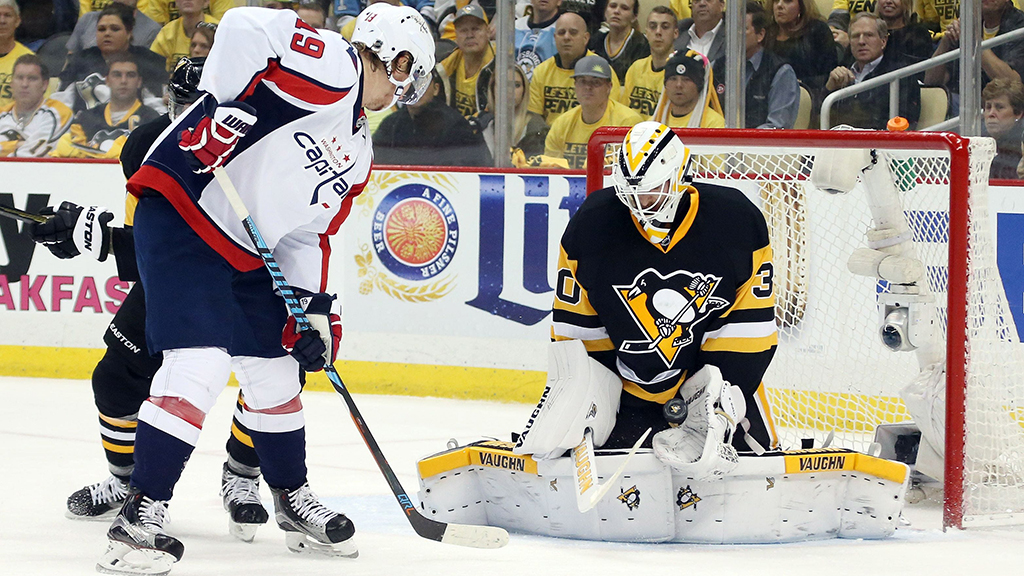 After the first round against the Rangers and the performance in game three, it’s safe to say that barring a monumental self-destruction, the net belongs to one Matt Murray.

Marc-Andre Fleury was back in uniform for the first time this postseason but that didn’t matter. Murray made 47 saves and of the two that beat him? A rocket from Alex Ovechkin and a rebound off the post.

He was locked in.

(ed. Note: I somehow completely missed the Orpik on Maatta hit from game two in my flashback recap – Orpik was penalized for interference. You know the hit, I know the hit, it will not be GIFed.)

The Penguins while they gained Fleury, lost Maatta and Derrick Pouliot stepped in to replace him.

Orpik will miss the next three after his game two hit on Maatta.

It’s not often you can win a game having your shots on goal completely doubled up, but the Penguins did it. The advantage in this one is squarely with the team in black and gold.

If the Pens find themselves in a position to win game four, hoooo boy it may be another “Caps fold in the playoffs” year.

Some roster shakeups were in order with Orpik being suspended and Maatta being injured.

Taylor Chorney slotted in for the Caps and Derrick Pouliot took Maatta’s place.

MAF was back in uniform for the first time these playoffs and he backed up Murray. Solid little insurance policy for the Pens there.

It was a clunky start to the game with several whistles and icings but the Capitals brought the shots early.

Murray showed us he was locked in right off the hop.

Two minutes in, the villain TJ Oshie was able to break away from Dumoulin on the way and get pretty much half the offensive zone to himself while swooping in on Murray.

The confidence to hold the glove up as if to say, “Yup. I know. I got it” is legend shit.

For nearly the first seven minutes of the opening frame the Penguins didn’t have much zone time, shots on goal, or puck possession. So naturally, they opened the scoring.

Daley fires a good, low, hard shot on net, Hornqvist gets a redirection and the Pens were on the board.

A minute later, it was the fourth line coming through.

A 2-on-1 with Cullen and Kuhnhackl took quite a bit of luck to go in. Cullen’s attempt at a dish over to Kuhnhackl deflects off of Niskanen’s stick and somehow hits Kuhnhackl in the back, leaving Holtby again unable to track the puck and it goes in.

If NHL discipline is consistent and we all know that is a stretch, the Penguins are likely going to be without Letang for a game or more.

Letang cuts across the middle, blindsides Johnahansson and takes him down. He’d sit for interference, but DoPS is likely calling him tomorrow.

Other than Justin Williams dinging one off the post, the Penguins killed the penalty with relative ease.

Underrated part of this series so far is the Penguins’ ability to, for the most part, neutralize the Capitals’ power-play.

Both teams traded power plays to end the period with the Pens having some carry-over penalty time going into the second.

Penguins would kill off the remainder of the Kessel penalty to start the second.

The period began the same way the first ended – with both teams parading to the penalty box but neither wanting to take advantage of being on the power play.

Try as they might, the Caps couldn’t solve Matt Murray.

Yes, a bouncing puck but Murray was able to get across, track the puck, and give Richards nothing to shoot at it. Just a product of being completely dialed in.

While Murray held the fort, the Penguins got themselves another counterpunch to extend the lead to three.

Schmidt with an absolutely embarrassing turnover in the defensive zone, essentially passing the puck right to Phil Kessel who saw Bonino all alone in front. Bonino’s forehand-backhand move opens up Holtby and as Bonino drifted, he got the puck to Hagelin who jammed the puck into the open net.

Pissbaby stuff by Carlson after the goal to knock down Hagelin.

I’d be pissed too if my President’s Trophy-winning season was slipping away right before my eyes, but that’s none of my business.

The Penguins were outshot, outchanced, outpossessed for 40 minutes but were up 3-0.

Survive. The Caps are coming, they’re down 3-0 with 20 minutes to go, and in jeopardy of completely surrendering any type of home-ice advantage in the series.

A 120 point season could be almost completely negated in the span of an evening.

Welcome to the Stanley Cup Playoffs.

The third period would come down to good team defense and Matt Murray continuing to stifle the Capitals.

Less than a minute in, Murr continued his big night.

The majority of the period was played in the Penguins’ end. With about 12 minutes to go, the dam finally broke. Not only that, it was a giant that had been sleeping most of the series thus far.

You knew how that was going to go.

Matt Murray is rarely going to make the highlight reel for saves and the reason is he is a positionally sound goaltender who tracks the puck exceptionally well.

No disrespect to MAF, but he relies a lot on his pure athleticism to make saves. Murray, on the other hand, keeps the puck in front of him and is often square to the shot.

With the Caps threatening and some great help from Letang, Murray keeps the advantage at 2 by tracking an unrealistic pass from Oshie to Ovechkin.

A late penalty with about five minutes to go would be killed. Murray and the penalty killers would stand up.

From the five-minute mark until essentially the final buzzer, the Caps turned it up.

Until there was about a minute left, the Penguins didn’t back down. They kept the pressure up in the defensive zone and wouldn’t let the Caps get organized.

Following an icing, the Caps would finally get some time to set up. A well-executed play and some puck luck would put them within one.

It’s all they could muster.