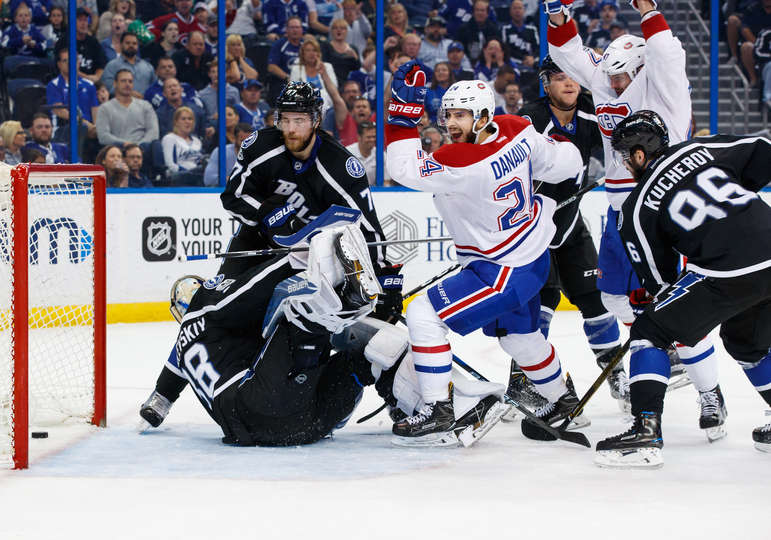 Yanni Gourde scored for the Lightning, (38-29-10), who are now four points behind the Boston Bruins for the second wild card spot with just five games remaining.

Bolts netminder Andrei Vasilevskiy was nothing short of brilliant making 34 saves and was the main reason the Lightning earned an important point.

Montreal opened the scoring at 14:24 of the second period when Phillip Danault scored his 13th of the year, assisted by Max Pacioretty (30). The Canadiens goal was a direct result of a Victor Hedman turnover.

The end of the second period saw the Lightning down 24-13 in shots on goal. Andrei Vasilevskiy was outstanding in goal making some spectacular saves to keep the deficit at one. Vasilevskiy stopped Shea Weber‘s bombs from the blue line and a bunch of in close chances from Brendan Gallagher.

The third period opened up with scoring chances galore by both teams.

Yanni Gourde tied the game with his fourth goal from Victor Hedman (52) and Jonathan Drouin (31) at 11:38. Gourde scored on a redirect of a Hedman point shot. Of Gourde’s four goals, two have been game-tying (one on a shorthanded breakaway), and an overtime game winner. He also has scored in three straight.

Montreal’s Jeff Petry scored on a slap shot above the circle but the goal was immediately waved off for goalie interference as Andreas Martinsen took Vasilevskiy’s leg out while Petry was shooting.

The Canadiens won the game in overtime as Alexander Radulov scored his 17th goal assisted by Pacioretty (31) and Danault (26) at :51. Fatigue played a factor as Kucherov missed a wide open net that sent Montreal away and Victor Hedman was spent.

The Bolts fell four points behind Boston with five to go. The Lightning have a game in hand and a head to head meeting with the Bruins on Tuesday.

Cooper said Peter Budaj will get the start in net for the on Sunday.

“We got a point out of a game that you could sit here and say they were better than us tonight.” – Coach Jon Cooper.

“We wanted to get the extra point but missed a golden opportunity.” – Victor Hedman.

“We got the right guy in the right spot with the puck on his stick. It’s too bad because it rolls on him.” –  Coach Jon Cooper on Kucherov’s OT miss.

“I don’t think we were at our best tonight… Montreal is a great team. They’re first in the division for a reason.” – Victor Hedman.

“He’s been a diamond in the rough for us down the stretch no question…His goals are getting us points.” – Coach Jon Cooper on Yanni Gourde.

“He missed. A knuckleball from him.” – Andrei Vasilevskiy on Radulov OT winner.

“Not getting a point tonight would have been devastating.” – Coach Jon Cooper.

Tampa Bay will host the Dallas Stars on Sunday at 6:00 PM in another must win game.