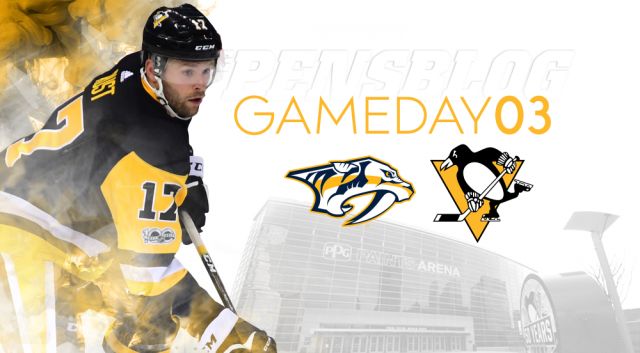 So far this season: this is fine dot jpeg dot meme.

Getting shithoused by the Blackhawks while some guy whose name rhymes with egg is arguably one of our best players feels a little too 2003ish for my liking. Maybe getting beaten 10-1 and following it up with a Stanley Cup re-match will help the Pens focus. Maybe they’ll be 0-2-1 at the end of tonight, either way we should all probably chill the fuck out (Unless Sullivan rips off his face Mission Impossible style to reveal Mike Johnston).

Tonight the Preds are back in town sporting basically the same lineup that took them to the finals last year (minus James Neal lol) along with the addition of our old friend Nick Bonino. Should be a nice tribute for Bones and his short, but memorable time in Pittsburgh. Tough to think of another Penguin who played with the team for such a short time and garnered as much love from the majority of the fanbase.

Friendly reminder that the Penguins are still the defending Stanley Cup Champions and most models and math shit favor them to get back to where we all want them to be. A little early season adversity is probably the best thing for them right now. The bottom 6 hasn’t looked great, but GMJR has some tinkering left to do before things get serious.

In the end no matter what, even if this game devolves into another shitstorm, just remember, at the very least, you’re not one of these dickheads.