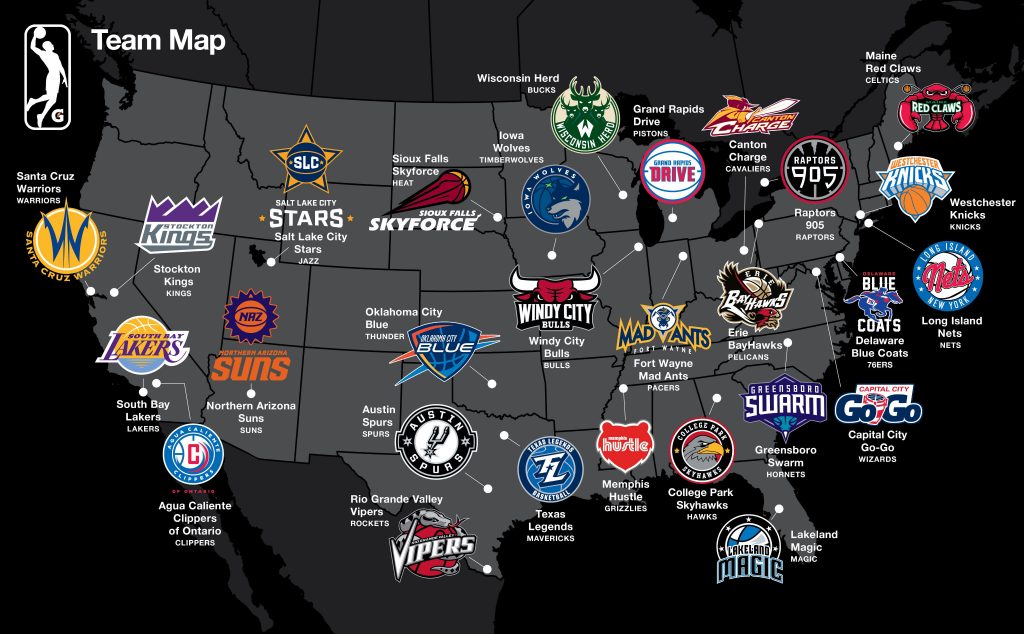 The NBA G-League is better than ever on and off the court these days, since its inception in 2001.

Highlighted by an all-time high 42 percent of players on NBA opening-day rosters having G-League experience. The G-League, formerly known as the NBA D-League also has 28 franchises (all-time high) a month into the 2019-20 regular season.

Out of 30 NBA teams, only the Denver Nuggets and Portland Trail Blazers are still without a G-League affiliate. This season, the league expanded to College Park, Georgia with rap superstar 2-Chainz involved as a part-owner of the Atlanta Hawks’ G-League team.

A couple of years ago, NBA commissioner Adam Silver told the New York Times that the G-League was actively involved in discussions to expand to Mexico City.

“Mexico is a flourishing basketball market with growing fan interest and increased youth participation,” Silver said. “We are actively engaged in discussions to establish an NBA G-League franchise in Mexico City.”

During the NBA All-Star Weekend in 2017, a team composed of the top G-League players took on the Mexican national team in NBA G-League International Challenge.

In Sept. 2019, Raúl Zárraga, president of NBA Latin America said that the league is hoping to have a Mexico City G-League franchise launched by the 2020-2021 season.

On the court, G-League rosters are built by a combination of NBA assignment players, two-way contract players, and free agents looking to get back into the league.

NBA teams have become increasingly willing to assign highly-regarded prospects to the G-League for game reps instead of having them sit at the end of a crowded NBA bench.

Two-way contracts allow players to be on an active NBA roster for 45 days, giving them the flexibility to move between the G-League and NBA. After the 45 days are complete, the player must be either signed for the remainder of the season or return to the G-League.

While NBA assignments, two-way players, and free agents will always play an important role in the G-League. A new rule came into effect for the first time this season, which has opened up the door for a new range of prospects.

G-League teams can now offer a “select contract” to elite prospects who are at least 18 years old but not yet NBA draft-eligible. A select contract pays $125,000 for one season before a player enters the NBA draft the following year.

“The supporting infrastructure surrounding these newly-created Select Contracts is designed to provide a rich offering of basketball and life skills, developmental tools for top young players to grow along their professional paths from high school to the pros,” former NBA G League President Malcolm Turner said.

With the one and done rule in effect until at least 2022, this new legislation has the potential to impact the landscape of college basketball.

However, there hasn’t been an immediate flood of high school basketball stars joining the G-League.

Instead, we’ve seen prep prospects such as LaMelo Ball and R.J. Hampton playing in Australia’s NBL through the Next Stars program this season.

Nevertheless, select contracts still have the potential to be a huge influence on the college basketball recruiting process. But the G-League will have to find new ways to recruit high school players after having little success in its first season.

One way, the G-League can market itself is through its annual winter showcase, which is a scouting event in December that is attended by all 30 NBA clubs.

The winter showcase is played in Las Vegas and features every G-League team playing games against each other. More than 60 players have been called up during or after the last 15 winter showcases per the league’s website.

This season’s winter showcase is different from earlier years as it features a new tournament format and a $100,000 prize for the tournament champion.

The G-League also implemented a new rule this season, where players now shoot one free throw instead of the standard two or three.

Coincidentally, this move has changed the pace of in-game action in the G-League. However, the rule does revert to a normal two-shot free throw in the last minute of each half.

That being said, the G-League appears to be in good shape as they head into 2020 and beyond.

With the majority of NBA franchises having affiliates and being able to stream games through various outlets, it’s a perfect time to check out everything the G-League offers.