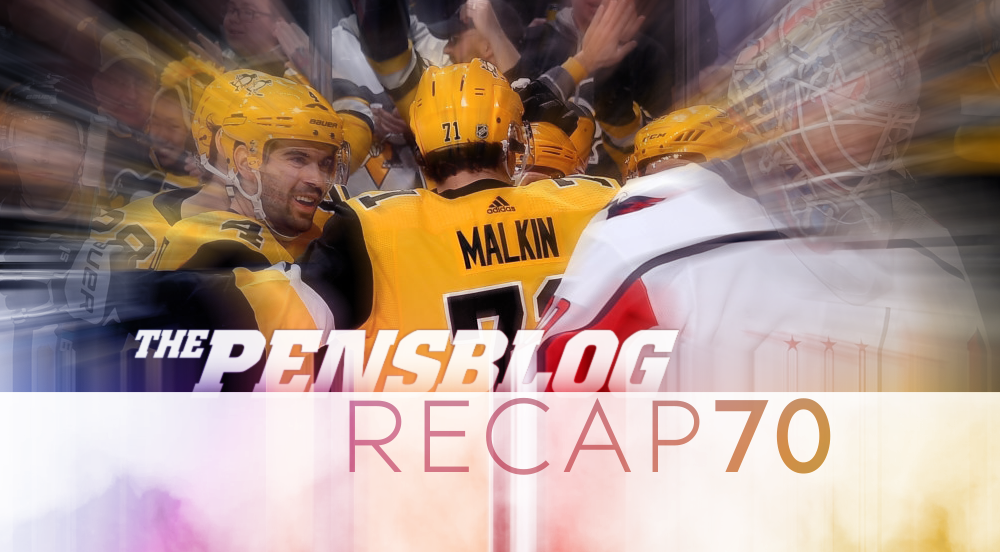 The final meeting of the regular season for the Pens and Caps and a lot of history was on the line. Evgeni Malkin was two points from 1,000 and Alex Ovechkin one away from 1,200. With a win, the Pens could put themselves four points behind the Caps for the division lead.  You can claim your free bet on the match from OLBG’s list of sign up offers which is a great way to earn money by betting on the Pens.

It was announced ZAR was out day-to-day with a lower body injury, so Joseph Blandisi slotted in on fourth line, sliding Teddy Blueger up to the Geno-Kessel line.

Tom Wilson, caught by Jason Mackey in the PPG Paints Arena bathrooms collecting some of the finest piss, told him he doesn’t expect Pens fans to like him.

Pengs came out of the gate with a purpose, getting 9 of the first 13 shots and controlling the play. This even with Jake Guentzel taking a holding penalty against Ovechkin just 50 seconds into the game.

During said PK, Jack Johnson came barreling into Matt Murray, the man in the middle of making a spectacular save, almost causing the puck to go into his own net. Or as Bob Errey called it, “helping his goaltender.”

The Pens would kill it off and get to work, but at about the 10 minute mark, the Caps took over and wouldn’t let go for quite awhile, but we’ll get to that.

A putrid Jack Johnson (unforced) turnover would lead to a tremendous amount of pressure from the Caps, culminating with what might have been Justin Schultz’s best defensive play of the season.

Tough night for the “Johnson’s been better lately” crowd, of which I am one so I can say that! An unforced turnover, beaten to the puck and then let’s the Caps set up in the zone. Great save by Murr on Oshie to start, but again, JJ73, chases a hit, opens the slot, leaving Schultz all alone and allows Carlson to back off to make himself an option back door. All round, yikes.

After banging at the door the second half of the period, the Caps would finally kick it down with 36 seconds remaining…

First and foremost – props. Unreal shot by Vrana on a rolling puck to snipe that top shelf while drifting to the boards. Call it when you see it.

Secondly, and I have to do it to him, but what in the name the father, the son and Space Ghost is Johnson doing here? He fixates on the puck like he’s playing mite league. Keep Oshie from cutting directly to the net, keep Vrana to the outside and position your stick thusly. Instead, he half commits to both, and then opens up just enough of a shooting lane for Vrana. Woof.

Caps held 66% of the shot attempt share at evens in the first period, but trailed in HDCF 4-2. Not that you’d know it from the way the period ended.

Pens would be given an early power play as Ovi got a stick up high on Hornqvist, but…well, it was bad. Let’s leave it there.

One of the better chances of the period came from Teddy Blueger. Coming off the bench following a great zone entry by Sid, Teddy finds his way to the soft spot of the zone and changes the angle on Holtby. Good save, but a promising sign for the kid.

You know how just before you’re about to go on a diet or dry out from boozing for a couple weeks you decide to have one last hurrah? You definitely get that 20 piece McNugget from McDonald’s or have that 12 pack of All Day because damn it, it starts tomorrow.

Well, that’s what the Caps second goal was for the Pens. They were just about to get back into the gym and decided this goal would be their last lazy day.

The coverage through the neutral zone, not horrible. Closing Vrana off on the wall, also not horrible. The shot? Awful. The response from Murr? Finishing that 12th All Day and vomiting all over yourself because you knew good and goddamn well you didn’t need it, but you drank it anyway.

Did you think it was over once the Caps went up 2-0? Yeah, you did. Jake Guentzel and Jared McCann had other plans, Jack.

Evgeni Kuznetzov, who I think retired after scoring the series winner last spring, lazily skates toward his defensive blue line and Jared McCann picks his pocket, he waits, overpowers Brooks Orpik, notices Jensen can’t catch Jake and after a nice dish, Money makes no mistake. 35 on the year for ya boy.

Oh, wow, the Pens put one on the board, how nice. Well, 13 seconds later, the average time it takes most Americans to go to the bathroom, Run the Jultz and Sidney Crosby were about to take the World Heavyweight Tag Team Belt back and tie this mofackle up.

Listen, I’m not saying the Pens should cool it on these area flips, but if the eastern conference gets wise to it, how are we gonna keep Columbus from winning their first playoff series in franchise history?….hang on, I’m being told they’re probably missing the playoffs. How sad.

Unreal flip by RTJ and a bizarre defense by Holtby. You were gonna….cross check Sid? Odd boast, but alas.

What a good coach does after giving up consecutive goals to your most heated rival, in their barn in 13 seconds: call timeout.

What a coach that studied under the tutelage of Dan Bylsma does after giving up consecutive goals to your most heated rival, in their barn in 13 seconds: not call timeout.

With the Pens circling and the Caps on the ropes, Backstrom would trip up Geno and it was to the power play. Now, no one would blame you if thought that was one sure fire way to kill all this momentum, but Mike Sullivan, a veteran of two Stanley Cup championships, put all the gunners out and it was showtime.

What puck movement. Phil and Gene team up for a clean zone entry, Geno bullies his way to the middle, works it down low to Phil! and 87…looming out of sight, sneaks in the back door and you know the best in the world ain’t missing from there.

Aside from Burakovsky hitting a post, we wouldn’t see much more, but in 1:47 the Pens went from looking dead and disinterested to leading this game. Unreal.

The stats showed it, too. Caps held 58% of the shot share and still trailed 7-5 in HDCF. Point being – the Pens made it count when they needed to.

The Caps and Pens would trade chances to open up the third, but to no avail. Heroic performances by both Murray and Holtby. The Caps, despite being a deeper squad, are similar to the Penguins – as their goaltender goes, so do they.

At one point Wilson and Gudbranson would grunt at one another and go to the box. No, Jason, I still don’t like the trade.

With Ovechkin in the box to serve a too many men on the ice penalty, it was time.

Malkin worked the puck to Run the Jultz, RTJ’s shot would rebound right to Phil! and that was 1,000 points for the Russian Bear.

Kessel on Malkin: "He's a world-class player. Obviously he's a big guy. He has good skills. He sees the game well, shoots the puck well. I guess when you do everything good, it's easy." pic.twitter.com/QsqUYszufO

Any time someone tells you there is a rift involving Phil Kessel, show them this video and then kick them right in the taint.

Just a few minutes later, it was the Caps turn. Simon in the box for Too Much Man and you just knew it was coming.

Opposite end of the ice, same play. Half wall to the point, shot for a rebound and a guy there to clean it up.

With the Caps gaining some momentum, they’d opt to pull Holtby with 2:00 left. Too bad, so sad. Jared McCann with the curtain call.

Underrated part of this goal: McCann dips his shoulder giving off the impression he’s going to pass to Hornqvist for the zone exit. This buys him just enough time to toss it to the empty net.