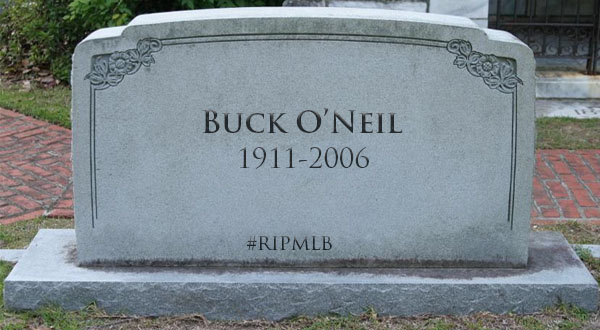 At the bottom of Buck O’Neil’s magnificent gravestone, you can find this inscription: “If I’m a Hall of Famer to you, that’s all right with me. Just keep loving old Buck. Don’t weep for Buck. No, man, be happy, be thankful!”

That may be the most Buck O’Neil statement possible. No bitterness for a life that could have been. No anger about a well-deserved honor that somehow eluded him in life. Just gratitude for the life he had and the love he experienced from generations of baseball fans.

O’Neil was a star first baseman in the Negro Leagues and went on to become one of the greatest caretakers and story-tellers from that era of the game. Well into his 70s and 80s, he spoke and wrote about its legacy and was instrumental in getting many Negro Leaguers inducted into the Baseball Hall of Fame.

In 1996, he published a wonderful memoir, I Was Right on Time, which told his story of growing up picking celery in Florida to his life as a baseball player. Officially, he played for the Memphis Red Sox of the Negro American League in 1937 and the famed Kansas City Monarchs from 1938-43 and 1946-49, batting .283 with 7 home runs and 99 RBI in 766 games, but that hardly does justice to the career he had.

Negro League players frequently barnstormed across North America, playing games wherever they could and against opponents of all types. O’Neil played against many Major Leaguers in these games…just never in the Major Leagues due to segregation. He played in three Negro League All-Star Games at Comiskey Park in Chicago and two World Series.

As a Monarch, he was teammates with stars like Satchel Paige and Hilton Smith. O’Neil later acted as the Monarchs manager and had the distinction of running a co-ed team, once the team acquired infielder Toni Stone from the Indianapolis Clowns.

By the time Jackie Robinson had busted the color line in baseball, O’Neil was past his prime as a player. He did make it to the big though, as a coach for the Chicago Cubs in 1962 — the first African-American coach in Major League Baseball. He was also a scout for the Cubs and Royals and discovered several star players, including Lou Brock, Lee Smith and Joe Carter.

Late in life, O’Neil got recognition through Ken Burns’ acclaimed “Baseball” documentary. He was tasked with telling the history of the Negro Leagues and life as a black ballplayer in the 1940s and ’50s. He became the breakout star of the series and was invited to speak across the country. For 20 years, Buck O’Neil was on the Baseball Hall of Fame’s Veterans Committee, which inducts players from baseball’s past eras. During his tenure, the Committee recognized many greats from the Negro Leagues, bringing players like Leon Day and Smokey Joe Williams to Cooperstown. Day received word he was inducted into the Hall of Fame just six days before his death in 1995.

In 2006, the Veterans Committee inducted 17 players and executives from the Negro Leagues into the Hall of Fame, unofficially closing the chapter on the Negro Leagues. Shockingly, O’Neil didn’t get elected. By his own admission, he didn’t qualify as a player — though he was being a little too humble about that. But for his contributions to baseball and his efforts in preserving the history of the Negro Leagues, he surely deserved election. He may get his due someday.

The Hall seems to re-configure the Era Committees on a regular basis, so it is possible that O’Neil’s name may yet show up on a ballot. Buck O’Neil died on October 4, 2006 at the age of 94. He’s buried in Forest Hill Cemetery in Kansas City, Missouri, along with his friend Paige. His gravestone, located close to the cemetery’s main office, was a gift of the Negro League Baseball Museum in Kansas City. It’s an amazing museum and is a must-visit for any baseball fan. O’Neil pushed for its creation and was on the board of directors until his death — just one more way he helped keep the memory of the Negro Leagues alive.