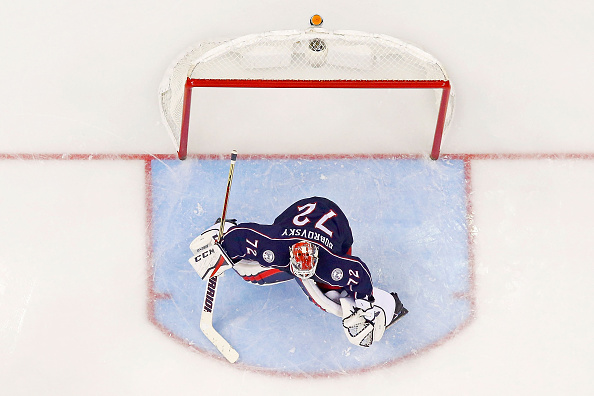 When discussing the Columbus Blue Jackets season thus far, you could describe it as a roller coaster of percentages. Either their shooting percentage goes nuts or Sergei Bobrovsky bails them out. Getting in a knock down, drag out fight hasn’t been their style thus far. Playing against a talented Washington Capitals team Tuesday night, they had to work their way back to find a way to win. The Jackets ended the game in overtime 2-1 with a Cam Atkinson goal, where exactly did the team excel tonight?

Here is another angle of the Atkinson goal. What a rocket. Overtime winner. #CBJ pic.twitter.com/FVKPidgroi

After Werenski scored (a goal we will discuss later on) the Capitals came right back and pushed the Blue Jackets, by scoring what looked like a gritty, ridiculous goal.

Backstrom scores a goal that is now being reviewed for offside. 2-1… for now #CBJ pic.twitter.com/l4xx38bQCG

It was rough and tumble down by the crease, it looked as if goalie interference may have taken place, but it would be tough to prove that considering the mess down there. One person though was looking at a completely different moment in this sequence, it was Blue Jackets video coach Dan Singleton. Singleton has stuck with the team despite all of the coaching changes and front office changes, he is now rewarding people’s loyalty to him by flipping some reviews on their head.

Here is the offsides that was reviewed and ended up overturning the Backstrom goal. 1-1. #CBJ pic.twitter.com/UqTiOTt5gf

As you can see in the gif above, Oshie is clearly in the zone while the puck is still on the blue line. Tortorella joked that Singleton needed a raise but if he keeps making deft decisions like this in a moments notice, they’ll need to take that passing request seriously.

Better: Battling back against a solid club

The elephant in the room for the better part of the season has been the PDO wave the Jackets had been riding as of late. The Jackets can’t always shoot at a ridiculously high percentage all of the time, it is clearly not sustainable. While it is nice to win games 10-0 and 8-4, a lot more games are going to be more like last night.

Columbus was losing the possession battle most of the evening until a little bit of score effects took place and the Jackets started to bombard the Capitals. They ended up putting up a total of 20 shots during this frame, the Capitals finally broke and it made Tortorella’s “identity win” that much sweeter.

The site may already be sounding like a broken record at this point but Zach Werenski is very, very, very, very good. It didn’t take a genius to know he would do well this year, nobody expected this kind of performance though. He led both teams in even strength CF% and ended up second in total ice time on the team. He is playing a bunch of minutes and doing it efficiently.

Werenski with his fifth goal of the year. What a goal, what a celebration. 1-1… for now #CBJ pic.twitter.com/kr732j0Mnx

Up to this point, Werenski wasn’t really taking over games, he was an impact player but this game was his coming out moment in that regard. He was skating all over the ice and making sure that the game was going to be decided on his stick. That kind of confidence doesn’t come around very often, especially in a 19 year old (unless they are talking about their beer chugging abilities, at that point, there is no one more confident). This game could end up being a rallying point for the season.

Cam Atkinson is the Darren Sproles of the #CBJ. #ShortAndSneaky