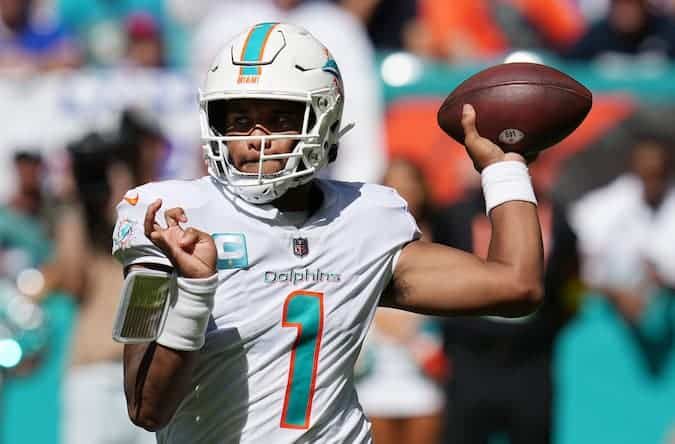 It looks like Miami Dolphins will have Tua Tagovailoa in their lineup when they take on the Cincinnati Bengals at Paycor Stadium on Thursday night.

Tagavailoa was listed as questionable in the final injury report of the week, but NFL Network reporter Tom Pelissero reported early Thursday morning that all indications point to Tagovailoa being available to play – barring any other setbacks.

#Dolphins QB Tua Tagovailoa — listed as questionable with back and ankle issues — is expected to play tonight against the #Bengals, barring a setback, per sources.

WR Jaylen Waddle (groin) and LT Terron Armstead (toe) should be good to go, too.

Tagavailoa sustained injuries to his back and ankle during the Dolphins’ closely battled win against the Buffalo Bills at Hard Rock Stadium on Sunday, missing the final few plays of the first half.

The 24-year-old’s health has been subject to plenty of controversey since Sunday, as the QB appeared to suffer a head injury after getting bumped by Buffalo Bills linebacker Matt Milano during Miami’s win. Tua was stumbling on the field after the hit, causing many to believe he was concussed. The NFLPA said following the fame that they would review whether the Dolphins followed the concussion protocol, but the team has said it was a back issue.

The Dolphins are one of just two remaining undefeated teams in the NFL, and it’s been partly down to the performances of their star quarterback.