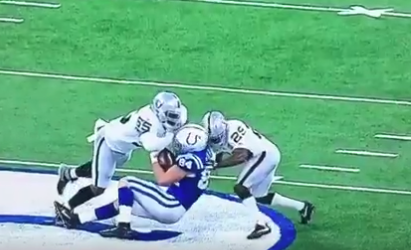 It didn’t take long for the *real* Vontaze Burfict to show up this season.

The much maligned linebacker signed with the Raiders in the offseason, having a history of putting cheap shots on opposing players — a reputation that he has yet to shake.

And while he’s claimed to have cleaned up his act, actions speak louder than words, and it appears that isn’t the case yet, judging by what he did during Sunday’s game against the Colts.

It happened during the second quarter, when Colts tight end Jack Doyle caught a pass over the middle. Doyle was going down to the ground, when Burfict came flying in late — leading with his helmet — and absolutely drilled the Colts tight end in the head.

Burfict was ejected from the game, and understandably so.

#Raiders LB Vontaze Burfict has been ejected for lowering his helmet to initiate contact pic.twitter.com/R8GHiJI6NF

He can expect a fine from the league as well for that dirty late hit.