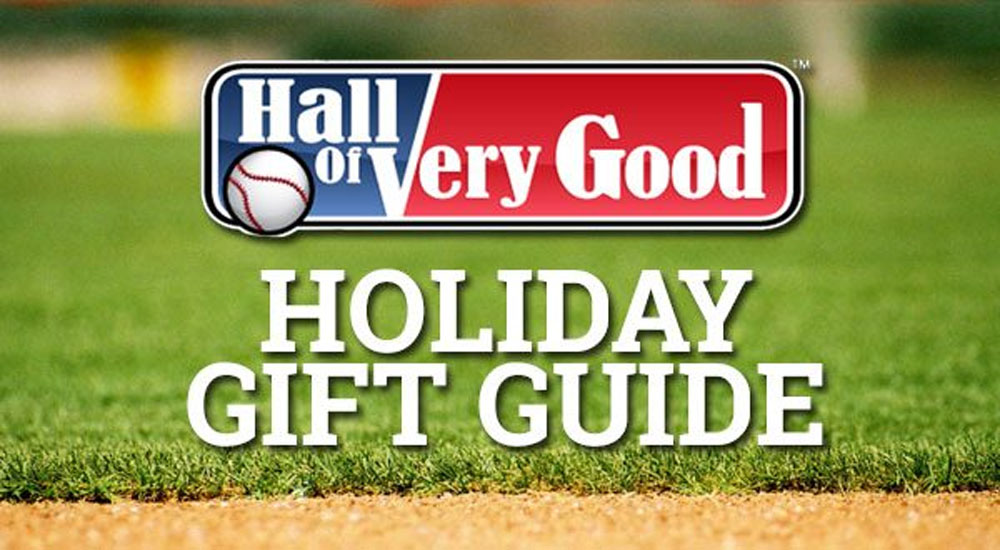 We’re less than a month away from Christmas and while you’re waiting, no doubt, to see if Bryce Harper and Manny Machado (or both, Philadelphia fans?) will end up in your favorite team’s stocking…you still have some shopping to do.

Does the baseball fan on your list know how to read? Do they wear clothes?! Both good questions.

Regardless of team affiliation (and any sort of affinity toward words)…here are some last-minute gift ideas any self-respecting fan would love.

ANYTHING from Team Brown Apparel – The coolest thing about Team Brown Apparel’s extensive line of shirts, hats and what not is their unprecedented affiliation with both the Negro Leagues and the AAGPBL. Even better is their support of The HOVG Podcast. Use promo code HOVG at checkout and get 25% off your purchase.

Stance Socks – The self-proclaimed “founding father” of socks. If you’re not wearing the official sock of the MLB, you’re missing out.

Naming Wrongs T-shirts – Do you still call it Comiskey? How about Shea?! If so, these shirts are for you…literally! Also, they’re just cool, hip contrarian threads to wear.

American Needle Ball Caps – Some of the finest baseball caps anywhere come from American Needle. And, sure, it’s not baseball-related…but if anyone wants to buy me that Hartford Whalers lid I’ve had my eye on, I can send you my information.

Hanks Kerchiefs – The finest high-end handkerchief money can buy or just a ploy to get San Francisco Giants fan Colin Hanks on the podcast? Can it be both?!

Rocket City Trash Pandas Gear – They won’t take the field until 2020, but the Trash Pandas are (pretty much) already guaranteed to be the hottest new thing.

Winning Ugly: A Visual History of the Most Bizarre Baseball Uniforms Ever Worn by Todd Radom – Two-time HOVG Podcast guest has gone from designing logos to writing books. Winning Ugly takes a deep dive at the best and the worst (but mostly the worst) uniforms in the history of Major League Baseball.

The Big Fella: Babe Ruth and the World He Created by Jane Leavy – Think you know everything there is to know about George Herman “Babe” Ruth? Think again.

Gator: My Life in Pinstripes by Ron Guidry – Ron Guidry spent fourteen years in New York as one of the most underrated Yankees of the era. Gator is a straightforward account of the pitcher’s years in The Bronx Zoo.

Walls of Fame: The Unforgettable Sports Posters of the Costacos Brothers by John Costacos – Along with his brother Tock, John Costacos decorated the walls of sports fans everywhere with their posters. Walls of Fame provides the stories behind the posters. For example…those were Walter Payton’s own guns in that famed Chicago Vice poster. True story.

Springfield Confidential: Jokes, Secrets, and Outright Lies from a Lifetime Writing for The Simpsons by Mike Reiss – A book about the making of “The Simpsons”? Yes, please.

Football for a Buck: The Crazy Rise and Crazier Demise of the USFL by Jeff Pearlman – No…this is not a baseball book. Yes…it is an absolute must read.

Out of the Park Baseball 19 – Still, hands down, the best baseball strategy game ever made. Ever.

Major League Baseball: 2018 World Series Boston Red Sox vs Los Angeles Dodgers – Four World Series rings in fourteen years? I think it’s pretty safe to say the curse is over.  And, yeah, you’re going to want to relive the thing over and over. Lucky for you…this Blu-ray exists!

Boston Red Sox Fenway Park BRXLZ Stadium [FOCO.com] – Dear Santa…I have no idea what I would ever do with this thing, but, man, it sure would look cool in my office.

Lastly, if you’re into baseball art at all, our friends from Gummy Arts, Gypsy Oak, Ballpark Blueprints, Prinstant Replays and Baseball Card Vandals continue to not disappoint. I can guarantee that you will be more than happy with whatever you find there.