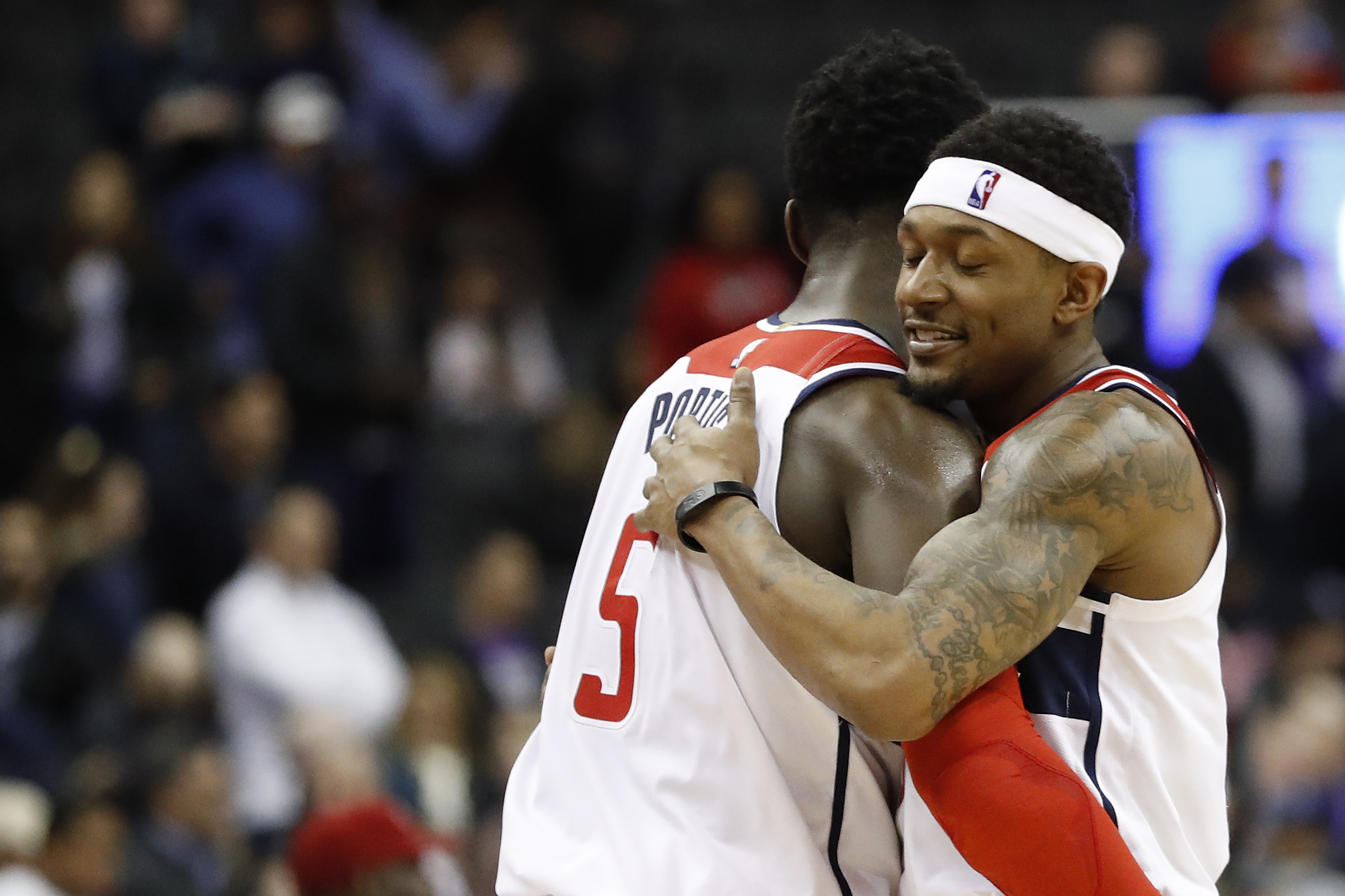 The Washington Wizards face poor odds to make the postseason as they entered their final 16 games of the regular season as the No. 11 seed in the Eastern Conference, four games back of the playoff picture. With the Los Angeles Lakers in a similar position and opting to limit LeBron James’ minutes, it would make sense if the Wizards decided to reign in the NBA’s playing time leader, Bradley Beal. Scott Brooks dismissed such an idea at this time with Washington still having a shot at the playoff, albeit bleak. With the start of a five-game homestand, the Wizards got off on the right foot, from a non-tanking perspective, by taking care of the Sacramento Kings, 121-115, who are also fighting for their playoff lives.

If you just looked at the box score, it would not surprise you that Beal was the game’s leading scorer with 27 points. What may shock you is that the All-Star had just six points on 2-of-8 shooting in the first half. A couple years ago, Beal admits he may have sulked and had a bad game in total. With his required growth as a leader in John Wall’s absence dating back to last season, the shooting guard has matured. As a result, Beal scored 21 points on 7-of-11 shooting after intermission to give his team the victory. His four steals to go along with nine rebounds and nine assists were especially impressive as the Wizards held the Kings to six points in just under a five-minute span late in the fourth quarter.

Bradley Beal cites his growing maturity for how he was able to rebound from a six-point first half to exploding for 21 points in the second half: "No matter what it takes." pic.twitter.com/dDZnzgJrlZ

Washington got strong efforts from their two true point guards: Tomas Satoransky and Chasson Randle. With Beal struggling early, Satoransky shouldered the load with nine points in eight first quarter minutes. The soon to be restricted free agent was a perfect 3-of-3 from the field with three three-point plays, one the old fashioned way. Despite drawing the first technical foul of his NBA career for lasering the ball into the stanchion in frustration, Satoransky had a productive game with 17 points, seven assists, six rebounds, and two steals.

That Tomas Satoransky gets a T for showing emotion and being mad at himself is stupid pic.twitter.com/8oXBsVpq5C

Backing him up was Randle who received rotation minutes for the first time since March 1 after three straight DNP-CDs. Facing the speedy De’Aaron Fox and Yogi Ferrell, Randle’s number was called over Sam Dekker’s and the point guard made the most of it. Brooks credited the 26-year old for true professionalism, not surprising given his kind personality, when not receiving playing time. The Go-Go callup had 12 points on 4-of-6 shooting including 2-of-4 from three in 15 minutes off the bench. Most impressive were his three steals, two of which directly turned into layups. Most NBA players do not pick up 94 feet, but Randle is not most players, which Brooks gushes over.

“We just got to keep moving things around and you got to play your minutes hard and play them well and you got to produce every night.” Brooks began. “And it was his turn to get an opportunity. I like his professionalism. He stays ready. He doesn’t say a word. He just competes, practice and shootarounds. His time was gonna come. I reward guys who do things that way and do it the right way. I’m glad he came in and gave us really, really good minutes on both paths.”

The Wizards continue to get good production out of the pair of 23-year olds they received in dealing Otto Porter. Jabari Parker continues to flash the athleticism that made him the No. 2 overall pick four years ago. His 18 points on 7-of-13 shooting including 3-of-5 from deep is the perfect aggressive offensive power the Wizards need on their second unit. Bobby Portis had 17 points on 50 percent shooting from the field, but more importantly, grabbed 13 rebounds and caused three turnovers. Washington would probably be happy with zero points from Portis, as long as he is not chucking up double-digit shots, if he is recording 13 boards every game. In line with how Beal sought out Parker to be more aggressive, Portis is raving about the former’s leadership skills. That Wall and Beal were not good leaders was the popular headline about Washington the past couple seasons, but it is clear more than ever to those that actually cover the team that at 25-years old, Beal has blossomed into a superb No. 1.

Entering Monday night’s action, Washington was tied with Dallas for the sixth worst record in the NBA. A few hours later and they only have the eight worst record and are 3.5 games back of the No. 8 seed. Should they somehow make the playoffs, as they desire to, they would get the 15th overall pick in the 2019 draft instead of a 1-in-3 chance at a top-four pick. Even those within the organization agree that it hurts the team long-term, but with a little extra cash from home playoff games and more importantly jobs on the line (wink wink), the Wizards are still hoping to extend their season beyond April 9.

Hall of Very Good 59m ago