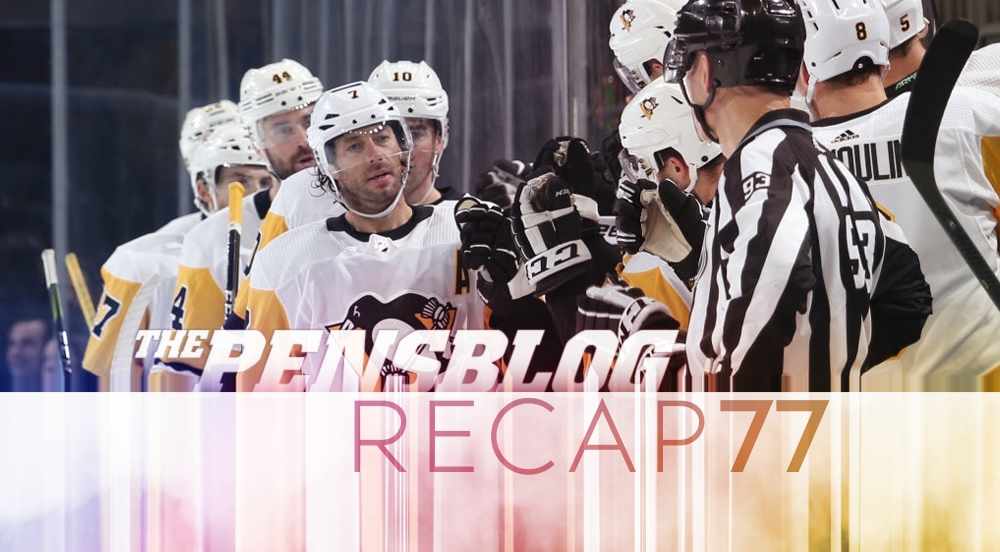 Don’t look now, but the Penguins are in striking distance of a division title, the participation trophy of the NHL season.

It’s impressive, too, considering that feat was previously thought to be impossible when the Penguins season ended on a rainy night in Philadelphia.

siri, show me the most perfect human being pic.twitter.com/bI3IjyRWiO

Even more impressive than that is the Penguins are on yet another 3 game win streak, having gone 3-0-1 on this 4 game road trip.  They’ve had to play the last 5 without Malkin (3-0-2) and had to do it last night sans Malkin and Letang.

But when they needed it the most, the depth scoring showed up.  So too did Matt Murray (again).

Take depth goals and 33 saves and you mix them up in a pot
Sprinkle a little PP goal on top, and what the fuck do you got?
You got the realest and illest killers winning 3 straight.

And if the Penguins are hitting their stride up and down the lineup at this stage of the season, that should be worrying for 7 other teams in the conference.

Zach Trotman slots in for Kris Letang in a pairing with Brian Dumoulin. pic.twitter.com/tBJKVDBAeu

HCMS was forced to make one lineup change to his team that supernova’d the Stars on Saturday night, bringing Trot Zachman back into the fray with Letang out day-to-day with an upper body injury.  Murr got his 15th start in the last 16, opposite of Alex George.

Pens controlling the puck in the early stages as they should against a tanking team.  Jultz had his skating legs going, but through the first 7 minutes of the period, each team only levied 2 shots on goal.

But despite some early control through the first 5 minutes from the Pens, it was the Rags who ended up owning most of the first period when they opened the scoring coming off a long shift from the Guentzel-Crosby-Rust line.

In what started as a pretty innocuous play where the Pens top line was running the show down low, Brendan Lemieux popped out to put Jultz under duress after Crosby held the puck in at the point while Jack Johnson hung out in his own end of the ice.

The 50/50 puck between Jultz and Lemieux jumped up and as they both gave chase, Lemieux absolute dummies Schultz to hold him off and protect the puck for Zibenjad to jump in and take it up the gut.  You can see just how gassed Guentzel is here when Zibanejad grabs it and the Rangers are off on a 3v2, putting Schultz through the spin cycle and rendering Johnson obsolete.

Still can’t quite process or understand why Johnson wasn’t in the offensive zone contributing here.  A lot went wrong on the play and, admittedly, Buchnevich flies the zone and all, but there is no one at the left point to even try to make a play on the puck when it goes into orbit off Schultz’ and Lemieux’s sticks.  Schultz has to do better here, as does Jake, but Johnson is ineffective here by sitting back inside his own zone and letting Buchnevich and Zibanejad hit the line with speed and impunity as he just watches them pass the puck.  Just a full breakdown all around from everyone on the ice.

A few minutes later, Claude Lemieux’s dickhead kid clamped down on Pettersson’s stick to earn a hooking penalty and put the Rangers on the first PP of the night.

And from there, you just knew they were going to score.  Pens were caught chasing the puck on the kill, left passing lanes open and DeAngelo punished them, hitting Lettieri with a cross-ice feed for a bullet of a one-timer.

But right off the opening faceoff and before the PA announcer could even call Vinni Lettieri’s name, the Penguins were level.

First, Pettersson does a fantastic job to win the race to the Rangers rimmer for Bjugstad to clean up and send Simon and Hornqvist off to the races.  Simon’s dump was handled by Georgiev with the style and grace of a dying giraffe on acid, setting the puck up for Pionk to get absolutely hammered by Hornqvist and Bjugstad.

Those two dug it out for Simon to wheel out and hit MP28 at the point for a shot through traffic that Georgiev, doing his best MAF impressive, kicked right out to Bjugstad in front for the squeaker.

That goal gave the Pens some life as they started pouring it on late, but weren’t able to beat George on any of the zillion good looks from Schultz, Rust, or Guentzel.

Pens ended the period with 13 shots on goal at 5v5, with the Rangers generating 14.  Even 18-18 split in unblocked attempts, 22-20 Rangers in shot attempts, but it was the scoring chance generation where the Penguins thrived, going 11-4 (5-1 high danger).

Just 27 seconds into the period, the Pens got their chance to even shit up after Skjei went off for high sticking Crosby in the offensive zone.

Following a chance where Hornqvist was a matter of inches from tapping one in from his home, 87 won the following draw and Phil! went to work.

For as good as Sid is at drawing a crowd, Phil! makes this whole thing happen.  His quick reset to Schultz at the point after pulling two Rangers to him in the corner was one thing, but as he worked his way up to Jultz to support him, his quick touch pass to Hornqvist at the top of the circle was the killing blow.

Once Crosby gets the puck below the goal line, all bets are off.  He and Phil! play a little catch before 87 walks to his wheelhouse behind the net.

All 4 NYR penalty killers are dialed in on him, giving him an avenue right down 8th Ave. to hit RTJ in the high slot for a howitzer.

On Crosby’s next shift, he put DeAngelo through the ringer down low.  If anyone ever finds a player that’s capable of defending Crosby consistently below the goal line, they’d be the richest scout to ever scout.

not even sure why teams try to defend crosby below the goal line anymore pic.twitter.com/ElV1b298rV

That shift from Crosby was followed up by a Big Boy Hockey Shift from the Pens 4th line, who were able to hang Dad Dong on the Rangers below the goal line.  Cullen forced the turnover, Wilson walked out of the corner and reversed it back to Cullen for the Dad Snip.

About two minutes later, Claude Lemieux’s kid bought another penalty, this time on Jack Johnson.  They’d kill it off, but then go right back to the kill after Hornqvist caught Chytil with a high stick.

The Rangers never really looked threatening on it and, midway through, were dealt their killer blow from the stick of Teddy Blueger.

Again, it was the Pens scoring by virtue of being able to deal with a hard-around.  This time, it was Dumoulin handling it, taking a hit to make the play over to Pettersson, who also took a hit to make the play of chipping the puck out.  Got a fortunate little bounce over Shittenkirk’s twig, but ain’t no one on the ice catching Blueger here.

The kid was gone, got hooked up along the way and still nearly found Rust on the backdoor, but credit Blueger for sticking with it and being in the right place to take Rust’s desperation feed behind the net and banging it home on the backhand.  Give the Pens 12 shorties on the year, 3rd most in the league.

when the pens arent the team giving up shorthanded goals pic.twitter.com/zcFbpPX8Pp

Pens got a late PP opportunity to give the Rangers a chance to shove my tweet back down my throat, had some chances, but Murr and Co. turned them aside to get to the 3rd period up 2 after a dominant middle frame.

For the first half of the period, the Rangers were on the receiving end of the Penguins shutting this shit right down, who limited the Blue Shirts to just 4 shots on goal in the opening 10 minutes of the 3rd.  Score effects changed that late, but not until it was a 3 goal game.

Give credit to Gudbranson here on the play, who, despite having to deal with a 4v2 on the rush, maintained great positioning and a really good gap to thwart Chytil’s center drive.  Pettersson was there to pick up the pieces and outlet it to Phil! to head in ona 2v2 with Blueger.

Really heady play from Phil! here to loop way wide and pull the defenseman with him to open up a cross-ice lane to McCann coming late for the quick shot that Georgiev couldn’t handle.

Blueger city on the doorstep.

And that’d be that to finish this game off and take the win streak to 3.

Pens finish up this week after a 3 day break, hosting the Preds on Friday and the Canes on Sunday evening.  Depending on how things shake out today and Thursday with the Islanders (at CBJ, at WPG), and Caps (home-and-home with the Canes), the division may be the Pens for the taking come Friday.  Do it.  Go Pens.