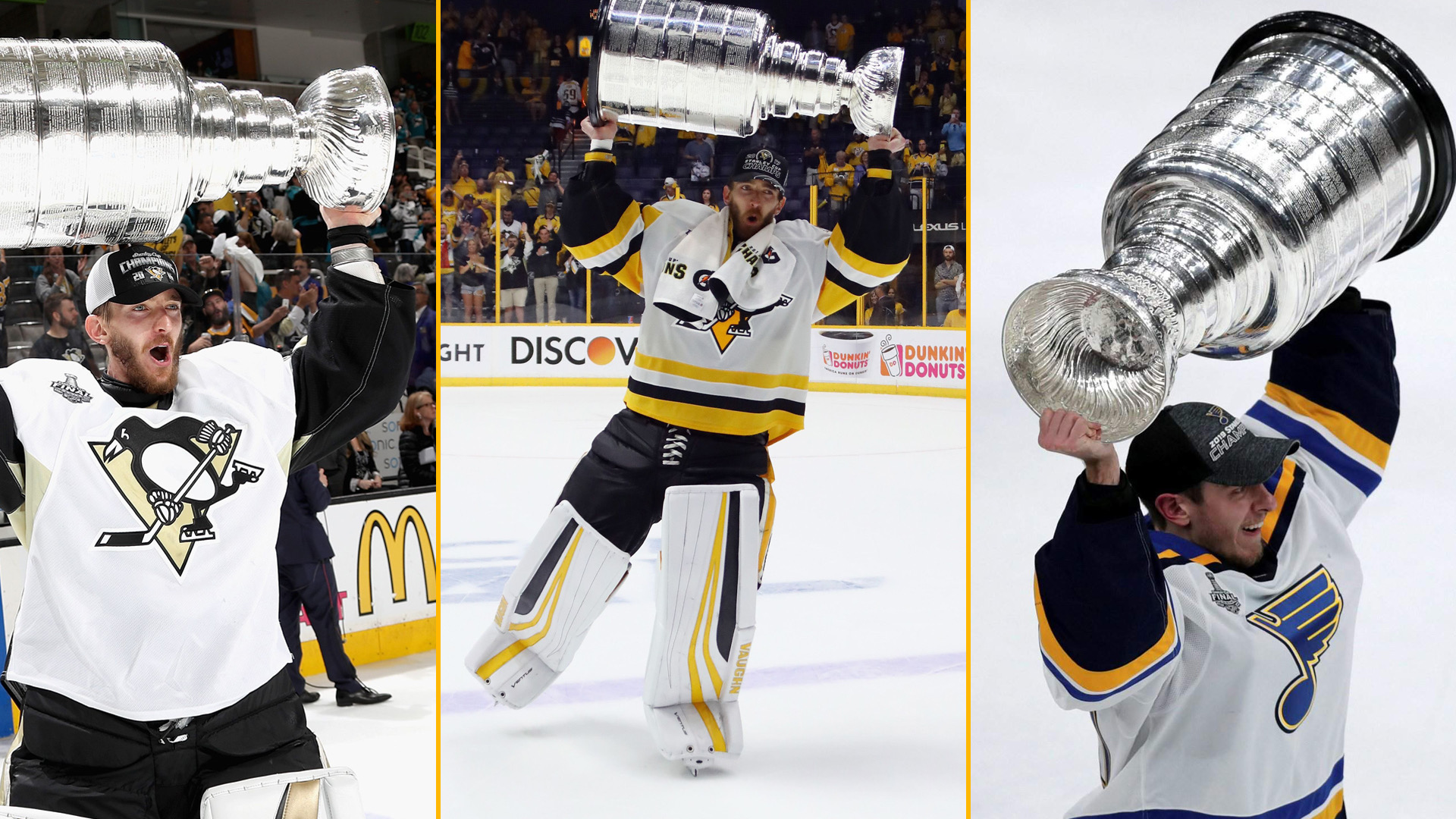 Stop me if you’ve heard this before:

An NHL team was floundering midseason, made a coaching change, brought up a rookie goalie, and ran roughshod over the rest of the league en route to a Stanley Cup victory.

With last night’s 4-1 Game 7 win in Boston, Jordan Binnington etched his name onto the Cup and into the history books alongside Matt Murray (as well as Cam Ward, Patrick Roy, and Ken Dryden) as just the 5th rookie goaltender since 1968 to win a Cup clinching game, which Murray technically did twice.

Binnington, though, won all 16 games during his run compared to that of 15 and 7 in Murray’s first two postseasons, while Murr posted a shutout in the series-clinching Game 6 (and Game 5, for that matter) in 2017, a feat Binnington was a mere 2:10 away from last night.

Still, the parallels between the two netminders are present and apparent, so I wanted to take a look at the three runs and see how they stacked up against one another amid the calls for Binnington to win the Conn Smythe last night.

First, let’s start by looking at the basic numbers before jumping into the advanced stuff:

One thing that stands out is just how good Murray’s numbers were in the 11 game/10 start sprint in 2017, pitching a shutout in nearly half of his wins, including the aforementioned Games 5 and 6 in the Final.

All this, too, in the face of calls to throw Fleury back in after the Game 4 loss in Nashville.

But when we dive into breaking these down, we really see how impressive Murray was during both Cup campaigns.

First, let’s look at the workload these guys faced at all strengths at at 5-on-5.

What stands out is that, in terms of shots faced per hour of ice time, Binnington had a marginally harder workload, facing slightly more shots and high danger shots against at 5v5 and in all situations.  That should come as no surprise for the 2017 Penguins, whose commitment to team defense while lacking Kris Letang was felt and quantifiable.

Even still, in terms of what the Blues gave up against Binnington, it’s pretty comparable to what Murray faced in 2016.  The difference, of course, came in the form of the percentages of those shots each stopped.

But goalies are judged by not just the percentage of shots that they stop, a category owned by by Murray at 5-on-5 and at all strengths compared to Binnington in both 2016 and 2017 (aside from Murray’s outlying HDSV% in 2017), but also by the amount of goals they allow.

The exceptions here being that Murray posted a marginally higher 5v5 goals against rate in 2016 and giving up just under 0.3 more high danger goals against per hour in 2017 than Binnington, a trend we saw earlier this season when the Penguins were giving up an inordinate amount of high danger looks against Murray.

Still, at all strengths you can see that Binnington gave up roughly about as many goals as expected per hour of play.  It was, however, his 5v5 play that was much better than expected.

Similarly, Murray saw around 0.3 fewer actual goals versus expected at all strengths and at 5v5, even with his much higher rate of high danger goals allowed per hour of 5v5 play.

And if you were to put an arbitrary, league average goaltender between the pipes behind these two teams, Murray by and large performed above that average in terms of goals saved and, for the most part, was much better than Jordan Binnington (as you’d expect based upon the actual vs. expected goals against seen above).

In fact, aside from his total goals saved above average at 5v5 of 3.24, Binnington found himself anywhere between average and below average this post season.  The same can be said about Murray from the high danger areas of the ice in 2017 despite being above the average in cumulative goals saved, which shouldn’t come as a total surprise given what we’ve already seen.

But in 2016?  A totally different story.  In both total and high danger goals saved, he was above average.  But his 3.37 total high danger goals saved above average was tops in the league among any goaltender that saw any amount of ice time at 5v5.  This is true about his 5.26 in all situations.  Per hour of play, he found himself ranked 9th and 5th respectively among all goalies that played 100 minutes.

All the more impressively, though, is that Murray’s 5.03 total goals saved above average was the second-most in the postseason among all goaltenders despite him only having played 11 games.  That’s frankly unbelievable.

It’s even more deserved when you consider the Blues didn’t have players like Sidney Crosby, Phil Kessel, or Kris Letang doing heavy lifting like the Penguins did or have.  One could make the argument that had those three players not put the team on their backs in 2016 and performed similarly to that of Ryan O’Reilly, Jaden Schwartz, and Alex Pietrangelo, Murray’s first playoff run would’ve garnered more Conn Smythe consideration than just a joint-4th place finish, while he saw his second run gain even less consideration by virtue of missing the first 9 wins through injury despite carrying the Penguins when they looked done and dusted against the Senators.

Still, take nothing away from Binnington; he was great this postseason and a big reason why the Blues are your Stanley Cup Champions.

Note: All data comes via NaturalStatTrick.com.