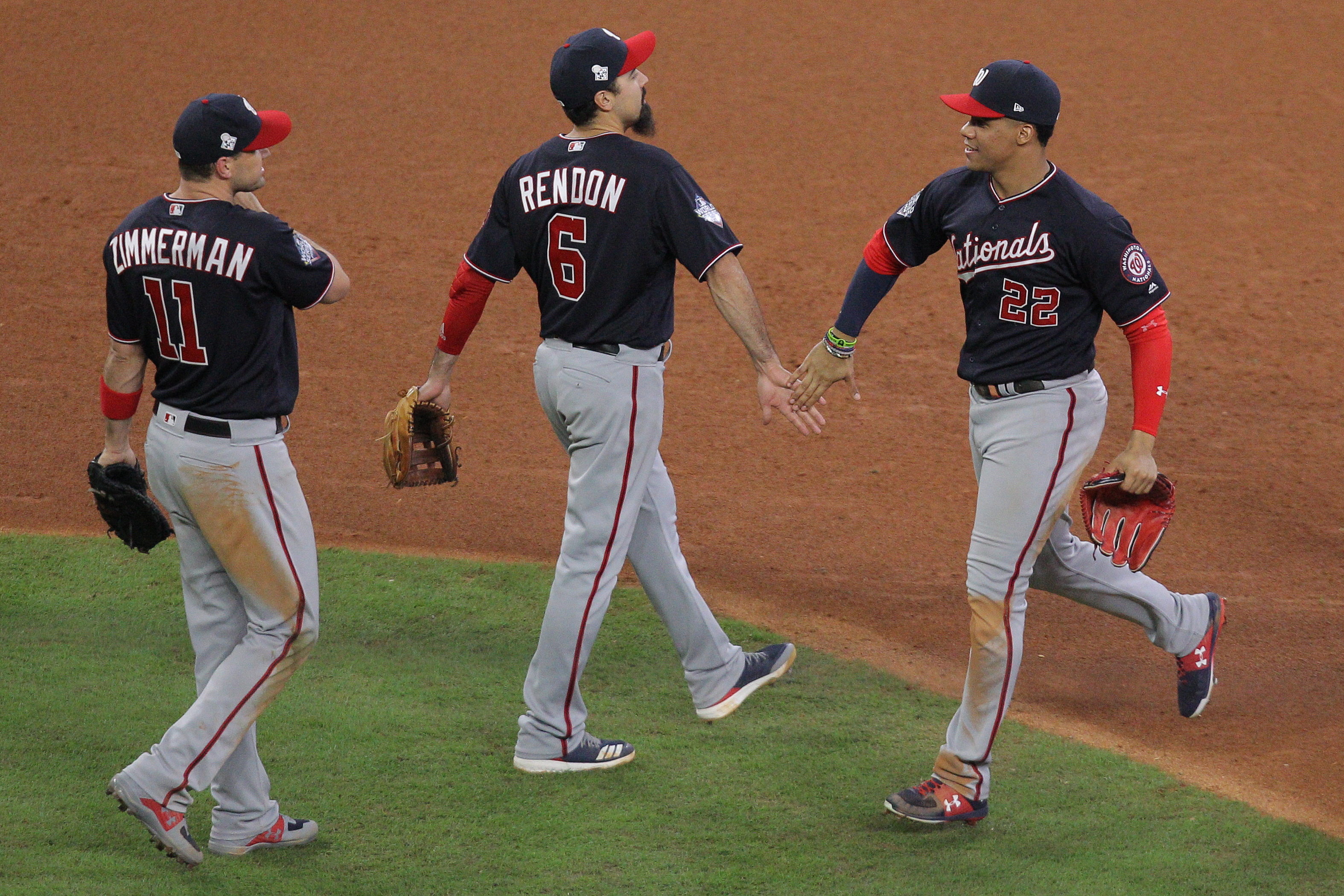 Baseball is a funny game, isn’t it?

Heading into the 2019 World Series, general consensus was that the Houston Astros were favorites to win their second title in three seasons over the Washington Nationals. Even though the Nats were hot and swept the St. Louis Cardinals in the NLCS, they had a week-long layoff to potentially get rusty, while the Astros won a hard-fought ALCS against the New York Yankees in six games.

Both teams boast elite starting rotations, but with both Gerrit Cole and Justin Verlander starting the first two games in Houston — a place where the Astros won a league-high 60 games during the regular season — it was easy to think the AL champs had an advantage.

But then, you know, baseball happened. The Nats tagged Cole for five runs to give him his first loss in what feels like 10 years and kept it going the next night against JV. How often have the Astros lost consecutive games with these two on the hill? Not very often.

Just how improbable was this 2-0 lead for the Nats?

This is the 3rd time all year (reg+post) that the Astros have lost consecutive games that were started by Gerrit Cole and Justin Verlander (in either order).

It's the first time they've done that AT HOME this year.

Between coming back and beating the Los Angeles Dodgers, dismantling the Cardinals, and taking a commanding 2-0 Fall Classic lead, Washington has now won eight straight playoff games by a combined score of 57-20 (!).

The rotation is getting the job done, and the usual suspects — Juan Soto and Anthony Rendon — are supplying offense. However, Ryan Zimmerman has also been contributing quite a bit, as has NLCS MVP Howie Kendrick.

You know the most striking thing about the Nats right now, though? They’re just having a blast. And sure, it’s hard to not have fun when your squad is on an eight-game winning streak, but still, the amount of fun they’re having in the dugout is amazing. They look like a team that doesn’t feel any pressure and also has nothing to lose.

Check out how they got ready before the first pitch was thrown on Wednesday:

These @Nationals should really loosen up. 😂 pic.twitter.com/MvxLGYqOxn

And after Adam Eaton hit a homer, everyone took their positions to celebrate appropriately (fast-forward to the 40-second mark for the good stuff):

And, you know, someone has to play the drums. That’s a role that Soto is happy to fill:

Juan Soto on the drums pic.twitter.com/O4z0oOhB3n

Nothing would be right if Washington’s unofficial mascot wasn’t watching this all happen, either:

There are countless examples of Nats players having so much fun over these past two days, but the above videos and pictures are a good indication of what’s going on in that dugout during nine-inning games lately.

Just at a quick glance, it looked like the Astros are the much better team, and on paper, that’s probably true. Although taking win-loss records into account isn’t a perfect strategy, Houston’s 107 victories is far superior to Washington’s 93. However, let’s not forget what The Athletic‘s Jayson Stark pointed out while drawing historical comparisons:

Records since the start of play on May 24:

So, the Nationals have been just as good as the Astros since the end of May. And over the first two games of this World Series, they’ve been playing like a much better team. With the Fall Classic now shifting to DC for Game 3 on Friday, the Nats are in the driver’s seat and probably won’t feel a ton of pressure. All of the pressure is on the Astros because they’re “supposed” to be winning. We know that baseball doesn’t always pay attention to that, though.

The Nationals came into this series as underdogs with nothing to lose, and that’s still the case. The other constant during this time? Well, that’d be the fact that they haven’t lost a game in a while.