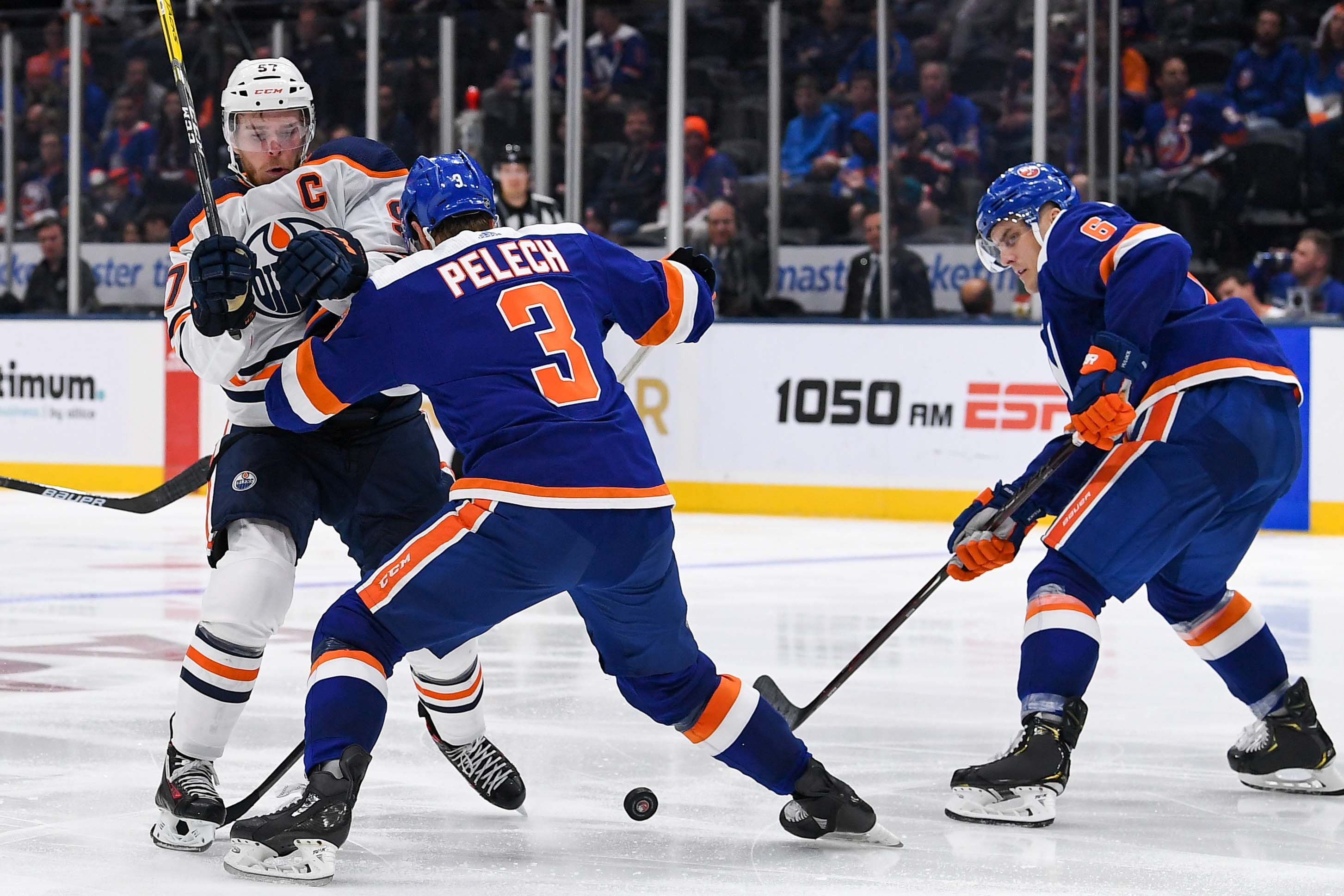 It’s hard to imagine that many Islanders fans envisioned Adam Pelech being such a big part of the team’s blue line just a year ago. However, the 25-year-old has become part of a young defensive group that has helped stabilize the Islanders’ defense under Barry Trotz.

Alongside defensive partner Ryan Pulock, Pelech has been a strong presence on the Islanders’ backend and he’s been racking up the ice time. Pelech leads all skaters in ice time this season, averaging 21:38 through 16 games.

It’s just a few seconds more than the Islanders’ other defensive stalwart, Pulock.

“He’s been so reliable. He breaks up so many good plays with a good stick,” Islanders coach Barry Trotz said. “Positionally he’s very sound. His decision making is extremely good and he’s got range. He’s got lots of rang in terms of that stick and handles weight in the corners and around the net.”

That was all certainly on display on Saturday when the Islanders hosted the Florida Panthers. Pelech, who saw 19:32 of ice time, was able to get back and break up several chances for the Panthers.

Pelech’s 42 blocked shots lead the Islanders so far this season and his 14 takeaways are third-best on the team.

“I just think I’ve been pretty steady back there,” Pelech said. “Obviously playing a lot of minutes against a lot of the top guys you need to be steady and reliable. I think that’s the main thing I’ve done well.”

It’s a part of Pelech’s game that he has aimed to keep consistent since he made his NHL debut back on Nov. 13, 2015.

“I’ve always tried to be as reliable as I can and steady as I can,” Pelech said. “Whenever I can chip in elsewhere that’s great, but I think being steady is the base of my game.”

What has also helped, according to Pelech, has been his pairing with Pulock. Pelech and Pulock were drafted a year apart from one another, the former being selected in 2012 and the latter in 2013.

Since then, the two have gone through the Islanders system and have played with one another in Bridgeport and now in the NHL. As Islander Insight’s Stefen Rosner noted, Pulock’s offensive ability has sometimes masked his defensive input, both of which have benefited Pelech.

“We’ve played together for a while now, especially since we were drafted here,” Pelech said. “He’s a really talented player and he does a good job of getting us out of trouble. … He’s also a really skilled offensive player, so he opens up a lot of space for other guys.”

While Pulock is viewed as the more offensive of the two, Pelech has the ability to put up some points of his own. He recorded his first multi-point game of the year last Thursday against the Pittsburgh Penguins, with a goal and an assist.

But it’s the overall game that Pelech brings that gives Trotz so much confidence in the young defenseman.

“He’s been a solid consistent player for us since about game 20 last year,” Trotz said. “I think he knows that I trust the hell out of him in almost every situation. I think he’s playing as good as anybody in the backend defensively, for sure.”