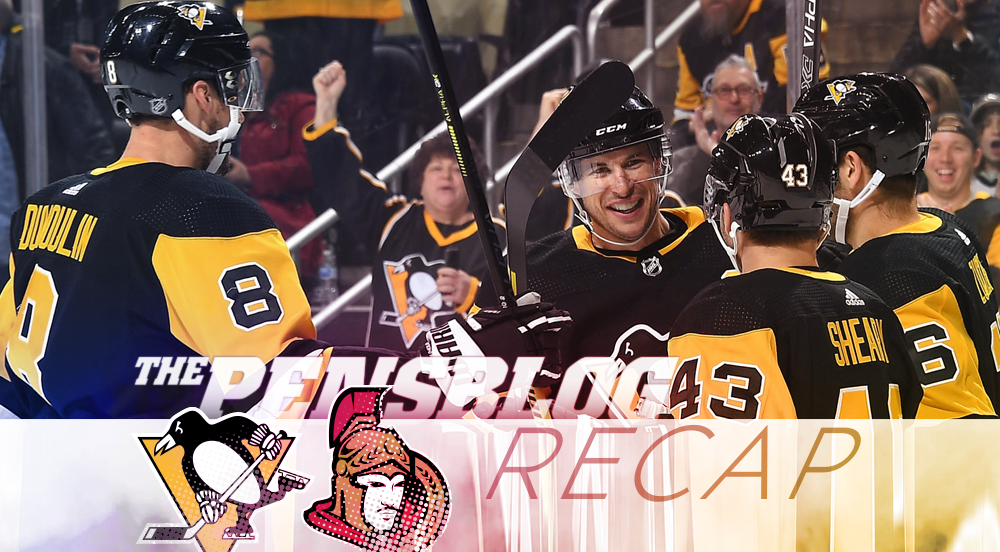 The Penguins were back in Pittsburgh last night looking to kick off the month of March in a completely different fashion than they ended February. February is the dumbest month on the calendar. Nobody is ever like “man I can’t wait for February!” Now it is over, and the proverbial March of the Penguins begins. The first opponent in the path was the Ottawa Senators.

In the days leading up to the game the Penguins announced that Dominik Simon would be out week to week with a lower-body injury, minutes before the game Brandon Tanev was scratched due to illness. On the positive front, Brian Dumoulin and John Marino both returned. With the added reinforcements the team lined up as such.

Sticks down, puck down, John Marino continues his climb to the Yinzer Hall of Fame.

ARE YOU FREAKING KIDDING ME?

John Marino picks up right where he left off. pic.twitter.com/c4og8WWlZe

Head up the whole way. Any worries that the shield would be a hindrance on Marino’s vision were erased in the first minute as Marino continues to show his offensive awareness. You simply can’t do anything but smile for this kid. Before most people could make a witty tweet about Marino scoring more than Johnson did in February Brian Dumoulin decided he would make his presence felt early as well. After receiving the puck at the point Dumoulin put a perfect pass on Conor Sheary’s stick who busted down and looked for Crosby at the top of the paint. A rare miss by Crosby resulted in a fortunate bounce and a quick 2-0 lead.

If you want to know what the difference is with good defenders playing top minutes it is this play. This is one hell of a pass by Dumoulin. When Dumo receives this puck this is his view of things:

The majority of NHL defenders are either throwing this puck on net, which is a fair play considering the open path, or dumping it around the boards. Brian Dumoulin, with his head up the whole way, takes his time and pulls up a bit to see what Sheary does. In that split second, Sheary makes the proper move and the play develops:

The great play by Dumoulin aside, a big difference between this game and the last 5 (not counting San Jose) is this Sheary shot bounced the right way.

The Penguins couldn’t maintain their pace of scoring every 50 seconds and the game settled down for a little bit until Jack Johnson was called for interference at 4:25. The Senators powerplay was about as efficient as a Senator in office and the Pens easily killed it.

Following the kill, the game went to 5v5 for 7 minutes of Penguins domination. Craig Anderson had to make several good saves to keep the Pens from going up 3-0 early. At 13:18 Bobby Ryan was called for holding a beer and the Pens powerplay went to work. The powerplay had some looks but couldn’t get anything in.

After going back to 5v5 the Senators cashed in when the newly formed Justin Schultz and Jack Johnson pairing was taken for a ride.

Really nice effort by Jayce Hawryluk here off the zone entry, and then crashing the net. That's his first goal as a member of the #Sens.

Penguins up 2-1 with three minutes remaining in the first period. pic.twitter.com/C9ShK7xdAf

The initial shot went through more bodies than Coronavirus and Murray had no hope of tracking it. Off the post, off his back, and Hawryluk walked to the net and tapped it in.

Nikita Zaitsev celebrated the goal by taking a hooking penalty a minute later. The Penguins powerplay went back to work. What looked like a broken play near the corner resulted in Evgeni Malkin having pure determination to win the puck and get it to Bryan Rust. Rust used the patience of a saint before picking his spot.

Was two goals enough in the 1st period? AS IF! pic.twitter.com/uCU9tUAQ1l

Patric Hornqvist with the behind the scenes hustle to get this goal in the net before setting the screen for Rust. You can’t say enough about the will of Evgeni Malkin on this play. He just casually handles a bouncing puck through two defenders like it is cardboard Orpik while determining his next play. As for Rust, this is a shot by a confident goal scorer. This is Rust 2020.

Rust has gone cold. But we had to figure that would happen. He's not a 30-goal guy. McCann& Tanev not scoring at all, ever, is the problem.

The Penguins would carry the 3-1 lead to the room.

Despite what felt like Penguins domination int he first period, they finished that frame with just 8 5v5 scoring chances for and 13 against. The second period was just the opposite. It was complete Penguins domination but without the results because hockey is weird. Six minutes in Tierney took a Harvey Weinstein favorite double-minor penalty for high sticking Crosby. The Penguins spent the following four minutes of powerplay time trying to enter the zone.

After the expiration of that advantage, we went to 5v5 for two minutes before Sam Lafferty was called for tripping. The Senators powerplay was as threatening as the Penguins and that was also quickly killed. It looked like the period would end with no goals despite the Penguins 21 5v5 scoring chances. That was until Conor Sheary made a slick pass from behind the net to Crosby. Sid put the puck on net and Sheary almost got a tap in rebound but no dice. The rebound was fought for by Zucker, who made a pass from his stomach back to Sid. Crosby fake pumped once then fired it to the crease off some Senators and in.

Another big difference between this game and the previous 5, this puck wasn’t bouncing off the defenders and going in.

Neither team would score in the remaining minutes and the Pens took a 4-1 lead to the room.

The Pens taking a lead into the third was nice for a change. The first line wasted no time making that lead bigger when Crosby hit Sheary entering the zone, and Sheary made a great pass to a breaking Zucker.

A few posts ago I talked about the Penguins using the classic three-man weave drill to generate opportunities. This is essentially that same drill 5-year-olds all over the world are running. The pass from Sheary is very good, it’s a shame he will not be as good as Dominik Kahun was on the third line. For Crosby, this was assist number 800 in game number 980. He becomes the 6th fastest player to the total:

He is the sixth player in NHL history to reach 800 career regular-season assists in fewer than 1,000 games. #NHLStats pic.twitter.com/Xogm1fasE0

If you’re wondering, Crosby is currently ranked 32nd all-time in assists and 39th all-time in points.

The good feelings were taken away shortly after the Zucker goal when Tkachuk took a shot from the point and deflected it off his dick and into the goal. Four minutes after the Conor Sheary was called for hooking and the Sens had a chance to make it interesting. Unfortunately for the Chabot took a tripping penalty 40 seconds into the powerplay to send it to 4v4.

Jake Guentzel scores his 20th of the year, but goes right to the room after colliding with Thomas Chabot.

The 4v4 and ensuing 40 second Penguin powerplay didn’t result in much. 9:23 into the period Dumoulin was called for hooking. The Senators got their best looks as the penalty expired, and 4 seconds after Dumo stepped back on the ice Brown made it 5-3.

The Pens fans that were still crying over a losing streak in February furiously went to Twitter to attack the lack of heart of this team while Patty Marleau made a nice drop pass to Malkin at the blue line. Geno got the biscuit back to Marleau who was now sitting at the crease. He couldn’t get the job done but the rebound popped out to the man who we knew wouldn’t score 30 goals.

This is an underrated play by Marleau. First, notice that he makes eye contact with Malkin before attempting a drop pass at the blue line. This isn’t the class Geno “surprise” drop pass. Second, he gets on his horse and breaks to the goal. This is a play a veteran who thinks the game at a different level makes, and it results in a scoring chance and ultimately a goal. I also want you to watch the gif and watch Bryan Rust. He is at the blue line and as soon as he sees Geno crossover to the forehand he anticipates what’s happening and starts moving straight to the goal. You cannot watch the Zucker-Crosby goal followed by this one and not get excited. Look out baby.

The Senators had no answers and the Penguins would not score in the remaining three minutes.