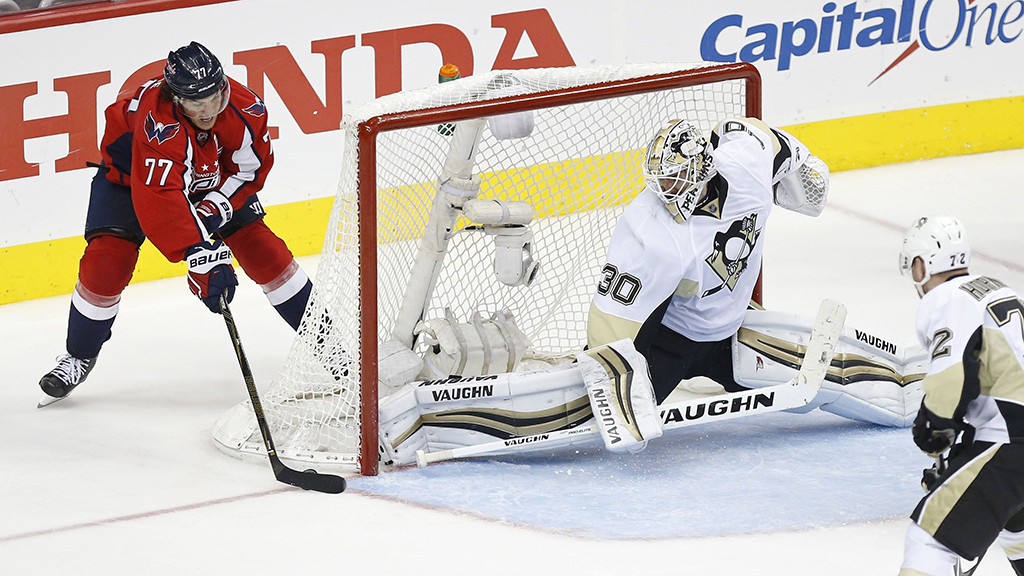 ROUND ONE SERIES RECAP

I knew it, you knew, the universe knew it.

There was no way a potential run to the Stanley Cup was going to happen without a run through the nation’s capital.

Just the thought of hearing that ridiculous, loud, overly extravagant goal horn is making your skin crawl. Seeing an arena with blue seats and every person in the building decked out in red jerseys, shirts, and other apparel has you literally, seeing red. You stiffen up when you see that #8 in the left circle with a man in the box.

But you also know that somehow, someway, no matter how good this Capitals team was throughout the regular season, they will find a way to blow it.

It’s what they do, it’s what they’ve done, and it’s often due in part by the franchise that exists at the confluence of three rivers.

120 points to end the regular season. President’s Trophy winners by a mile, with the next best team being Dallas with a gentleman’s 109, and a lineup that really doesn’t have many, if any, holes at all – you knew they were primed for disappointment.

Despite the Penguins being the hottest team in the NHL since February, the Caps never wavered throughout the season, being consistently great from beginning to end. Don’t lie, even though it’s the Capitals, you still had it in your head that this may be a task too daunting even for this Penguins team.

Even in a loss, game one should have you rethinking that. The Pens went blow-for-blow with these Capitals and it took a monumental performance from T.J. Oshie just for them to get the overtime victory.

This may be a long series so buckle the hell up.

Full-speed ahead for both teams. No big injuries to report, both got out of round one unscathed and for just the second time in seven years, we get to see Sid vs. Ovi in the postseason. You just have to love it.

The broadcast gave us a real, legitimate reason other than the usual history of Penguins-Capitals to be optimistic about this series right off the bat: In five meetings between these two clubs during the regular season, Alex Ovechkin did not have a point. Love him or hate him, he’s the most prolific scorer of a generation, blanking him in five games is no small feat.

Less than a minute in, Kunitz nearly put the Pens ahead right away off of a broken play.

Malkin tries to get a shot off the draw, Orpik pokes it off his stick right to Kunitz and a fluttering shot eludes Holtby but finds the post.

The Penguins had the better of the play through the first couple minutes, but picking up where these two left off seven years ago, it was Ovechkin, in on a breakaway, with a defender in pursuit.

Caps would get the first power play of the series after Cullen would trip up Kuznetzov. A tough call because it’s a guy changing direction getting tangled with the defender, but it is the rule and it’s getting called just about every time.

They did exactly what they needed to do except score. Their power play had been in a funk since midway through their series with the Flyers. They shot the puck and possessed it well for two minutes but the Penguins PK and Matt Murray stood up.

Ovi was in his spot all power-play long but the Pens made the middle of the ice a quagmire with no clear lane to work it to him.

Despite a good PK and a good start, the power play tilted the ice to the Caps and that goddamn goal horn would be heard for the first time this series with just under ten minutes to go in the first.

Geno tries to force a pass through the middle and Burakovsky breaks it up, springing the Caps on a 3-on-1 against Daley. He plays it well enough but sometimes the puck just bounces in ways you can’t explain.

Chimera’s shot is stopped by Murray but the rebound pops right back to Burakovsky and he makes absolutely no mistake.

Pens would get their first chance on the man advantage after Burakovsky crushed Cullen from behind. Very well could’ve been a 5-and-a-game but it’s the playoffs. Prison rules bay-beeeeeeee.

Your uncle who’s been going to games since they wore blue jerseys has fantasies about this power play. All they did was shoot. They didn’t score, though, so he’ll still call The X tomorrow to bitch about the power play.

Thanks to some solid goaltending by Matt Murray and good team defense, the Pens got out of the first period thankfully only down one goal.

Just like the first period, the Penguins controlled play to start the second.

Stifling the momentum was a penalty on Letang that made absolutely zero sense.

TJ Oshie cuts to the front of the net with his back turned and as it happened, Letang braced himself with his stick, knocking Oshie down, who for the record ran into him. This happens 99 times in a game and never gets called. Calling it here was playing-to-the-crowd officiating.

Am I bitter and biased because I am a Pens fan writing about this on Pensblog? You bet.

Do I know that we can all agree NHL officiating is wildly inconsistent? Sure do.

No matter, the Penguins’ power play was aggressive, fast, and effective. Other than a shot by Justin Williams right into Murray’s glove, the Penguins got the better chances and killed the penalty with ease.

Then it was time to go to work.

Of all people to tie this one up, if you had money on Ben Lovejoy, get your ass on a plane, get to Vegas and start betting on everything.

Lovejoy joins the rush and acts as the third forward, Nick Bonino pulls the ole’ Bugs Bunny trick against Orlov and Schmidt, goes inside out, causing them to collide and gets a clean look at Holtby.

His shot is stopped but Lovejoy jams home a second opportunity and we’re even.

My cause of death will be Pierre constantly saying “malfunction at the junction.” And Matty Niskanen. And Kristopher Letang. He’s bad.

While I was ruminating in the awful that is Pierre McGuire, Evgeni Malkin told the Caps that’s a nice lead they had, be a shame if someone stole it.

Less than a minute after tying it, Geno would fool Holtby with a backhand shot that really had no business going in – but it did.

A line change occurred while the Pens had possession in the Caps zone and no one picked up Geno, giving him the entire middle of the ice to get a pass from Kunitz, a look at Holtby and he beats him cleanly over the shoulder.

There are so many little things to love about hockey, chief among them is the sound of a puck grazing the post as it goes in.

Unfortunately, didn’t last long at all.

Maatta with an egregious turnover to Oshie and he was off to the races.

Maybe it’s the rivalry, maybe it’s because he’s in the Eastern Conference now but man, Oshie. What a villain. I do not care for him!

Shortly after the goal, Malkin would absolutely blow up Tom Wilson with a devastating hit. Wilson, as he’s known to do, cried about it and went after Malkin. Geno was rightly rung up for embellishing but the fact that Wilson can put Geno in a figure-four leg lock and cross-check him after a clean hit and it takes that extra embellishment for it to have any whistle is quite the indictment of the NHL.

The most notable thing to happen after the Oshie goal in the remainder of the second period was Kris Letang’s stick getting full-on stuck in Jay Beagle’s helmet.

Win the period, steal home-ice advantage, and head into game two in control seemed like the perfect script.

For the third straight period, the Penguins had the better of the play to open up but it was a bad bounce and a leaky goal that would put the Caps ahead again.

Ovechkin would have a shot blocked that happened to end up on Oshie stick through either a bad bounce or a hope pass, it was difficult to tell. Oshie swoops in and somehow sneaks a backhand shot through Matt Murray.

Now, before you read this next part, I need to make sure you’re sitting down and are not taking a sip of a drink or a bite of food because what comes next may shock you.

Guy is going to be a pain the ass for the duration of the series. Just have to ignore him and heed HCMS’s words: Just play.

A huge scrum in front of Holtby would turn into a Penguins’ power-play with Kuznetzov going to the box. It was negated immediately after Kessel’s skate got stuck in, of all people, Jay Beagle’s skate.

A play that rarely ever leads to anything managed to work for the Pens in order to tie this one up.

Ian Cole rims the puck around the boards from behind the Penguins net, Hagelin smartly gains the red line and tips the puck so it doesn’t become icing. Bonino in pursuit gets a piece of Orpik to get possession for the Pens.

Kessel comes barreling in to keep possession and works it low to Hagelin and with this, Bonino sees two Capitals converging on Hagelin and Kessel, giving a free lane to the front of the net for a give-and-go.

Hagelin immediately senses this, gets it back to Bonino and bang biscuit, we’re tied at 3.

God damn that line is so good.

Something about goalies giving up bad five-hole goals this game.

Speaking of goalies, both teams traded chances but none bigger than another Ovi breakaway on an unrealistic play by the Capitals.

Niskanen would sky the puck up out of the defensive zone, then Backstrom would lacrosse/baseball-style the puck up the ice to Ovechkin. Letang stumbled in transition and Ovi was all alone.

Cold as ice. What a save.

Let’s just get right to it.

About halfway through OT, Oshie would end it.

Sometimes, you just get lucky. Dumoulin does well to keep Oshie to the outside, he goes behind the net and tries for the wraparound.

It just barely crosses the line.

This series won’t be short and won’t be easy. Buckle up.