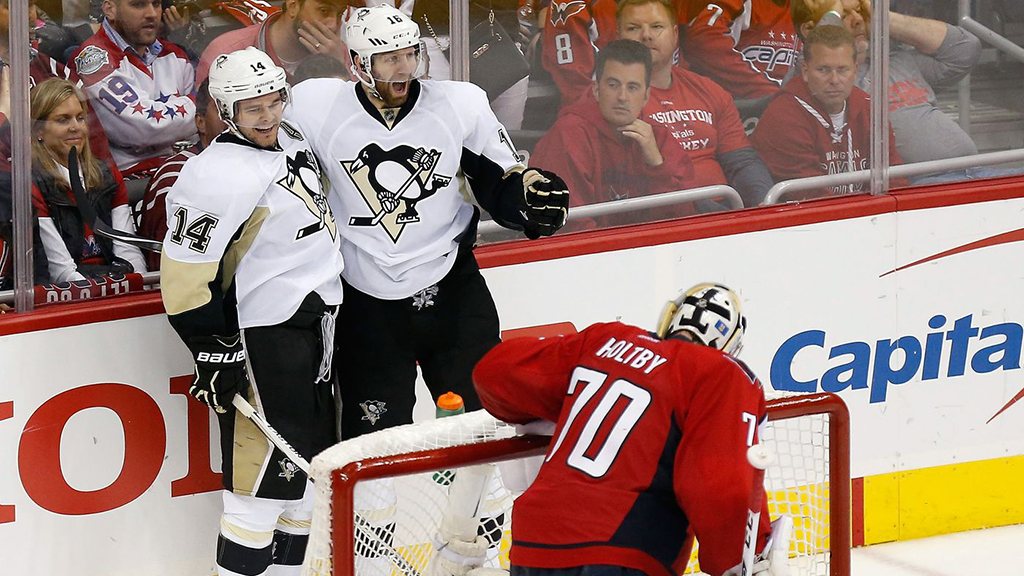 You know what’s more fun? Beating your rival in their building in the playoffs.

You know what’s even more fun? When one of their long-time, homegrown talents is on your team and scores the game-winner for you.

This was a masterful road performance by the Penguins in game two. After a tightly-contested game one loss, the Penguins played well defensively, got a stellar performance from Matt Murray, and possessed the puck enough to create chances that made it seem, if not for Holtby, they should’ve won by multiple goals.

An unreal stick lift then pass from Evgeni Malkin to Eric Fehr put this one away for the Guinos and stole home-ice advantage right away from the Capitals.

No changes, no need. Game one was a coin flip.

As stated in the introduction, if not for Brayden Holtby, the Caps get smoked this game.

Neither team scored but the Penguins possessed the puck and threw 14 shots at the cage.

Remember when we acquired Phil and all the talk was how he was nothing but a pure shooter?

One of the Caps only and best chances came with under five remaining.

Just an unrealistic pass by Johannson to Kuznetzov. Daley plays it right and you can tell Geno had no expectation of it getting through. Muzz, cold as ice again.

No score after one but the Pens held the Caps to a mere five shots on goal.

Keep that fact in your back pocket.

It didn’t catch a lot of coverage in the broadcast but after digging into the stats, Oshie’s shot on goal that counted as the fifth of the first period with 1:03 left would be their last until an Ovi shot with 5:12 remaining in the second.

These Penguins are known to be fast and full of offense but as I said in the Rangers series, don’t sleep on their ability to shut a team down and play good team defense.

In between all of that would be another bang-bang play by the hottest line in all of hockey.

Bonino and Kessel work to free the puck with Hagelin in support.

Once the Penguins get possession the Caps completely lose Hagelin who Bonino sees cutting to the net and works it to him. Hagelin goes top-shelf.

When the Caps finally got their shot on goal, it was during a flurry where the only thing keeping Murray from making a stop was Kuznetzov trying not so subtly to sit on Matt Murray.

Schmidt, either because he’s that dumb or tried to sell, thinks he’s tied the game. Ref says no way.

An absolutely surgical period by the Penguins on the road. Not a lot to highlight because the Penguins kept it simple and again held the Caps to a mere five shots on goal.

You knew the Caps were coming and they certainly did in the third period.

With Letang in the box and the Caps threatening, they finally solved (can I say solved? He faced like 11 shots to this point or something, whatever, he kept making saves, shut up) Murray.

Murray does his best to make a save through a screen and gets some but not all of it. Williams and Johansson probably both get a piece of Carlson’s shot on the way in so it’s already tough to track. Murray can’t hold it and Johansson has a yawning cage and taps it in.

Tough but when you can’t get anything going in a game, keeping it simple is really the best way to go about it.

The Caps woke up after the goal and from there, Murray was called upon to keep this one even and did he ever.

Can’t be understated how important that save on Ovechkin is. Caps pretty much carried the play for several minutes in a tie game, at home, after 40+ minutes of looking very pedestrian. If Ovi scores there, the house comes down. Even in a game where the Penguins dominated, the Caps were bailed out by Holtby for two periods, leaving them in a position to still win this one.

From there, the Penguins pounced.

Not a lot to break down here. Another simple goal, this time for the Pens.

Fehr cuts to the net leans on his stick and Orpik and gets a piece of Geno’s shot.

Murr would stand tall after the Caps pulled Holtby and we’re heading back to Pittsburgh tied at one.

Win game three and this could be a short series.