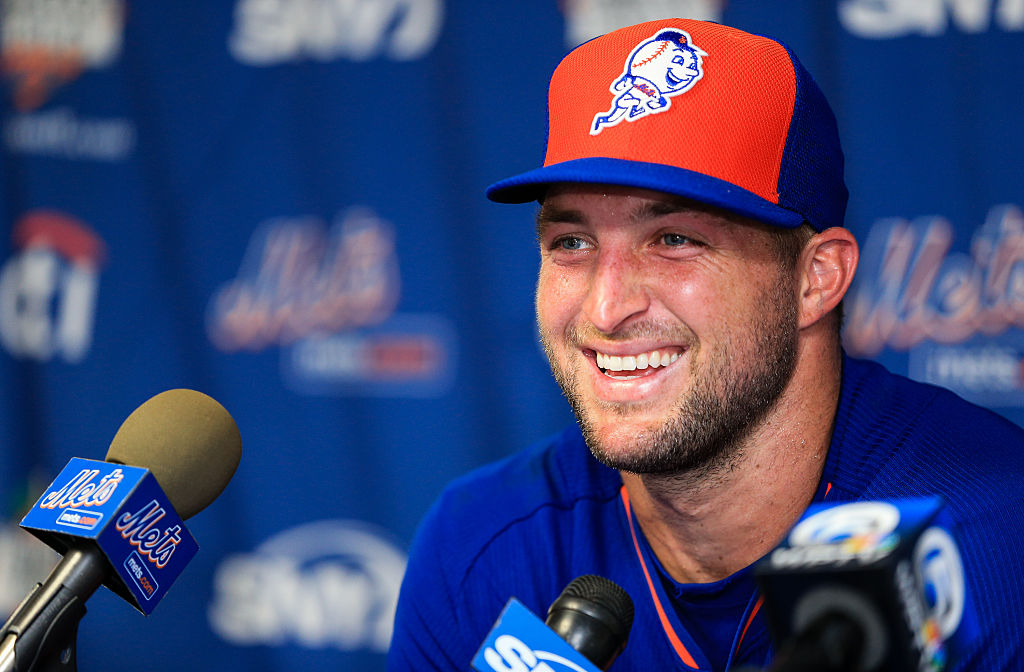 The New York Mets’ most famous minor leaguer is planning on coming back in 2018. Outfielder Tim Tebow, who made headlines last year by switching to baseball after several failed attempts to play in the NFL as a quarterback, is expected to return to the Mets’ farm system next season, ESPN.com reports. The Mets started off Tebow in Low-A Columbia this year before promoting him to High-A St. Lucie at mid-season. In 124 games across the two levels, the 30 year old Tebow is batting .223 with eight homers and 52 RBI’s in 422 at bats.

PORT ST. LUCIE, FL – SEPTEMBER 20: Tim Tebow #15 of the New York Mets speaks at a press conference after a work out at an instructional league day at Tradition Field on September 20, 2016 in Port St. Lucie, Florida. (Photo by Rob Foldy/Getty Images)

There has also been some speculation that the Mets could consider promoting Tebow to the major leagues this September in an effort to sell some tickets in a lost season. There are reasons to consider a call up for Tebow, both in terms of selling tickets and merchandise but also in terms of fielding a roster. The Mets have been extremely depleted in the outfield of late, with both Yoenis Cespedes and Michael Conforto out for the remainder of the season. The only active outfielders on the roster are Juan Lagares, Brandon Nimmo, and rookie Travis Taijeron. This has forced Mets’ manager Terry Collins to get creative with his outfield, using infielders Jose Reyes and Matt Reynolds in corner outfield positions during the last week. The only other healthy outfielder on the 40 man roster is Wuilmer Beccera, who is only in A-ball and had a tough season.

While there is a case to be made that having Tebow up would help in the short term, the issue is that bringing him to the big leagues would require adding Tebow to the 40 man roster. 40 man roster spots are precious in baseball, and the Mets will need as many as they can going forward. If the Mets need to waive Tebow off the 40 man roster there is a chance that another team would claim him just to boost their ticket sales in the minors, exactly what the Mets hope to get from him next season. While it would certainly be interesting to see Tebow in the majors the odds of it happening this season don’t appear to be great.