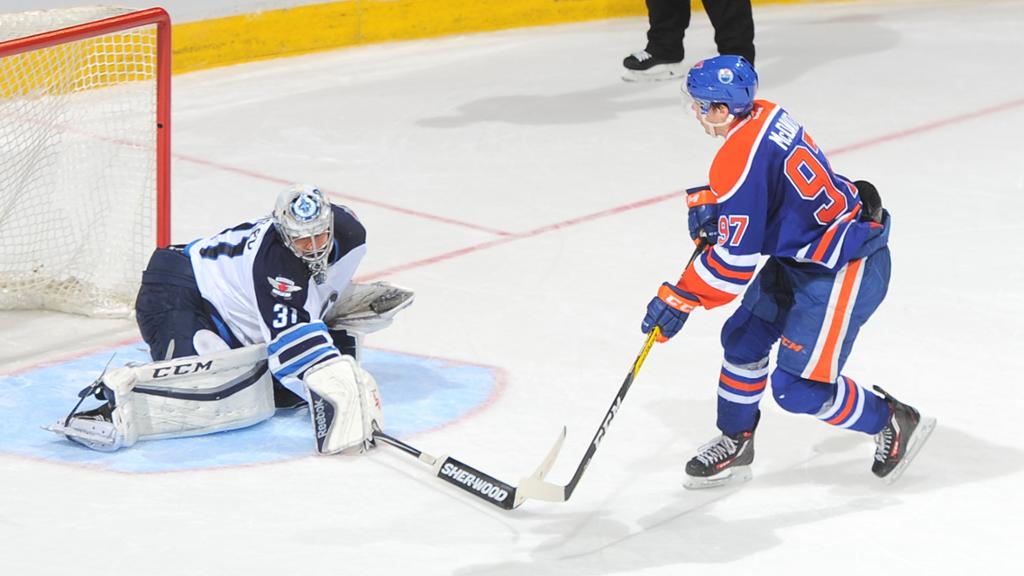 After sweeping the split squad games with Calgary on Monday night, the Oilers will be back on the ice tonight against the Winnipeg Jets in Manitoba. The Oilers will be going with a younger squad tonight, and will be giving some players who didn’t suit up on Monday a chance to make an impression in game action.

Laurent Brossoit will start the contest and split the game with Nick Ellis. While the two combined for the win in Calgary on Monday night, neither was overly dominant in net. Ellis struggled late while Brossoit let up a goal early into the contest. It’ll be interesting to see if one or both of these goalies can bounce back tonight and play a solid game.

Defensively, the Oilers will debut their likely new second pairing as Kris Russell and Matt Benning suit up and will play together. I think this is the best case scenario without an addition for the club, because Benning plays a somewhat similar style to Sekera and Russell is able to play on his natural side. This is a big game for both of them and I suspect they get a high total of ice time as the bottom two pairings are both AHL-level groups.

Those other two pairings will be Ryan Stanton and Eric Gryba playing together and Yohann Auvitu teaming up with Ryan Mantha. Auvitu looked good on Monday night and could make a strong case for a roster spot with another solid outing. Mantha and Stanton will be making their preseason debuts, while Gryba is likely a shoe-in for an NHL job in two weeks.

Up front we will get our first look at Jussi Jokinen, who is skating with Ryan Nugent-Hopkins and Kailer Yamamoto. That’s surprising because Yamamoto is skating in the spot that Jesse Puljujarvi had been in during the first few practices. I wrote about it this morning, but Puljujarvi didn’t look great Monday and Yamamoto has done nothing but impress since draft day.

We’ll also get a look at the presumptive fourth line tonight as Mark Letestu, Zack Kassian and Jujhar Khaira will skate together for the second time during this exhibition season.

Other forwards in the lineup tonight include Chris Kelly, Joey LaLeggia, Patrick Russell, Joe Gambardella, Brad Malone, Ty Rattie and Mitch Callahan. As you can see, there is a real Bakersfield flavor to this group heading to Winnipeg.

The Jets will also dress a number of young players tonight, but their lineup will be mostly veteran. Steve Mason will see time in between the pipes, while Dustin Byfuglien, Jacob Trouba, Tyler Myers and Dmitry Kulikov all dress on the blueline. Up front, we’ll get a look at Patrick Laine, Blake Wheeler, Bryan Little, Mark Scheifele, Nikolaj Ehlers and Mathieu Perreault, as well as former Oiler Matt Hendricks.

The young Oilers will certainly have their work cut out for them tonight.

There’s a lot to keep an eye on tonight, but for me the top story is Kailer Yamamoto getting a push. If the youngster has a good outing tonight, he could position himself to make a serious run at a roster spot. This is also going to impact Jesse Puljujarvi, as I highly doubt the Oil will carry two rookies up front in the top-six this year. A real competition could be brewing between these two.

Chris Kelly will be interesting to watch tonight as well. I don’t think he was great on Monday, but the Oilers clearly want another look at him as they see if he fits this roster. He needs to stand out in someway, shape, or form and soon. I think the same goes for Ty Rattie, who has been silent so far in camp.

Lastly, I’ll be keeping my eye on the Russell-Benning pairing and Yohann Auvitu. The Russell-Benning unit is going to be relied on from the get-go this season, and how they play will likely dictate if the Oilers make a move for a defender before camp breaks next weekend. As for Auvitu, another good outing could bring him closer to being the team’s seventh defender.

According to reports, we will see more cuts tomorrow as the Oilers continue to shape their roster. I think it is a good bet to assume that some of the players in tonight’s game get sent packing after tomorrow’s practice. That within its own right will be interesting to watch.