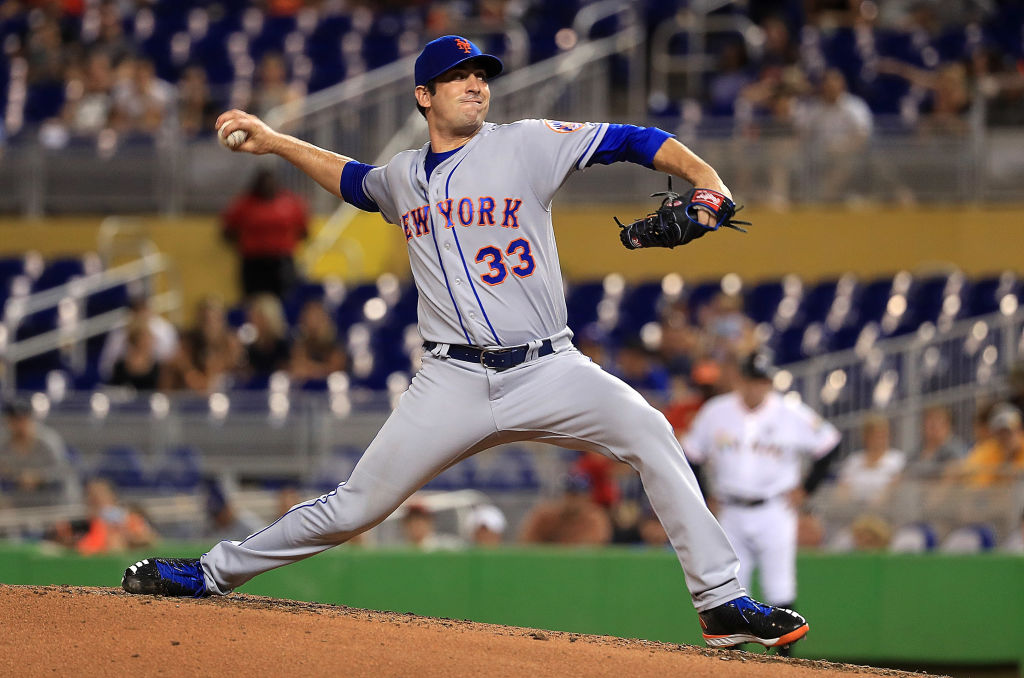 2017 has been another lost year for Matt Harvey, who has looked like a shell of himself for the second straight season. Harvey is 5-6 with a 6.59 ERA on the year and has only struck out 62 batters in 84.1 innings pitched. In a scenario that is hard to believe, Harvey has actually looked worse since returning from the disabled list in September, pitching to an ERA north of 13 in four starts. The poor performances have led to questions about whether or not the Mets should tender Harvey a contract in 2018. The Mets don’t appear to have those concerns, with General Manager Sandy Alderson indicating that it is “highly unlikely” that Harvey is non-tendered, Mike Puma of the New York Post reports.

MIAMI, FL – SEPTEMBER 18: Matt Harvey #33 of the New York Mets pitches during a game against the Miami Marlins at Marlins Park on September 18, 2017 in Miami, Florida. (Photo by Mike Ehrmann/Getty Images)

Harvey is slated to earn about $6 million in 2018, which isn’t an insignificant amount of money, but the Mets feel confident taking a gamble on their former ace. Alderson noted that there are positive signs for Harvey, such as his velocity starting to creep up recently, and indicated he thinks Harvey simply needs to regain his confidence. With the season over anyway, the Mets will let Harvey make his final two starts in hopes that he ends the year on a positive note. Harvey has been one of the worst pitchers in the league for two years now, but his massive upside does make it worth a gamble to retain him in 2018. If things turn around and Harvey looks more like the 2013-2015 version of himself, the Mets will have an ace level pitcher for six million dollars.

There is also another motivation to retain Harvey, and that is avoiding egg on the team’s face. If Alderson lets Harvey go for nothing and he immediately recaptures his old form, the Mets will look like idiots for letting one of the best pitchers in the game go for nothing. The Mets are highly sensitive to criticism for letting players go who become stars elsewhere (see Murphy, Daniel and Turner, Justin), so six million dollars is a small price to pay to avoid embarrassment. If Harvey is able to get it together, he will either help the Mets win in 2018 or be dealt at the deadline for some big pieces to boost the farm system. On the other hand, if Harvey shows more of the same the Mets will simply let him walk after the 2018 season.