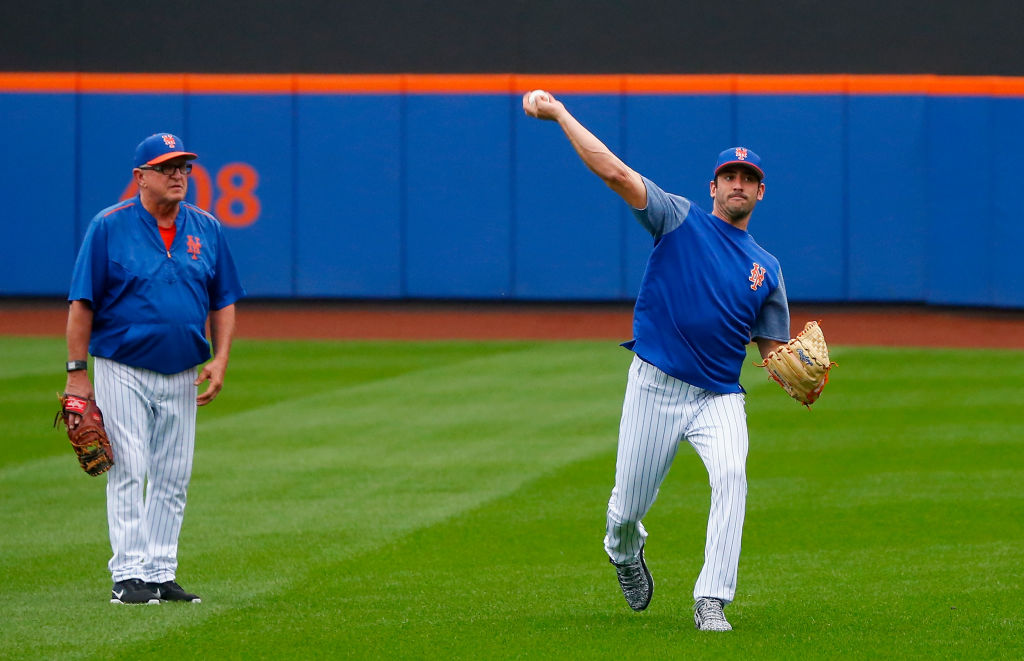 With reports swirling that Terry Collins is not going to be back, many have wondered who will be the New York Mets’ new skipper. There hasn’t been much attention paid to the rest of the coaching staff, which includes renowned hitting coach Dan Long and the longest tenured member of the staff, pitching coach Dan Warthen. Warthen drew tremendous praise for his work developing the team’s young pitching staff and was reportedly set to retire before the group fell apart this season. The unit’s struggles led Warthen to consider coming back for one more year, but the front office has other ideas. Mike Puma of the New York Post reports the Mets are expected to let Warthen go after the season.

NEW YORK, NY – SEPTEMBER 06: Matt Harvey #33 of the New York Mets throws on the field before a game against the Philadelphia Phillies as pitching coach Dan Warthen #38 looks on at Citi Field on September 6, 2017 in the Flushing neighborhood of the Queens borough of New York City. (Photo by Jim McIsaac/Getty Images)

Warthen has been the Mets’ pitching coach since the middle of the 2008 season, when he replaced Rick Peterson, but the unit’s struggles will likely cost Warthen his job. Entering play yesterday, the Mets’ pitching staff had an ERA of 5.02, which was the second worst in the major leagues. Two early candidates to replace Warthen are bullpen coach Ricky Bones and minor league pitching coordinator Ron Romanick. One person not expected to be considered, according to Puma’s sources, is Triple-A pitching coach Frank Viola. External candidates for the position could include Red Sox’ director of pitcher development Brian Bannister, who played for the Mets, and former A’s pitching coach Curt Young. Young has a strong working relationship with Mets’ General Manager Sandy Alderson. Whoever ends up with this job will have the critical task of fixing the Mets’ talented young pitching staff. The Mets’ hopes this season were wrecked thanks to poor performances from the group, which entered the year as one of the most highly touted units in baseball. That makes this hire one of the most important decisions Alderson will have to make this winter.