UND vs. UMD: A Look Forward 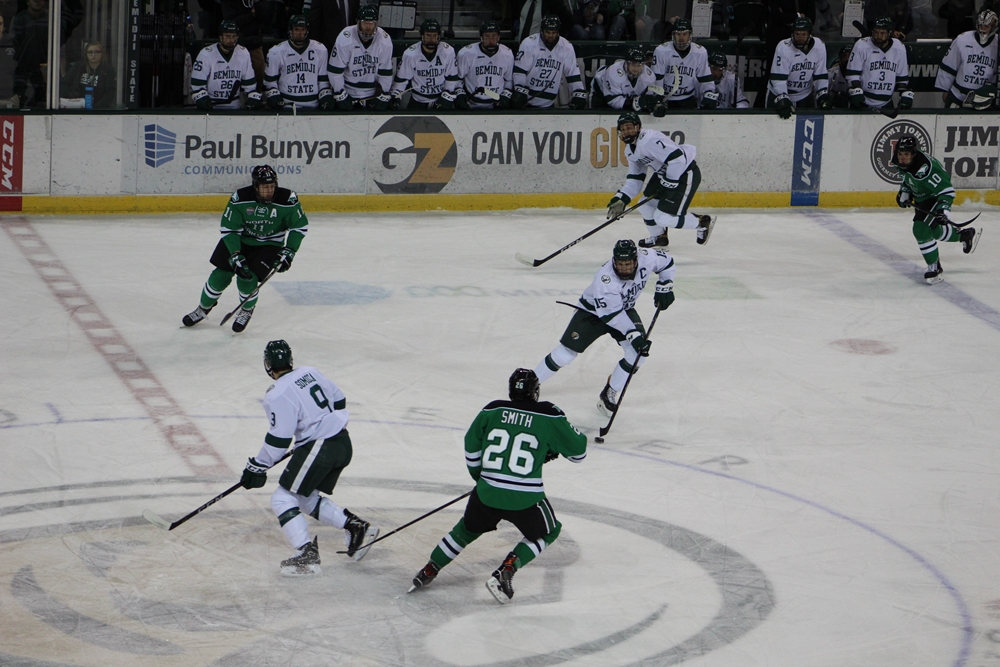 UND vs. UMD: A Look Forward

After dominating the Bulldogs (4-1-0) during the 2015-16 season. The Bulldogs have turned the tables on the Fighting Hawks and have beaten them in six straight games, outscoring them 25-10. UND is looking to break that streak.

UND head coach Brad Berry says that his team is ready to go and knows what’s on the line.

“They’re a well-coached team,” Berry said. “I think both programs mirror each other. The way they play. The way they develop players. The way they have success from year-to-year. I know one thing; our guys know that we’re going to be ready. Last year wasn’t the results that we wanted from our group. It’s going to be a good weekend, knowing that it’s the only weekend we play them until the postseason.”

Senior forward Trevor Olson is from Duluth and looks forward to this series every year. This is Olson’s last trip to Duluth, unless UND implodes and ends up facing the Bulldogs in the first round of the NCHC playoffs at Amsoil Arena. That’s unlikely to happen. Olson and his teammates are chomping at the bit to meet the Bulldogs.

“My sophomore year, we won pretty much every time (we played) against them, Olson said. “Last season, they beat us five times. Obviously, we have a little pit in our stomach, going in there. They’re a good team.  Especially, late here. They got a bunch of guys back from World Juniors, and back from injury. We’re just excited for this challenge.”

Keep an eye on Riley Tufte

According to the UMD game notes, sophomore forward Riley Tufte has scored 19 goals during his brief collegiate hockey career. Nine of those goals (21.0 %) have come against UND. Last season, in his five games against the Fighting Hawks, Tufte scored nine goals and was a plus-five.

Thumbing through the game note for this weekend’s series, something stuck out. UND has played in 24 games this season and the Fighting Hawks have had 24 different lineups. Meaning each game’s lineup sheet has been different. Per Jayson Hajdu, UND has had 24 different lineups that have included 47 different forward line combinations and 10 different defensive pairings. UND has lost 50 man-games due to injury or illness.

Last Saturday night, after making the 24th consecutive lineup sheet, coach Berry was asked if he is frustrated with all of the lineup changes.

“Yeah, absolutely,” Berry said. “When you think of the Gardner line and how they’ve been playing and leading by example on and off the ice; they get things going, then Rhett’s not in the lineup tonight and you’ve got to change again and that changes all the lines.

“It is what it is. What’ll happen is guys get experience now. They’re getting reps and hopefully, this experience pays off at the end of the year.”

A couple of weeks ago, while I was having a discussion with another writer in the press box. I suggested that we put Shane Gersich on a milk carton because he was struggling to score points. Gersich has caught fire scoring five points in the last four games. Another player that’s been snake bitten is forward Grant Mismash, the freshman from Edina Minnesota hasn’t scored a point in over a month, and scoreless in the last five games.

Let’s take a look back. I am sure that Bulldog fans will love this one.