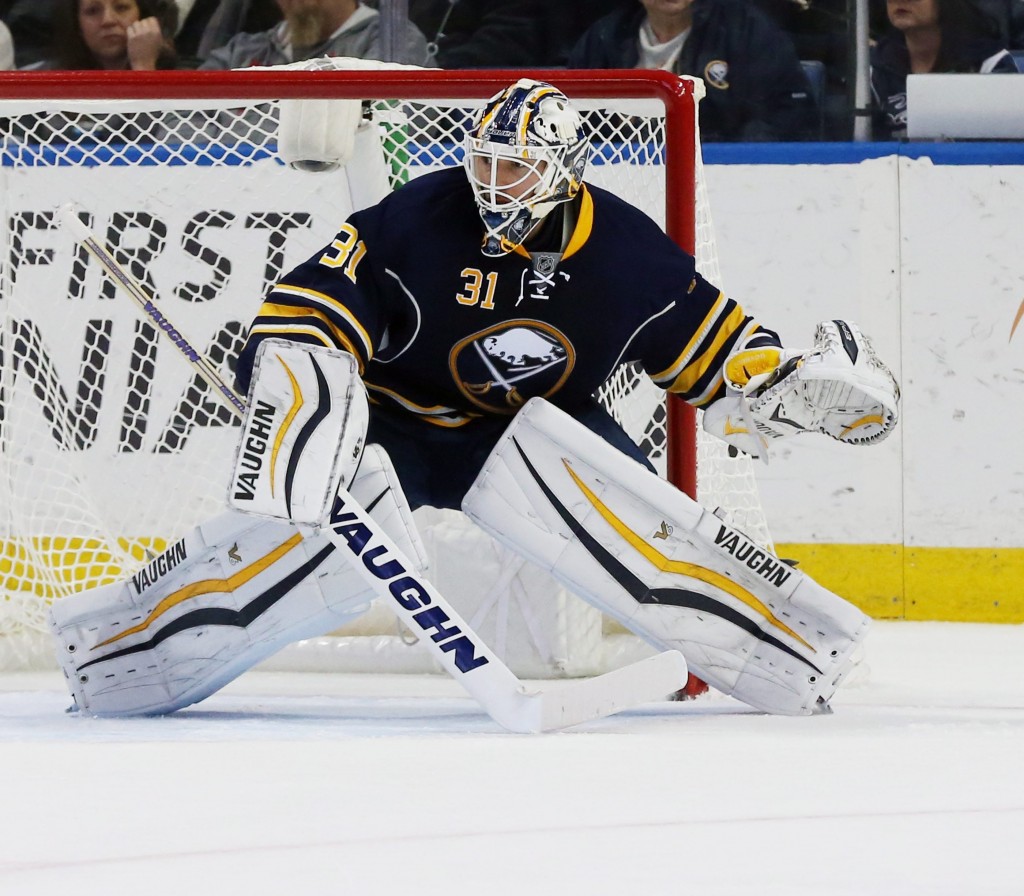 In the summer of 2016, the Edmonton Oilers top choice for their backup goaltending position was free agent Chad Johnson. Johnson, however, decided to sign with the Calgary Flames. That left the Oilers to find another option, which ended up being Jonas Gustavsson. We all know how that experiment went.

Two years later, the Oilers are once again looking for a backup option who can handle 20-25 games in a season and who can push Talbot. Once again, Johnson will head to unrestricted free agency on July 1st and appears to be a good fit for the Oilers.

Peter Chiarelli signed Johnson once before in Boston, will he do it again this summer?

Johnson signed a one-year, $2.5 million deal last July 1st with the Sabres after completing one season in Calgary. Buffalo, once again, bottomed out this season and frustrations began to boil over with some of the veteran players. Johnson was among that group of veterans, and publicly voiced his displeasure with the season.

In addition to that, Sabres GM Jason Botterill has said that the club anticipates prospect Linus Ullmark to make the jump to the NHL next season. If the club brings Robin Lehner back or looks for another starting option, there just isn’t room for Johnson in Buffalo.

Considering how Johnson felt about this past season, I don’t think he’ll be too upset with that reality.

Johnson has seen his workload increase the last three seasons, hitting the 30 game mark in each campaign. He’s emerged as a legit backup option that can eat up minutes and provide decent play in net. The problem this past season, however, was the team in front of him.

Buffalo, from day one of the season, was one of the worst teams in hockey. As a result, Johnson’s numbers really, really suffered. In 36 games, Johnson went 10-16-3 with a .891 SV% and a 3.55 GAA. On the face of it, those numbers are awful, no way around it. That said, I’d encourage you to look at just how poorly Buffalo played this year and just how bad that defensive group was this season.

Here’s a look at Johnson’s scouting report via The Hockey News.

Assets: Has a good frame for the goaltending position at the National Hockey League level. Is capable of dominating at lower levels. Is also capable of coming into games cold, which adds value as an NHL backup.

Flaws: Could stand to fill out his 6-3 frame even more to add more stamina for the National Hockey League level. Also needs more consistency in his game. Might not be good enough to be more than a backup.

Pretty simple answers to this question. Johnson is an established backup in the NHL and that is the role he should play. In Edmonton, where I think he is clearly better than Al Montoya, that is exactly the role he would play.

He fits Edmonton’s needs at the position.

It’s very likely that Johnson, coming off the worst season of his NHL career, will be getting another one-year contract. Teams aren’t going to want to invest multiple years in a goalie who will be 32 when next season begins and who didn’t play his best last year.

In terms of pay, I’d expect Johnson to be forced to take a pay cut from $2.5 million he made last year. Perhaps a one-year deal at $1.5 million gets it done with this player.

It appears that Peter Chiarelli and the Oilers are looking for backup options that will give them more than one year of cover at the position. Not every plan works out, however.

In the event Edmonton has to go to plan B, Chad Johnson represents a really strong option. Outside of a bad 2017-18 in Buffalo, Johnson has been a strong backup option his entire career and will be motivated heading into next year.

He’s likely only a one or two year option, but he’d fill a hole in Edmonton’s lineup at the present time and would improve the team at a position that arguably sunk them in 2017-18.