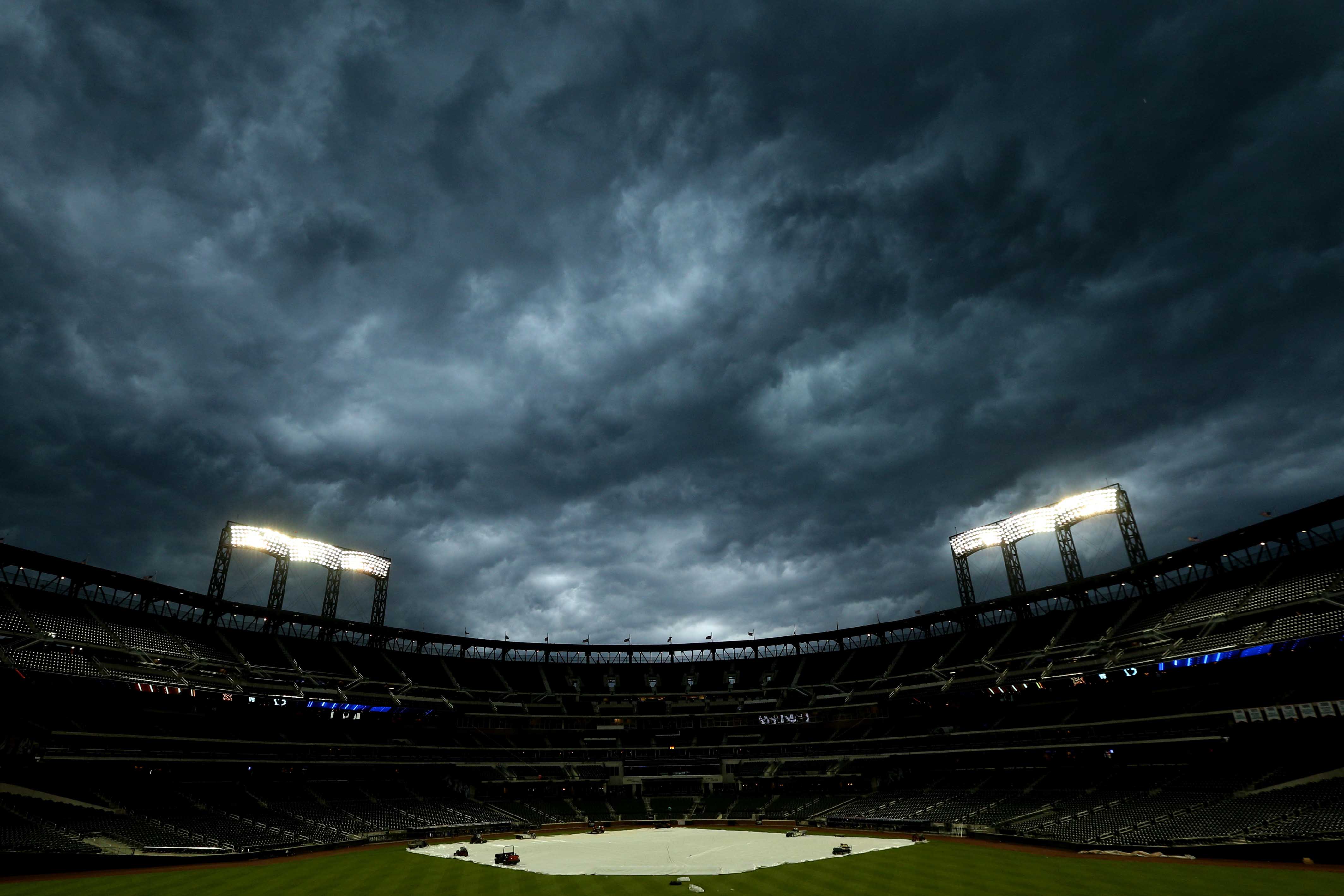 The New York Mets have an off day today, their second in four days. That won’t be a feeling they can get used to for a while. Thanks to some highly questionable scheduling, the Mets got two days off this week and will now begin a 17 day stretch without a day off tomorrow. To add insult to injury, the Mets will play 18 games over that span since they have to make up a rain out in Atlanta with a day/night double header on Memorial Day. For a team that is just 9-18 over their past 27 games, this stretch could sink them if they aren’t careful.

May 15, 2018; New York City, NY, USA; General view of a tarp on the field as storm clouds move in over Citi Field before a game between the New York Mets and Toronto Blue Jays. Mandatory Credit: Brad Penner-USA TODAY Sports

The stretch begins with the Mets wrapping up a six game homestead with the NL West leaders, the Arizona Diamondbacks, and the Miami Marlins. The Mets will then hit the road for eight games in seven days, including a four game set with the Milwaukee Brewers and four games in three days against the NL East leading Atlanta Braves. The stretch wraps up with a four game series against the Chicago Cubs before the Mets finally have an off day on June 4th.

Aside from the Marlins, every team the Mets play over the next 17 days has a winning record. The Mets also won’t have Yoenis Cespedes for at least the first six games of this brutal run since he landed on the disabled list with a quad injury today. Todd Frazier should (hopefully) be back from his DL trip tomorrow, which will help, but the Mets need to get better play out of their lineup and pitching staff to simply survive this stretch.

With how the Mets are playing, any fan would sign for a 9-9 record over these 18 games. That would be a significant improvement in how the team has played for the better part of a month, and it would come in spite of getting two thirds of the starts in that stretch from Zack Wheeler, Steven Matz, Jason Vargas, and a potential spot starter. It is too early to say that the Mets need to win most of these games, but they can’t afford to come back with a 6-12 mark either. Doing that would put the Mets below .500 on the season, and coming back in a tougher than expected NL East would be difficult from that position.