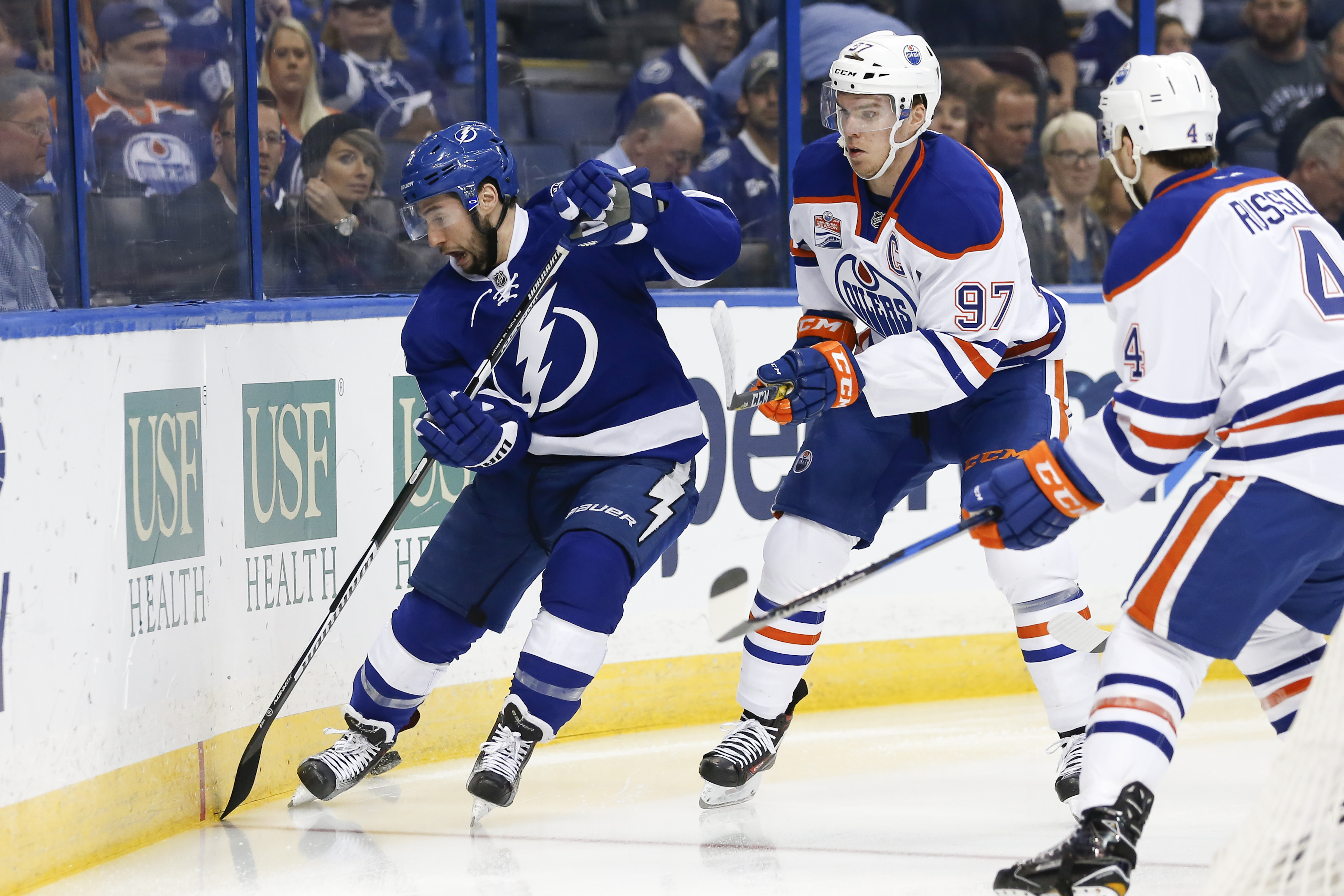 The toughest back-to-back set for the Edmonton Oilers this season, at least on paper, comes to an end tonight. The Oilers, fresh off a 4-2 loss in Washington last night, will take to the ice to battle the Tampa Bay Lightning in the first of two meetings between the sides this season.

It is the third of a four game road trip for the Oilers, who are 1-1-0 at the halfway mark. Prior to last night’s loss in Washington, the Oilers topped Detroit by a 4-3 margin on Saturday.

Mikko Koskinen looks to keep the good times rolling for the Oilers in goal, while Andrei Vasilevskiy is expected to start for Tampa Bay.

Edmonton: Start on time! The Oilers didn’t play poorly in Washington last night, in fact one could argue they were the better team for long stretches. The problem? Edmonton started slowly and spotted the Capitals a two goal lead. You won’t win many games that way. It’s imperative for the Oilers to start off well tonight.

Tampa Bay: Attack, attack, attack! Edmonton’s defense is a mess in the bottom two pairings right now while Tampa is one of the best offensive teams in hockey. Averaging 3.50 goals-per-game, Tampa should be able to generate ample offensive chances tonight if attacking.

Edmonton: Ty Rattie returns to the lineup tonight for the first time since October 11th. Rattie will replace Drake Caggiula on the top-line, playing right wing with Connor McDavid and Ryan Nugent-Hopkins. Rattie has fresh legs and is ready to roll, so it will be interesting to see how he looks after taking nearly a month off.

Tampa Bay: Mikhail Sergachev had a great rookie season for the Bolts a year ago, and is now a mainstay on Tampa’s defense. I’ll be keeping a close eye on the young puck-mover tonight. He’s got potential to be the next great defender in Tampa Bay and is a lot of fun to watch.

The Oilers are making some changes after last night’s loss, as Rattie is joined by Kailer Yamamoto and Kevin Gravel in the lineup tonight. Jujhar Khaira, Jesse Puljujarvi and Jason Garrison are expected to take a seat up top, while Drake Caggiula shifts to the fourth line.

Danick Martel, claimed off waivers from Philadelphia prior to the season, is expected to be a healthy scratch for Tampa Bay tonight. Joining him is likely to be forward Ondrej Palat, who hasn’t played since October 26th. Victor Hedman is currently on the IR, while Cameron Gaunce is the likely healthy scratch on defense.

This will be the first of two meetings on the season between Edmonton and Tampa, who will conclude the season series on December 22nd in Edmonton. The sides have split each of the last two season series, with the home team winning all four meetings.

The Oilers have never won a regular season game on the NBC networks since they took over the broadcasting rights in the NHL prior to the 2005-06 season. Over that span, the Oilers are 0-6-0 on the network. Tonight’s game will air on NBCSN. It’s the second half of a back-to-back and the third game in four nights.

Tampa Bay takes this one 4-1, with the goals coming from Stamkos, Kucherov, Sergachev and Joseph. Edmonton’s one tally? Ryan Strome’s first point of the year.