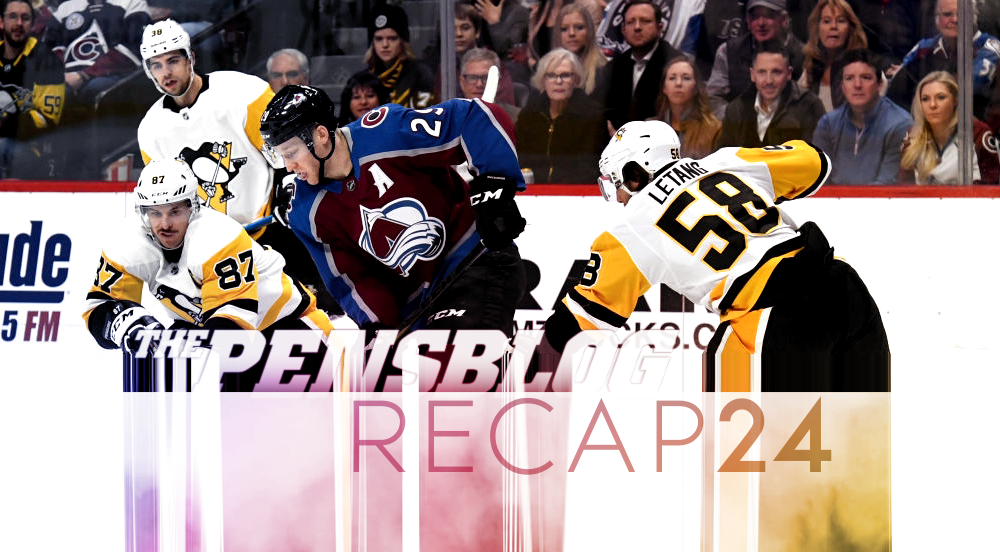 Welp, the Penguins 5 game point streak is over.

They were absolutely dynamite, playing a little game where they one-upped each other at every turn as their lines matched up against one another all night that included Cole Harbour, Nova Scotia’s Nathan MacKinnon potting 1G-3A for his 6th straight multi-point game (and 8th in his last 9) and also saw Cole Harbour, Nova Scotia’s Sidney Crosby score all 3 Penguins goals.

The Penguins had won 38 consecutive regular season GP in which one of their players recorded a hat trick. The last time they lost such a game was Feb. 19, 2007, when Ryan Malone had the HT on Long Island in a 5-6 loss.

Of their 23 shots on goal at 5v5, 7 of them came from high danger areas, compared to that of the 2 they allowed.

So, obviously, they were getting to the high percentage scoring areas and limiting the Avs from doing the same.  In fact, the Pens had an expected goals for of 2.44 at all strengths and 2.22 at 5v5 (per Corsica).  The Avs, on the other hand, settled in at 0.99 and 0.89, respectively.

Translation: The Pens weren’t 3 goals worse than the Avs and on another night, they’re are on the other side of a 6-3 decision.  That other night may come Tuesday.

After downing the Jets the night before, HCMS elected to not make any changes to his personnel, save for flipping Rust and Phil! as he did to end the game.  Jarry got the nod in the second of a back-to-back against a familiar foe in Philipp Grubauer.

From the opening puck drop and for about the first 8 or so minutes, it was all Avs, led by their electric first line of Babe Landeskog, Cole Harbour, Nova Scotia’s Nathan MacKinnon, and Mikko Rantanen.  And while the Pens didn’t register their first shot of the game until the 11:54 mark, a full 35 after the Avs opened the scoring and didn’t levy their second until 13:30 into the game, and despite the Avs having more then or as many goals on the board as the Pens had shots during that time, the Pens weren’t actually all that poor for the last 12 or so minutes of the period.  But, they were behind after 20 minutes of play.

Great cover from Cole Harbour, Nova Scotia’s Sidney Crosby to get over and take away the passing lane and block the pass to Landeskog on the back door, but it wasn’t enough to strip the puck from Rantanen.  It also wasn’t enough for Guentzel to find his man creeping in.

Rantanen, however, did find Guentzel’s man as Girard activated from the point to take the feed and rip one by Jarry, who was maybe a little deep in his net after coming off from being tight to his post with Rantanen controlling the puck below the goal line to his left.  Breakdown City.

Just 49 seconds into the 2nd period, Cole Harbour, Nova Scotia’s Sidney Crosby went off for holding the stick of Babe Landeskog, only to have the penalty negated 19 seconds later by Kerfoot high sticking Jack Johnson.  The Avs were buzzing, but a Phil! pass break up on the 4v4 kept it a one goal game (and another play midway through the third to keep it a tie game), albeit temporarily.  Was led to believe he doesn’t play defense, but whatever man.

But following the expiration of the penalties, the Avs would double their lead despite the gameflow being in the Pens favor, heading the other way as Malkin broke the puck out from behind his own net.  ZAR would pick it up in the neutral zone with speed, wheeling in and throwing a backhander that was blockered away by Grubby to turn the Avs loose the other way, winning a bit of a disjointed battle at center ice in the process.

Andrighetto burrowed into the corner, beating a flat-footed Dumoulin and circling back towards the point, feeding Erik Johnson for the slapper.

Dumo did well to retreat straight to the front of the net and let Letang chase Andrighetto, but in doing so and tying up Kerfoot in front, he made contact with Jarry and the two of them screen the netminder, really preventing him from even standing a chance on Johnson’s shot.

Then, just over 2 minutes later, it looked like we could’ve all went to bed as the Avs just started to suffocate the Penguanos.  On Cole Harbour, Nova Scotia’s Nathan MacKinnon’s third straight rush up ice on this singular shift, he’d finally get that elusive goal he was trying to create.

However, the Peng weren’t going away and with under a minute to play in the 2nd, they got themselves on the board finally after the Avs spent a considerable amount of time in the Pens zone.  However, as they went from low to high to set up Zadorov for a bomb, he broke his stick and Crosby was off.

Nice little quick up from Guentzel, but what a play from Crosby to see he could cheat and go with no cover in behind Zadorov.  Grubauer was big to make the first save, but Crosby was not to be deterred in jamming home the rebound.

Then, just 37 seconds later, the Pens would find themselves back on the PP for the 3rd time on the night.  And right off the draw, despite Crosby losing it, Phil! got right in Former Penguin Defenseman #28’s mouth, causing him to throw a useless backhander up the wall right to 87.  No way in hell should that ever go in from there, but the warlock is going to do what the warlock do.

The punch-counter punch game 87 and 29 were playing was always going to spill over into the 3rd period and in the early going, it looked like 29 was going to deal the Penguins the death blow.

I mean, this is just bananas.  He’s at a complete standstill behind the net, then hits a few quick crossovers and he’s in the high slot, dangling around Johnson and ZAR and Phil! and Brassard to set up the good Johnson for a missile.

But a minute later, Cole Harbour, Nova Scotia’s Sidney Crosby and his 2 sons jumped over the board, getting into the Avs zone and going to work down low, getting a couple of looks at Grubauer before kicking it up to Riikola for the point shot.

What a deflection from 87 initially, but then to pivot so quickly, get body positioning on Girard and shield him from making a play on Simon’s pass is something else.  First one wouldn’t go, but the rebound would.  Three goals in the span of like 5:34 for Cole Harbour, Nova Scotia’s Sidney Crosby and first NHL point for Riikola.  Give Simon his 9th primary assist on the year, too.

Then, about 5+ minutes later, it was Cole Harbour, Nova Scotia’s Nathan MacKinnon’s turn with the Pens threatening this time.

Brassard, out on a shift with Pearson and Simon on the ice, was below the goal line looking for one of the other two in front of the net.  His pass just wouldn’t connect and Cole Harbour, Nova Scotia’s Nathan MacKinnon was off to the races.  His speed through the neutral zone pushed Maatta and Rikola back further than they would’ve liked as the Avs top line came in on the 3v2.

Unrelenting, the Pens continued to search for that equalizer over the last half of the period, but just weren’t able to solve Grubauer, whose save with about 3 minutes to play on Simon has to go down as the biggest reason the Pens didn’t get a point out of this game.

That save set the stage for Jarry to vacate his cage for the extra skater.  While the Pens were still hovering around, threatening to score, the Avs top line had other plans.  Cole Harbour, Nova Scotia’s Nathan MacKinnon looked like he could’ve scored about 8 goals on the 6v5, but an impossible backcheck from Cole Harbour, Nova Scotia’s Sidney Crosby with a little delay tactic from Letang kept him from scoring on his 7th of 8.

But as the Pens tried to get back into the offensive zone, a miscue between Phil! and Geno gave the puck away to Former Penguin Defenseman #28, who turned and dumped the puck down below the Pens goal line.

There, Landeskog went after Letang, kicking his leg out from under him in one of the more dangerous and dirty plays you’ll see.  When the dust settled and Cole Harbour, Nova Scotia’s Nathan MacKinnon found the puck and buried it into the empty cage, Letang lost his goddamn mind over the missed call, rightfully so.

Look, you can make the case for the linesman not signaling icing.  Letang was already retreating when Former Penguins Defenseman #28 sent the puck down the ice and 58 took a long, curved path to go back and retrieve to try to buy the icing.  That doesn’t get called like half the time.  But for the referee, standing like 10 feet away, to miss that kick out?  That’s inexcusable.

And before the fans even had a chance to settle down and hear the goal announcement, the puck was in the back of the Pens net again.  Grant won the draw, JJ73 threw the puck at Grant at center ice, only for it to end up in Grubauer’s possession.  He shipped it north to Nieto to hit Calvert streaking across the NZ with body position on Johnson.  Oleksiak pulled over to try to seal off the wall, thinking that was where Nieto was going with it, meaning Johnson didn’t have anyone covering for him over the top as Soderberg roamed free in the middle of the ice, beating everyone to Calvert’s touch pass and firing a dart by Jarry to suppress any doubt.

The Pens get a few days off to travel back home for a 3 game home stand starting Saturday night when the Flyers come to town before seeing this Avs team again next Tuesday.  Go Pens.