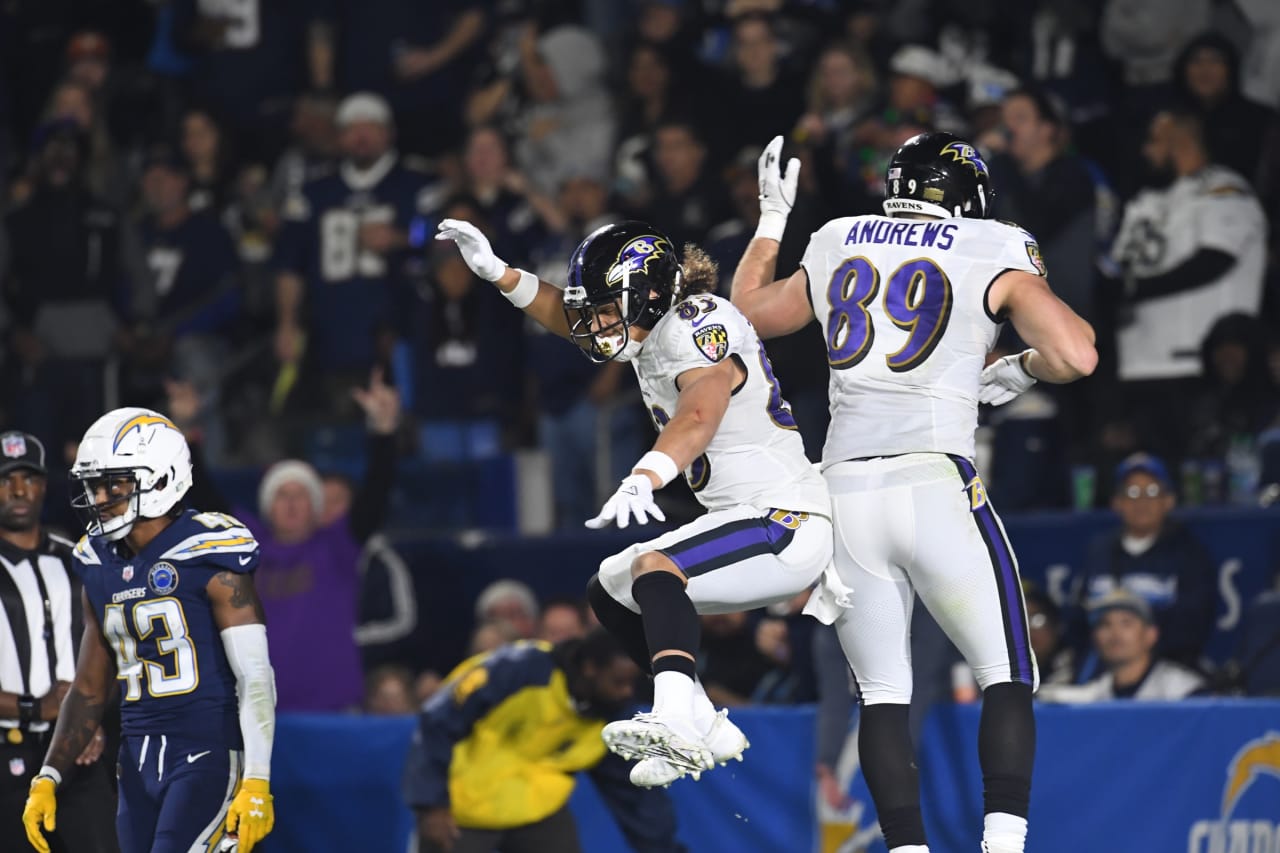 How long can the Ravens’ ancient-but-new college offense keep working to dominate time of possession and refresh their defense to heights not seen since…well, since Lamar Jackson was two years old?

“…this wild, unforgettable, so-strange-it’s-true Ravens season has been nothing if not one of continual reinvention. And when the moment called for it, there was overlooked inside linebacker Patrick Onwuasor, punching the ball loose from Antonio Gates a split-second before the tight end was down. There was Tavon Young, the slot cornerback with a nose for loose balls, picking up the fumble and sprinting down the sideline. There went the Ravens, about to put away maybe the AFC’s hottest team with a 62-yard defensive touchdown and 22-10 victory, likely moving just one victory away from their first playoff appearance since 2014.”—Jonas Shaffer, Baltimore Sun

With the win at StubHub Center, the Ravens (9-6) authored another defensive masterpiece — 198 yards allowed, three turnovers forced — and made their playoff path straightforward. If the Pittsburgh Steelers lose Sunday to the New Orleans Saints, the Ravens need only to win their regular-season finale against the visiting Cleveland Browns to claim their first AFC North title since 2012. That would secure at least the No. 4 seed and a home game in the wild-card round. A rematch with the Chargers (11-4) in Baltimore could beckon.

Saturday’s victory was not easy. It required a couple of career highs through the air from Lamar Jackson. He finished 12-for-22 for 204 yards, his first time over the 200-yard threshold, and the highlight went to a favorite target.

A month ago, Jackson found Andrews for a career-high 74-yard completion — but the catch-and-run ended short of the end zone. On Saturday, with the Ravens trailing for the first time all night, 10-6, Jackson delivered a perfectly placed pass to Andrews over the middle. Andrews, only 23, delivered a grown-man stiff-arm to safety Jahleel Addae and coasted to the end zone, safety Adrian Phillips in his wake.

“Mark got open, made a great catch, the stiff arm — I know y’all seen that,” said Jackson, who was limited to 39 yards rushing but improved to 5-1 as a starter. “Y’all have that on ESPN. And he was just off to the races. He didn’t get caught from behind like Oakland, man. He did a great job.”

“I’m proud of our guys. So many of them stepped up and made plays,” coach John Harbaugh said. “Our guys were winning the 1-on-1 battles and our coverage was real good.”

Baltimore got a win against a Los Angeles squad that had already clinched a playoff spot with wins in 10 of its last 11 games. The Chargers’ loss, which drops them to 11-4, deals a big blow to their hopes of winning the AFC West. Kansas City can wrap up the division title and a first-round playoff bye with a win at Seattle on Sunday night.

“We couldn’t get them off the field on defense. And we couldn’t stay on the field on offense,” Chargers head coach Anthony Lynn said. “We got outplayed. We got outcoached. It’s just that simple.”

Baltimore led 6-3 at halftime but the Chargers took the lead less than two minutes into the third quarter on Melvin Gordon‘s touchdown from a yard out. The Ravens got the ball to start the second half but Chargers rookie safety Derwin James forced Kenneth Dixon‘s fumble, which was recovered by Melvin Ingram at the Ravens 21 and returned 3 yards.

“We turned it over so it was up to us to go back down and score,” said Jackson, who also rushed for 39 yards. “It was play action. Mark got open and made a great catch.”

The Ravens’ defense, which came into the game as the top-ranked unit in the NFL, frustrated the Chargers most of the night. Philip Rivers — who went 23 of 37 for 181 yards — was sacked four times, threw two interceptions and didn’t have a touchdown pass for the first time this season.

Baltimore converted three Los Angeles turnovers into 10 points. The Ravens were up 16-10 with 2:40 remaining when Patrick Onwuasor forced Antonio Gates to fumble and Tavon Young scooped it up and returned it 62 yards for a touchdown.

“I saw a couple opportunities where I could punch the ball out and that was one of them. Once I punched it I didn’t know if he was down or not,” Onwuasor said.

Baltimore’s Gus Edwards had 92 yards rushing on 14 carries. Nearly half his yards came on the Ravens’ first offensive play when he went 43 yards up the middle for his longest run of the season. It was also the longest rushing play the Chargers have allowed all season. The rookie has rushed for 578 yards over the past six games.

It ended up being a great 48 hours for Harbaugh. On Friday, the Ravens announced their longtime coach will be back next season. Some had wondered if Harbaugh’s 11th season in Baltimore would be his final one because the team has reached the postseason only once since winning the Super Bowl in 2012.

“This is about our guys in the locker room and us. We’re fighting to accomplish something,” Harbaugh said.

The Ravens will face the up-and-coming Cleveland Browns on December 30 at M&T Bank Stadium for another test of their Christmas wishbone.